How many apologies are sufficiently genuine to accept? 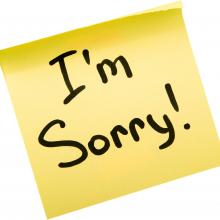 Photo: Getty Images
When it comes to accepting an apology, don't fake it, writes Gina Barreca.

It's an unnerving place to be. Some of us are more at ease cheating on our taxes, getting into a bar fight or leaving an occasional spouse than withholding our forgiveness. Walking away from a person who says "Forgive me" without replying "It's no big deal" - even if we've been eviscerated by what they've done to us - is considered dishonorable.

Talk about blaming the victim.

But none of us is obliged to accept every apology. Feel free to snip this column out of today's paper, post it to your Facebook page or have it tattooed on the back of your hand in case you need to be reminded.

Sometimes an apology is like a marriage proposal, or the chance to invest in a start-up, or the email offer of $2.6 million from a stranger who has chosen you as heir to her dead husband's fortune: It's not always in your best interests to greet it with unadulterated enthusiasm.

How to tell a legitimate apology from an ersatz one? If it starts with "You must forgive me" or "You've got to understand why I had to," you have my permission to shut it down. This form of address removes the possibility that you have any choice in the matter.

If the apology includes instructions for you - "Promise you'll never bring this up again" or "Swear you'll never tell anyone" - you can take that one off your list too, unless it's returned with substantial revisions. You don't have to accept anything that comes with caveats or riders.

"I'm sorry you took it that way," "I didn't realise you were so sensitive" and "Give me another chance" aren't even apologies, despite occasionally masquerading as them, so we can cross them off the list. You're the one being asked to change or admit your own weakness; someone who is genuinely asking for forgiveness accepts responsibility and offers to make amends.

It's tough not to accept an apology, because we've been instructed since birth to forgive.

Every major religion, ethical system and children's cartoon series instructs us that in order to remain a member in good standing, we must find within ourselves an unlimited wealth of forgiveness to offer those who have wronged us.

As a good little Roman Catholic girl, I memorised everything in preparation for my First Communion in order to serve God - and also because I couldn't wait to get into that white dress with the ruffles on the big day.

The phrase "Forgive us our trespasses" confused me, as did "As we forgive those who trespass against us." I'd seen NO TRESPASSING signs nailed across the doors of abandoned buildings or hanging from chain-link fences. Why didn't everybody get one of those?

The rules would be clear, and nobody would forget. When I asked that question, I recall that it was met with derisive laughter (nothing wrong with a little ridicule in a CCD class).

In 2019, the idea no longer sounds quite as funny.

The easiest and most socially convenient thing remains accepting the apology immediately, or at least appearing to. Brushing off the past, dismissing the initiating incident as unimportant and shaking hands while chuckling "No hard feelings" can offer a good imitation of renewed fellowship.

But that's not how the heart works, is it?

In 1945, author Jessamyn West put the difficulty of this issue in perspective: "She intended to forgive. Not to do so would be un-Christian; but she did not intend to do so soon, nor forget how much she had to forgive."

If you're faking it when you accept the apology, you're engaging in hypocrisy and betraying yourself as well as the other person who will, no doubt with relief, accept your words at face value.

It diminishes you to lie, and it falsifies the other person's sense of self to believe they are forgiven when they are not. You'd put yourself in the position of owing that person an apology.

Revenge, we all know, is a dish best served cold. In contrast, both sincere regret and authentic forgiveness are only available - often after long preparation - when they are offered with genuine warmth. - TCA