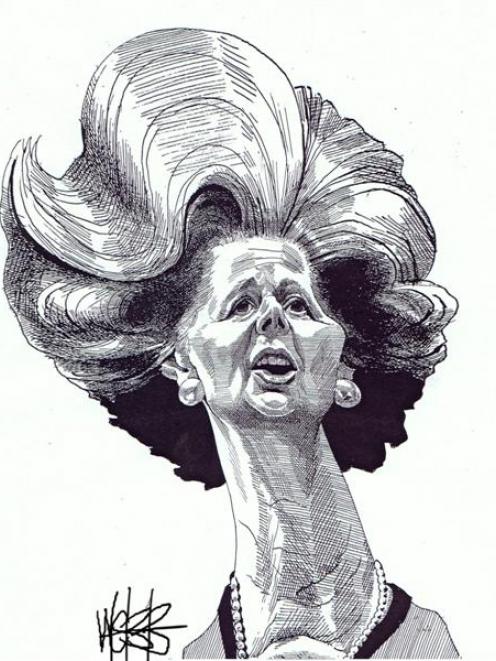 Baroness Thatcher.
Margaret Thatcher was the woman who began the shift to the right that has affected almost all the countries of the West in the past three decades.

She died in London on Monday, at the age of 87, 34 years after she became Britain's first female prime minister and 23 years after she was driven from office. But it is an open question whether even the crash of 2008 and the ensuing prolonged recession have finally ended the long reign of her ideas in Western politics.

''This woman is headstrong, obstinate and dangerously self-opinionated,'' wrote some minion in the personnel department of British chemical giant ICI, rejecting young Margaret Roberts' application for a job as research chemist in 1948.

She was fresh out of Oxford University, 23 years old, brimming with self-confidence, and absolutely full of opinions. She probably frightened the job interviewer half to death.

But she landed a job with a plastics company in Colchester in 1949. She joined the Conservative Party and stood for Parliament in the 1950 election (she was the youngest candidate yet), and married businessman Denis Thatcher in 1951. Margaret Thatcher, as she then became, finally made it into Parliament in the 1959 election.

She entered the Cabinet of Conservative Prime Minister Edward Heath in 1970 as the ''statutory female'' (as he gallantly put it). But she had the last laugh in 1975, replacing Mr Heath as party leader after the Conservatives lost the 1974 election. She took a very hard line from the start, both in domestic and in foreign politics. Her open hostility to the Soviet Union led a Soviet newspaper in 1976 to dub her the ''Iron Lady'', a title in which she revelled.

However, her real impact was in British domestic politics, where she broke the welfare-state consensus that had dominated all the major parties for the previous 30 years.

''It is our duty to look after ourselves,'' she said, and the political orthodoxy trembled before her onslaught.

An American diplomat in London, in a confidential assessment of the new Conservative leader in 1975, captured the essence of the then Mrs Thatcher's revolutionary politics. She was, he wrote, the ''genuine voice of a beleaguered bourgeoisie, anxious about its eroding economic power and determined to arrest society's seemingly inexorable trend towards collectivism.''

That was what carried her into office in the 1979 election, and as prime minister she acted on her convictions. After she had fought and won the Falklands War against long odds in 1982, her popularity was unassailable, and she used it to break the power of the trade unions and privatise state-owned industries. More than that, she made free-market ideology for all intents and purposes the state religion.

So it remained for 30 years, long after her harsh and confrontational style had lost her the support even of her own party. She was ousted as Conservative Party leader and prime minister by her own colleagues in 1990, but the Labour governments of 1997-2010 were also in thrall to her ideas. Their influence abroad, particularly in the United States, was equally great.

Yet, her greatest contribution to politics, and the foundation of the Right's political success over recent decades, was not ideological but tactical. She was the first politician to grasp the fact that with the decline of the old working class, it had become possible to win elections on a platform that simply ignored the wishes and needs of the poor. There were not as many of them as there used to be, and the poorest among them usually failed to vote at all.

This insight was key to the success of President Ronald Reagan in the United States in the 1980s, and to the triumph of conservative parties in many European countries in the same period. It continues to be a major factor in the calculations of parties both on the right and on the left down to the present day: you cannot count on the poor to win an election for you.

Margaret Thatcher was made a baroness after she relinquished her seat in the House of Commons in 1992, and continued to sit in the House of Lords until ill health forced her to withdraw from public life entirely in 2002. In her last years she suffered from dementia, and she finally succumbed to a stroke on Monday.

Her influence lives on, at least for the moment, but it may not last much longer. The powerful middle class on which she founded her political strategy has been hollowed out by the very success of the free-market policies she promoted. Once you allow for the effects of inflation, average middle-class income in the United States, for example, has not grown at all in the past three decades.

The time may be coming when gaining the votes of the poor, including the growing numbers of the ''new poor'', will once again be essential to win elections.