Israel may yet have final say on Iran deal 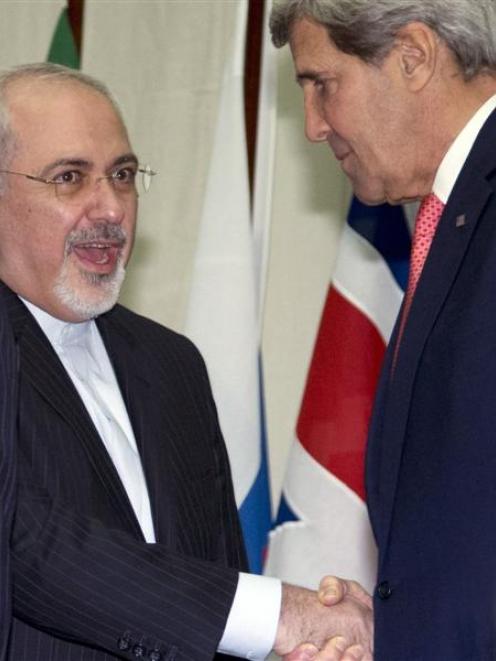 US Secretary of State John Kerry (right) with Iranian Foreign Minister Mohammad Javad Zarif at the United Nations Palais in Geneva on Sunday. Iran and six world powers reached a breakthrough deal early on Sunday to curb Teheran's nuclear programme in exchange for limited sanctions relief. Photo by Reuters.
''We are not blind, and I don't think we are stupid,'' US Secretary of State John Kerry said in response to fierce Israeli criticism after the first round of talks about Iran's nuclear programme earlier this month failed to reach a deal.

Now the deal is done, and Israeli Prime Minister Binyamin Netanyahu is even harsher in his condemnation of Kerry's handiwork.

''Israel has many friends and allies,'' Netanyahu said, ''but when they're mistaken, it's my duty to speak out ... . What was achieved last night in Geneva [November 24] is not a historic agreement, it was a historic mistake. Today the world has become a much more dangerous place because the most dangerous regime in the world took a significant step towards obtaining the world's most dangerous weapon.''

What he meant was that the interim agreement implicitly recognises Iran's right to enrich uranium for peaceful uses.

But that right is already enshrined in the Non-Proliferation Treaty, which Iran has signed, and nobody ever thought Iran was really going to renounce it.

What was at issue was whether it would enrich its uranium to ''weapons grade'' - 90% pure - and make nuclear bombs.

The ''Plan of Action'' signed by Iran, the United States, Russia, Britain, France, Germany and the European Union ensures it will not, at least for the next six months.

All uranium enrichment above 5% is to be halted, and Iran's entire stockpile of 20% enriched material - the potential feedstock for a ''dash'' to weapons-grade material - is to be diluted or converted to a form not suitable for further enrichment.

Iran is not to install any more centrifuges (the machines used to enrich material), and large numbers of the existing banks of centrifuges are to be left inoperable.

Even Iran's stockpile of 3.5% enriched uranium (for use in nuclear power reactors) is to remain the same between now and the end of the six-month period.

And there will be no further work done on the Arak reactor, which might give Iran plutonium, and thus a second route to a nuclear bomb.

All it gets in return is $US7 billion ($NZ8.5 billion) worth of relief, about $US100 per Iranian, on the sanctions that are crippling its economy.

All the main sanctions will stay in place until a final agreement has been signed - if it is - six months from now.

Iran can therefore make no further progress towards nuclear weapons while the detailed negotiations continue, if that is actually what Teheran ever had in mind.

Yet Israeli officials are talking as if the US has been both blind and stupid.

On Sunday, Israeli Intelligence Minister Yuval Steinitz said that ''Israel cannot participate in the international celebration, which is based on Iranian deception and the world's self-delusion''.

And Naftali Bennett, Israel's minister of trade and industry, warned: ''If in five years a nuclear suitcase explodes in New York or Madrid, it will be because of the agreement that was signed this morning.''

This is so far over the top you wonder whether the speakers even believe it themselves.

Israel has talked itself into this obsession with Iran's alleged nuclear weapons project - Israeli sources have been warning Iran is two years away from a bomb at regular intervals for the past 20 years - but the constant talk about it has also served to draw attention away from Israel's settlement policy in the Palestinian territories.

Israel's basic position is that the Iranian regime is entirely composed of evil terrorist fanatics who should never be allowed to have refined uranium of any sort.

The only recourse is therefore to tighten the sanctions more and more until Iran's entire economy and government crumble and a completely different sort of people emerge from somewhere to take over the country.

No deal can be a good deal.

Israel's leaders are dismayed they can no longer keep their allies and friends pinned in this extreme position, but endlessly quoting the ravings of former Iranian prime minister Mahmoud Ahmedinejad is not enough.

They would have to demonstrate Iran actually intends to attack Israel, and they cannot.

So eventually their allies just moved without them.

As Israel's Finance Minister Yair Lapid told Time magazine, ''We've lost the world's ear. We have six months, at the end of which we need to be in a situation in which the Americans listen to us the way they used to listen to us in the past.''

But the game is not over yet.

Israel's influence in the US Congress is still immense, and its Congressional allies are already talking about heaping more sanctions on Iran (in order to kill the deal, though they don't admit that).

President Obama could veto those new sanctions, of course, but he will find it a lot harder to get Congress to revoke the existing sanctions if the final deal is done six months from now.

That's why Iran gets so little relief from sanctions now in return for its concessions: Obama needs more time to work on Congress.

But Israel may still win this tug-of-war.