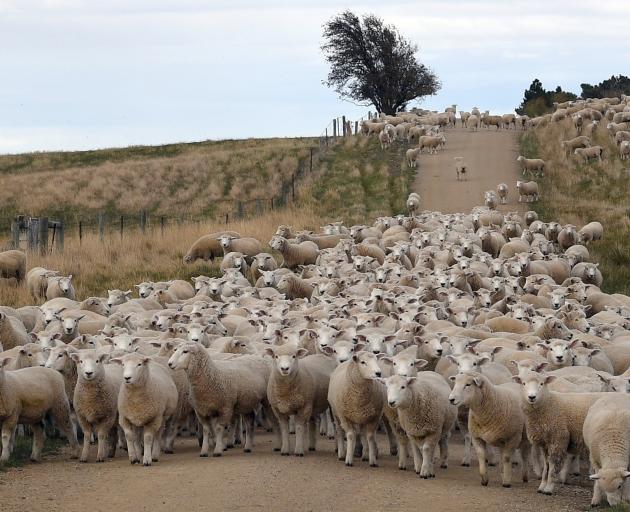 Despite a tough few decades, the sheep industry has continued to innovate. PHOTO: STEPHEN JAQUIERY
In 1881, the first frozen shipment of red meat left New Zealand for the United Kingdom.

It’s hard to imagine the planning and risks involved in that shipment.

The Government’s New Zealand History website describes how the voyage was organised by William Davidson, who was the British-based manager of the New Zealand and Australian Land Company. The company sent Thomas Brydone to Britain to study refrigeration technology; he was then responsible for handling the ‘‘experiment’’ in New Zealand.

The passenger sailing ship Dunedin had a complete fit-out with a coal-powered Bell Coleman freezing plant. The first 5000 carcasses originated from the Totara Estate in Oamaru, where they were cooled and sent by rail to Port Chalmers, then frozen aboard Dunedin. When the shipment reached the tropics, the crew on board noticed the air wasn’t circulating properly, so Captain John Whitson crawled aboard to saw extra holes for air circulation, nearly freezing himself in the process.

When Dunedin arrived in London, in late May, only one carcass had to be condemned and the cargo’s superiority over Australian shipments was remarked on.

This innovative operation marked a transformation of New Zealand’s economy and we lived ‘‘off the sheep’s back’’ for many years. To a certain extent we still do — 140 years later and red meat is still a significant earner for the country. However, the past few decades have been challenging, with the conversion of easier country to dairy farming. Despite this, the industry has continued to innovate, breeding sheep better suited for tougher country, maintaining lamb numbers with reduced ewe numbers and improving products and connectivity with consumers.

The latest export statistics, from Beef + Lamb New Zealand, demonstrate the significant change in export markets for lamb — 100 years ago, 80% went to feed the Brits; last year less than 40,000tonnes of lamb went to Great Britain, while nearly 140,000tonnes went to China.

During the Global Financial Crisis, when our exports were not wanted in other parts of the world, China stepped in and bought what we had. China is the reason New Zealand’s red meat industry is still prosperous.

There are two sides to the China coin — such exposure to one market creates vulnerability and when 50% of New Zealand’s lamb exports go to China, as they did last year, we should be asking questions of our meat companies. We only need to look over the Ditch to see the tariffs and blockages applied to Australia’s agricultural exports (particularly, red meat, wine and barley) when the Australian Government criticised China. That should have sent shivers down the spines of even the bravest New Zealand red meat companies.

In parallel, as outlined in the Otago Daily Times (September 27), carbon farming is rapidly expanding into hill country, largely replacing sheep and beef farms. Carbon farmers are paid $60 per tonne for carbon and can earn up to $2000/ha for not doing anything beyond planting the trees. On top of that, the relative ease of international ownership of land for carbon farming means that after 140 years of exports, sheep and beef farming is facing the fight of its life.

Does New Zealand still want a viable sheep and beef industry? If we do, then we should act soon. Continued decreases in lamb numbers will see rationalisation of meat companies, job losses and rural communities in crisis.

What does the sheep and beef industry still have to offer us and why should we fight for its survival?

We produce the lowest carbon, highest quality red meat products in the world, which are nutritionally superior. On top of that, natural fibre is making a comeback and wool should be part of a long-term export equation. Sheep and beef farming can integrate well with carbon farming and well thought-out, planned land-use, instead of blanket radiata planting, is optimal for the climate and for our communities.

Carbon farming will make some people very wealthy and will be a short-term fix for greenhouse gas reduction. Global demand for non-processed, high-quality nutritious food will not diminish. We need to invest in lifting the value of our red meat and wool products internationally and invest in development of greater diversity in our export markets. A long-term plan for integrated, multiple land-use farming systems is needed nationally before we lose vast tracts of land for short-term gain and to international ownership.

Leadership is needed, and fast — just as we saw in Oamaru 140 years ago.

Yes leadership is needed but on a global scale. Global food production generate greenhouse gas emissions to the tune of more than 17 billion metric tons per year. Animal-based foods account for 57 percent of those emissions, and plant-based ones make up 29 percent. Just five of the largest meat and milk producers generate the same volume of greenhouse gases as Exxon, one of the world’s largest oil and gas companies.
Land use is also a problem a report found that three-quarters of agricultural land around the world is used to raise animals or grow the crops that feed them. And the overuse of antibiotics in the animal food system is causing microbial resistance.
Children born today face a ghastly future if we continue to pollute this world. Our food systems must change to mitigate future disasters. Overall, governments aren’t doing enough to curb the problem, a report suggests. “Despite the global impact of meat, no country in the world has a strategy to reduce consumption or transform production,” it reads.

The first page of the Paris Agreement on Climate Change states:-
"Recognizing the fundamental priority of safeguarding food security and
ending hunger, and the particular vulnerabilities of food production systems to the
adverse impacts of climate change,"

Allowing carbon farming to decimate food production is in contravention of the agreement.
The global population has an additional 2 billion people locked in over the next 30 years due to increased life expectancy in countries that have recently developed modern economies.
Locking up developed farmland for carbon farming is a crime against humanity !!!