Literary flagstones well worth looking down on 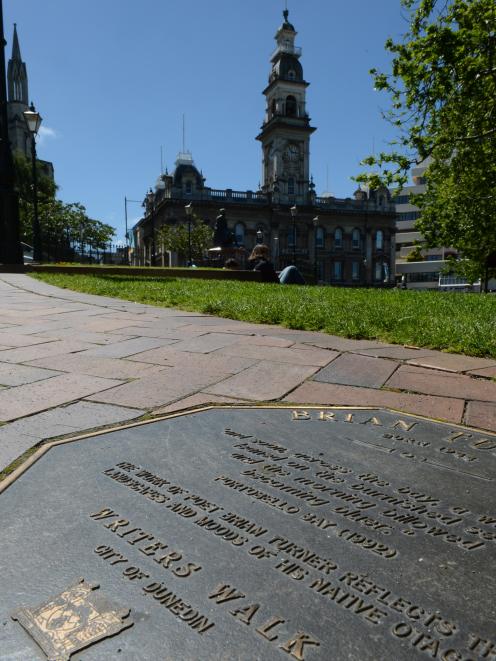 As a tribute to some of the country's most notable writers, 24 bronze plaques grace Dunedin's upper Octagon. Photo: ODT files.
The Dunedin Writers’ Walk has maintained a low profile for the past 25 years but  Tony Eyre argues it is worth more than a passing glance.

Scottish poet Robert Burns, cast in bronze, is an imposing presence in the upper Octagon and at his feet, spread out in semicircular fashion, are 24 bronze plaques of the Dunedin Writers' Walk, dedicated to some of the country's notable writers with connections to the city.

Your average passer-by doesn't seem to pause too long to muse over the many light-hearted quips and observations that these writers share about Dunedin. That's probably not surprising, because the Writers' Walk has literally lain low for the past 25 years without too much highbrow fanfare.

The first 11 plaques were unveiled in 1993. The idea for a Writers' Walk came from Dunedin writer Lynley Hood and she and playwright Roger Hall took the proposal to mayor Richard Walls and city council chief executive Murray Douglas.

In compiling a shortlist of eligible writers for the inaugural plaques, priority was given to the most entertaining and insightful quotations about Dunedin. So any well-known writer with strong links to Dunedin didn't make the cut in that initial plaque selection if their published work was devoid of positive observations about their time spent in the city.

I don't know if it's just a peculiar habit of Dunedin citizens, but we do like to know what visitors think of us, hoping for glowing praise of our place, our people - and our climate.

In its 25 years of gracing the upper Octagon, the Writers' Walk has fulfilled that function, honouring those of our distinguished writers who have flattered us in return.

When I'm not rushing to a movie or a performance at the Regent Theatre, I do like to make the time to revisit the plaques, self-consciously dawdling around the half-circle of the Writers' Walk as if I'm looking for discarded cigarette butts or a dropped coin or two.

There are two plaques I particularly enjoy for their wry humour. Author and editor Dennis McEldowney described Dunedin as ''a place where it is front-page headline news if someone has a fire in their wardrobe'' and playwright Roger Hall quips that ''it rains in the summer only when a national sporting event held in the city is being televised live''.

Not surprisingly, our weather is a common theme with other writers. Publisher A. H. Reed dismissed the belief that Otago was bleak and cold as an ''amusing mistaken notion'' and Witi Ihimaera somehow survived the censor's cut with ''smiles shiver and snap in the cold''.

On the other hand, Robyn Hyde was gladly welcomed into the Writers' Walk because ''the echo of morning chimes, like lazy bees in a stone foxglove'', gave the impression of Dunedin as a city of warmth and sunshine.

The beauty of Dunedin's landscape draws poetic response from a few of the enshrined writers like Charles Brasch, Denis Glover and Brian Turner. And Dan Davin, on a return visit in 1948 to ''the blue of the hills and the Scotch mist'' nostalgically regrets ''not having come here sooner and stayed longer''.

Children's writer Joan De Hamel has a time capsule buried under her plaque, an implied reference to her first book, X Marks the Spot. Dunedin's most famous writer, Janet Frame, has two plaques; the second, viewed as an extension of the Writers' Walk, lies in front of the steps of the Railway Station and bears a quote from her autobiography An Angel At My Table.

What is the future of the Writer's Walk?

I'm not aware of any formal discussion around this question but the city council's imminent launch of the 10-year plan involving the central city upgrade project (including the Octagon) will require careful consideration as to how these literary flagstones will continue to be accommodated.

There is no shortage of writers deserving to be recognised in the walk - Essie Summers and O. E. (Ted) Middleton are two that have been touted for some time. But there are other creative ways our writers can be celebrated in this Unesco City of Literature and a Recognition of Writers working group has been busy exploring options.

In the 25 years since its creation, the Dunedin Writers' Walk, distinguished by the patina of time, is an unassuming grande dame worthy of more than a passing glance.

And don't be shy - an invitation beckons from poet Lauris Edmond who said at the time of the initial launch that she ''was frightfully pleased to be walked on and walked past in the Octagon''.

-Tony Eyre is a Dunedin writer