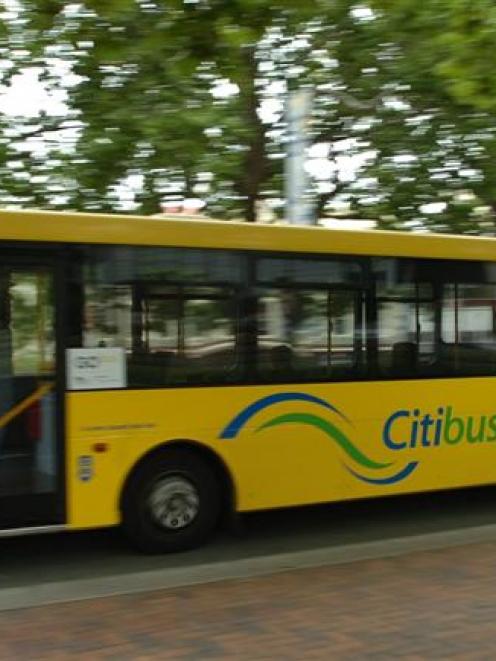 A Citibus drives through the Octagon. Photo from ODT files.
Bus fares have risen by 56% in the past 12 months and new routes have been introduced.

But has there been any strategic long-term planning behind the moves? Phillip Cole has his doubts.

Lost in all the recent news about ever-increasing stadium costs and the latest expensive location for the glass box addition to the Town Hall was the sound of the death knell for the Dunedin public transport system.

The fare increases on July 1 represent a staggering 56% cumulative increase over the past 12 months in bus-fare prices in Dunedin.

With the effects of the recession being felt across the city, this must be right up there in the not-so-bright ideas department - and that is being polite.

This, however, is just one of several reasons that add up to the terminal decline of the public transport system - let's just call it buses, as there are certainly no other services being run - in Dunedin.

The recent introduction of the new central parking fees (oddly enough at the same time as the bus-fare increases) may have been sold as a way of encouraging people to use the buses to travel into town but obviously someone forgot to tell the two bus companies, especially Citibus which runs most of the bus routes and is part of Dunedin City Holdings Limited (council-owned).

The more cynical among us would, of course, see this as the perfect revenue-raising exercise.

The two bus companies have stated that fares needed to rise to provide improvements to the fleet, among other reasons.

While there is no dispute that the diesel-belching, inefficient monstrosities need replacing, no thought has been given to replacing them with anything other than same-size buses.

They are also saying that when fares increase, patronage increases - and here, perhaps, lies the root to the problem of why Dunedin has such a poor-quality bus service.

With business acumen like this, the bus service is heading down a one-way street to oblivion.

The fundamental problem with the Dunedin bus service is that the whole network needs to be reviewed and a new strategy determined.

The lack of foresight in planning for a revamped bus service is no better illustrated than by the non-provision of smaller 20-seater type buses for non-peak travel.

How often do we see almost-empty 50-plus-seat buses plying the routes between 9.30am and 4pm every weekday?This is both unsustainable and uneconomical.

The size of buses alone, however, will not solve the gross under-usage of the bus system.

The bus timetables themselves need to be ripped up and new ones produced offering three basic requirements.

• No person living more than 400m from a bus stop.

• Buses that run later at night and earlier in the morning for the shift workers and staff at the hospitals and other core institutions.

These basic requirements, together with a mixed fleet of 50- and 20-seater buses offering comfortable travel, will be a welcome start to trying to attract people into using public transport once more.

But this alone will not be enough.

People will not use public transport if it is not cheaper, and more convenient, than using their own vehicle.

Even with the new parking fees, people still bring their cars into town and spend time driving around looking for a parking spot rather than risk catching a bus that does not keep to a timetable and is poorly timed for the user's convenience.

They just park further away, outside the charge zone.

The bus companies need to invite the public to use their service and not look on their passengers as cash-fodder.

If no-one at council level can grasp the fact that a well-used public transport system can be a catalyst for a regeneration of Dunedin, then they should look elsewhere to people who can see and realise the potential of what an integrated and user-friendly public transport service can bring to Dunedin.

Or, at the very least, consult the people who actually use the bus service.

Near to where I live, a new service has been introduced to replace an existing one that ran nearby.

However, the new route now goes past a kindergarten which is busy during morning, lunchtime and early evening with children crossing the road.

No signs or markings have been installed to indicate the bus drivers need to slow down, and no kerb protrusions constructed to make crossing the road easier.

Perhaps the extensive surveys the bus company carried out before the route was commissioned showed that the route would not be well patronised and would be withdrawn at a later date, therefore negating the need for signs and markings - or perhaps no survey was carried out and no thought went into it at all.

A fraction of the amount being spent on the stadium would provide a first-class public transport service for Dunedin - perhaps the money put aside by the ORC for the glass roof could be used for public transport?

In a short time, the rate of return would be infinitely more than the stadium will produce.

For all those nay-sayers out there who doubt public transport can ever run at a profit, look no further than Curitiba in Brazil, supposedly a third-world country but with a first-world public transport system.

As in Dunedin, the infrastructure is publicly owned (by council) and the buses are run by private companies, but the system returns a profit every year which is reinvested in public transport.

This is done not on the number of passengers they carry but on the kilometres of route they cover.

It doesn't have to be about "bums on seats": it is about providing a public transport service that the customer will return to and use repeatedly.

If you give the public a service or product that they can see is reliable, value-for-money and an asset, they will support it in their droves.

But treat them like imbeciles and the bus companies will get what they deserve.

- Phillip Cole is co-chairman of Sustainable Dunedin City and is a transportation engineer and ex-bus user of the Dunedin public transport system who walks to and from work.