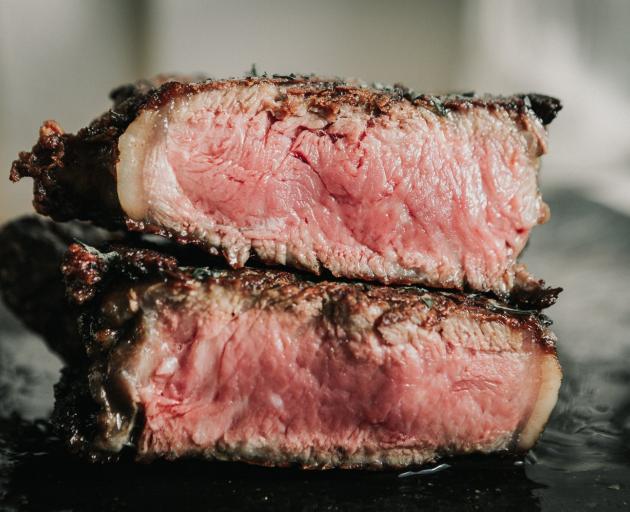 When we do eat meat, we will want that meat to be the very best. PHOTO: GETTY IMAGES
"Peak oil" is a term we have become familiar with. Now there is a term “peak meat”, and a report from Boston Consulting Group (BCG) predicts Europe and North America will reach peak meat as soon as 2025, depending on a few “dominoes” and their impact.

These dominoes include public concern for climate change (that domino is well on its way); refinement of test and texture — happening fast but in my view, the climate domino will change people’s tastes to the point we will adapt to new tastes and textures; and a third domino being government regulation, for example, what happens if China regulates meat consumption per person?

The report predicts that nine out of 10 of the world’s most popular dishes, like spaghetti bolognese and dim sims, will have regularly used meat replacements by 2035.

New Zealand has a proud reputation for high quality food production and exports. We could see “peak meat” as a threat, we could also see it as an opportunity — but for that opportunity to fly, what will it take?

At an agricultural level, it is hard to see us competing on production on many of the base ingredients as we do in the meat and dairy industries. The bulk ingredients of many of the plant-based alternatives are crops such as soya bean, yellow peas, chickpeas or mung beans.

Commodity production via farming has been our most successful export model as regards food production. However, the cost of our good-quality, flat-land suitable for cropping make the required returns challenging to meet. There will be niche ingredients where we might compete, for example quinoa, buckwheat or organic production of the mainstay crops.

This pushes us further up the value chain and would force us to compete on brand and potentially manufacturing, leveraging the made in New Zealand (from ingredients sourced in New Zealand and from other markets) and ethical business advantage. This is where products such as infant formula have had such success. There is a lot more to producing infant formula than meets the eye. Products are sourced from all over the world and added to milk powder, which is produced from New Zealand’s liquid milk supplies.

One of the challenges for us has always been our distance from market. Historically, this has meant we have operated with a product-push mentality.

A brand and manufacture mentality will require a much greater connection with consumers and the markets we are selling into. Social media has made this possible in a way that was not possible when our meat and milk manufacturing companies were established — make way for the digital natives here.

Another area where we can compete is in innovation around ingredients used to make the alternative protein products.

An example cited in the BCG report is replacing an ingredient like methylcellulose, which is a chemical used as a binding agent, with a naturally derived product with the same function. I absolutely believe this type of innovation is part of our No8 wire mentality — but please universities, start training more food technologists, instead of lawyers!

Where does this leave our traditional meat and dairy companies? Well, they can join the club. Tyson Foods and Cargill, two of the largest meat companies in the world, are investing in alternative protein, seeing themselves in the “protein game”, rather than the “meat game”.

Nor should we panic. Peak meat in the US and Europe does not mean we are close to reaching such a state in Asia.

Experts I have spoken with believe that we are more than a decade away from peak meat in Asian markets, although it’s worth noting, China are starting to “push go” on their own alternative protein manufacturing.

And of course, as the world moves towards flexitarian diets, when we do eat meat, we will want that meat to be the very best — and where better to source that from than New Zealand?

Alternative protein is not an either/or scenario. It’s an area where we can play and compete alongside the very best.

It’s time to join the party.

Much of our sheep, cattle and deer are also our natural lawn mowers. Farms would have to be reverted back into bush that are too steep for cropping.

Nobody has suggested an end to grazing.

"The benefits of alternative proteins are clear—tasty, nutritious and healthy food, lower carbon emissions, and fewer concerns about the ethics and environmental consequences of intensive animal farming."