Not Brian's destiny to be humble, meek 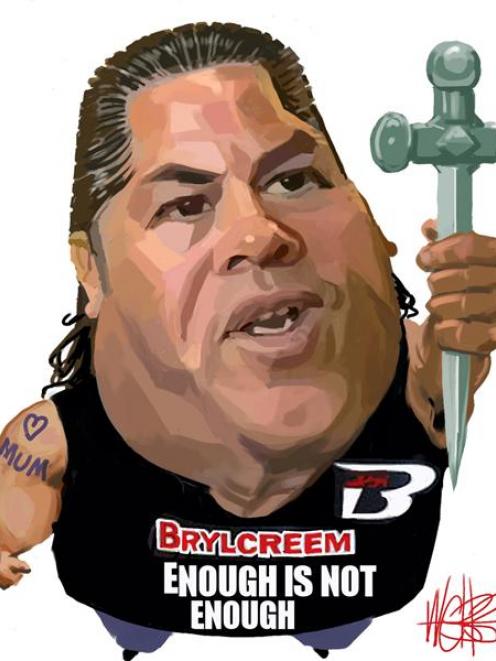 Brian Tamaki.
"Bishop" Brian Tamaki of the Destiny Church has provided his followers with a spiritual instruction manual involving oaths of loyalty and obedience. In elevating the messenger above the message, the church has begun to transform itself into a cult, argues Garth George.

At a special service during the church's annual conference in Auckland last weekend, about 700 male members of the church swore a "covenant oath" of loyalty and obedience to Mr Tamaki and were given a "covenant ring" to wear on their right hands.

The document, entitled "Protocols and Requirements Between Spiritual Father & His Spiritual Sons", contains the text of the "covenant oath", the guts of which is that "Above all, we stand here today in the presence of God to enter into this sacred covenant with our man of God, Bishop Brian Tamaki".

It says: "To you Bishop we pledge our allegiance, our faithfulness and loyalty. We pledge to serve the cause that is in your heart and to finish that work. Success to you and success to those who help you, for God is with you."

In its introduction, the church document says that proof of a man's covenant with God is how they "submit to God's chosen man ..."

The requirements of sonship, the document says, are to give Mr Tamaki obedience and honour, to imitate him and follow his faith and to give him "your loyalty and your strength".

Under "Public Conduct," the sons will in all conversation always speak of Mr Tamaki in a favourable and positive light; and in formal and/or public occasions, they will always address him and his wife, Hannah, first in acknowledgments and addresses at meetings "as a sign of respect to the father of the movement".

Under "Conduct Towards Bishop", the "sons" are told that "Bishop is the tangible expression of God", so they need to understand how to properly approach their man of God "to protect the anointing and not transgress this special relationship".

They are always to be respectful and honourable in Mr Tamaki's presence.

"Even though he is very sociable and open remember who he is!" They must never be "in his face" and must protect him from outsiders who attempt to do that.

Under "Discernment", the "sons" are told they must "feel Bishop's flow and be attentive to his thoughts and directions", which "gives unity and power to what God is saying and doing through him".

The "sons" must never openly disagree with Mr Tamaki in front of others and must "be careful not to become familiar (which can lead to contempt)" with him "due to his friendliness and openness".

Under "Etiquette", the "sons" are told that when Mr Tamaki and his wife enter a room, they must stand and acknowledge their presence.

They may sit only after the Tamakis are seated.

And if they dine with him they wait until he has started eating before they start eating, unless he indicates otherwise.

Under "Church Service (in house) Protocols" the men are encouraged to sit as close as possible to the front of the church to be nearer to Mr Tamaki and to be vocal during his preaching, affirming what he has to say with "amen" and "that's right", clapping, shouting and laughing.

This sort of participation is said to build "an atmosphere that is conducive to supernatural events".

They should come to church anticipating that God will speak through Mr Tamaki and should always be dressed well at all meetings with him.

They should also look happy and smile and be friendly to all and encourage people.

They must never tolerate anyone (regardless of who they are) speaking or talking critically of Mr Tamaki and his wife/family or the church.

"You will hear all sorts of statements and opinions but you must be prepared to ignore them and consistently hold him in the same high regard no matter what you hear."

In requiring its men to swear an oath of loyalty and obedience to Brian Tamaki, Destiny Church - having glorified the messenger above the message - has begun to transform itself into a cult.

The Concise Oxford Dictionary defines a cult as "a system of religious devotion directed towards a particular figure or object" and "a relatively small religious group regarded by others as strange or as imposing excessive control over members".

Mr Tamaki's self-glorifying rule-making, in which he has obviously been aided and abetted by other Destiny leaders, makes, for instance, Catholics' deference to, and reverence for, their spiritual father, the Pope, look positively casual.

But what bothers me mostly about all this is that those who prepared and published the document "Protocols and Requirements Between Spiritual Father & His Spiritual Sons" actually believe what they wrote.

And how 700 Kiwi men could accept this nonsense and swear lifetime fealty to a mere fallible mortal is quite beyond me.

It reeks, if not of spiritual blackmail, then of a deep spiritual sickness.

Things like honour, loyalty and obedience have to be earned and freely given, not appropriated and imposed, and when they are imposed, particularly under oath, they are fragile indeed.

Another enigma in this business is that no mention is anywhere made of the women of the church, apart, of course, from Mr Tamaki's wife, known as Pastor Hannah.

I presume that Mr Tamaki and his church leaders take literally the three-verse passage in Paul's letter to the Ephesians which says: "Wives, submit to your own husbands, as to the Lord."

That brief passage of scripture has, of course, been used by churchmen to keep women in their place ever since the apostles were cold in their graves.

But, as has been rightly said, a text taken out of context is a pretext.

Such religious totalitarianism is not new.

There are many churches in the United States, and quite a few in New Zealand, particularly in Auckland, led by despotic pastors who operate in similar dictatorial fashion.

Most are not nearly so blatant.

American evangelist Paul Mershon puts it better than I could: "The abuse and misuse of pastoral authority in the case of those requiring an oath of loyalty to any degree is wholly without merit, and beyond the scope of any and all scriptural mandate ...

"Certainly we all want to, and should, support our pastor, but in no way does this imply that we are to blindly follow any man with unquestioned loyalty when it is Christ, and Christ alone, to whom total fealty belongs ...

"[A pastor's] role is that of a humble servant of the Lord, ordained of God to serve his people as a sheep-feeding pastor, not a heavy-handed despot."

No leader has the best interests of those he leads at heart who manipulates them into signing, or giving verbal affirmation to, some sort of "covenant" whereby they pledge to be loyal only to that leader all the days of their lives, and follow him no matter what, Mr Mershon says.

History is littered with evidence of the tragic results that can come to people bound up in religious cultism.

To Destiny Church members I simply say: Get out while you can.

Garth George is a retired editor. He lives in Rotorua.