Not sport but sadism - and illegal 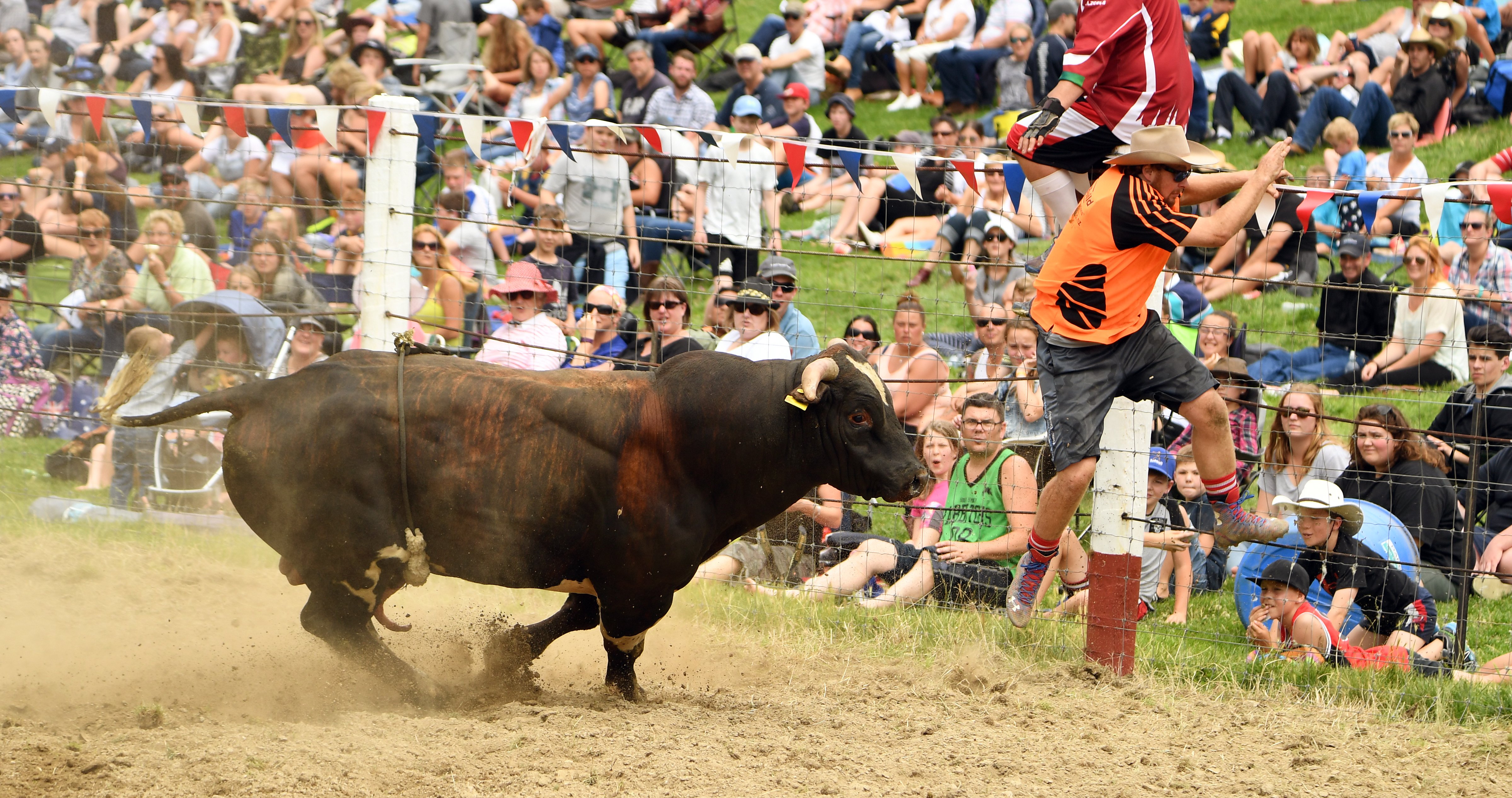 Tables turned? Cowboy Will Jamison runs away from a bull at the Outram rodeo in 2017. PHOTO: STEPHEN JAQUIERY

Lynn Charlton, of Auckland, the spokeswoman for Anti Rodeo Action NZ, says New Zealand rodeo has revealed itself to be a cult of secrets, lies and cover-up.

Threats of trespass followed, then threats of violence, and actual violence.

High-definition cameras were not permitted. As one person tried to grab the camera from an advocate, she admitted that HD cameras ''Can zoom in - too far''. When asked what would be seen, she said, ''Animals - the whole event.''

Filming was allowed on phones only - but not calf roping.

Rodeos are illegal, according to a 2018 report released by the New Zealand Animal Law Association. Author and barrister Catriona MacLennan said rodeos could not continue in breach of the law.

A menacing mob quickly surrounded advocates, grabbing and knocking cameras and physically assaulting them. Threats of violence were made.

One woman said her children had told her to punch the advocates in the face and if it wasn't a public place, she would have done so.

A club member shouted, ''Break! Break!'' across the arena, making a chopping motion with her arm as she tried to shut down the rodeo. The rodeo was shut down briefly. The announcer called for cowboys to assist.

And ''cowboys'' came, using similar tactics they use against animals - surrounding, herding, dominating, pushing, shoving, making it clear violence would increase if they didn't co-operate.

One of our team called the police as they left. Some were pushed in the back. Smartphones had been knocked out of their hands and one was stolen. The police retrieved this with all of the images deleted.

Once outside, the advocates joined a protest group on the grass verge. The ''cowboys'' continued the harassment, referring to them as ''faggots'' and trying to incite further conflict.

There are those who have been trying to justify this mob violence. Nothing justifies violence.

That rodeos are cult-like is clear. That they wish to cover up assaults on animals - deemed ''sport'' - is also clear. They do not want wider New Zealand witnessing these scenes.

A few days earlier, a tip-off had been received about the death of a second animal, a horse, at the Gisborne Rodeo in December.

An advocate had filmed a bull dislocate its leg while bucking and the bull had been shot - twice.

The rodeo association president had been interviewed by numerous media about this but omitted to say there had been a second death. The tip-off opened that up.

When I spoke with the rodeo president, he claimed that the horse's death was not connected to rodeo as it happened out the back, as if what happens out the back has no connection to what happens in the arena.

Since then, it has emerged that the horse had exited the arena - i.e. had been subjected to the usual cruelty immediately before its death from slamming into a pole.

Animals are driven berserk with pain and fear in the arena. Riders spur horses in the shoulders and flanks while subjecting them to a flank strap. The more spurring, the more points awarded. The more berserk the animal, the more points awarded. This causes some, off their heads and bucking blind, to slam into arena fencing. The death of this horse, denied as a rodeo-induced death, and covered up, is indeed another rodeo death.

It is claimed these deaths are rare, freak accidents, but this was the third known death in the first eight weeks of the season, when only a few rodeos occurred, and the fourth known death in 2018. Two were freak deaths in a few hours. And the death count is not the only point.

Driving animals berserk is cruel. No other animal-related event deliberately incites berserk behaviour through pain and fear. This is sadism, not sport.

Rodeo clubs are a cult, like any other cult. Scrutiny from outsiders is not welcome. Previous assaults occurred at Waikato rodeo and a Paeroa bull ride, showing clubs want to hide how they treat animals.

Newly imposed ''accreditation'' for rodeo-approved photographers who omit the kinds of scenes advocates show tells the public everything.

One rodeo photographer offered to delete anything that could be harmful to the image of New Zealand rodeo.

Looking through rodeo-promoted photographs you won't see calves flying backwards or sideways at the end of a rope, or how they land on their backs with their mouths open in horror.

You won't see bulls with their mouths open and tongues hanging out or the saliva many of them pour while their eyes roll.

You won't see horses with their mouths open, tongues visible, with their necks extended downwards, or the steers that collapse after their back legs have been roped and pulled in one direction while their heads have been pulled in another.

No more excuses. Our Government is failing to uphold the rule of law and stop rodeos. A ban is not needed - you can't ban what is already illegal. The Government merely needs to uphold the law.

Our Prime Minister has been securing trade with the UK. It is a matter of urgency that rodeo is stopped. The farmers involved must stop brutalising animals, and farmers against rodeo must take a stand and call upon the government to take immediate action.

What will our UK partners, who banned rodeo as is conducted here, in 1934, think of our animal welfare once they know about this? Images of rodeo are not used to promote our animal welfare standards. We all need to think about what that means, especially our Prime Minister.

[The New Zealand Rodeo Cowboys Association (NZRCA) condemned the treatment of protesters at the Mid Northern Rodeo, saying it did not align with the values of rodeo.]

Rodeo has had its day. Time to let it go.