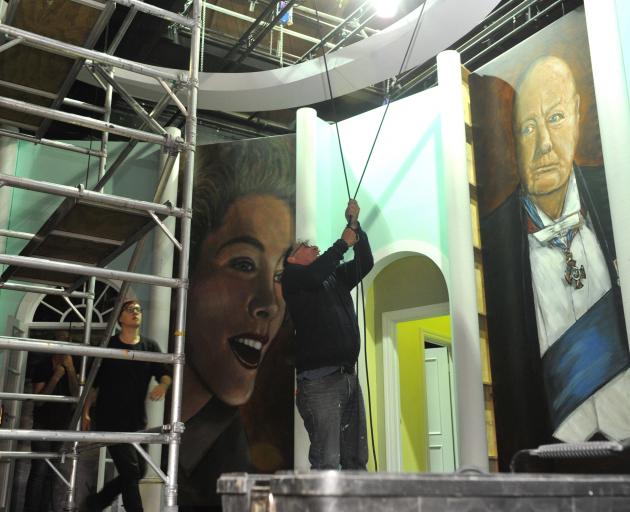 Once a production is created, a professional theatre company will always find a place in which to perform it. PHOTO: ODT FILES
Should the Dunedin City Council  be doing more to support the city’s theatre industry, ask theatre professionals.

We feel obliged to enter this discussion because for each of us theatre has been an important part of our life and livelihood, having been employed as theatre practitioners in Dunedin for decades.

We grew up through the many local companies or their equivalents elsewhere, both amateur and professional; a distinction which often has little to do with quality but rather differentiates between those for whom theatre is recreational and those for whom it is a career. We are supportive of any proposal that allows these important amateur theatres to flourish. They helped us. They are where most of us got our start and where many of us still find enjoyment. They deserve the support necessary to allow them to continue and thrive.

Since the demise of the Fortune four years ago, many local drama groups have created and performed interesting and valuable work. You don’t always know about these productions as they have to keep costs down and so advertise on the web or by using an email list that targets their particular market.

The judges at the most recent Dunedin Theatre Awards indicated how amazed they were at the diversity of work on offer even in the days of Covid. Theatre in Dunedin is not moribund — it’s very much alive in different forms. What’s lacking is what is traditionally called a "professional theatre company".

If the city wants a fully professional theatre company presenting a series of high-standard productions throughout the year, it needs to look beyond bricks and mortar and engage in some different thinking. Consideration needs to be given to seeding such a company’s creation. Rather than spending all of its available funds on buildings, would it not be better for the Dunedin City Council to support a dollar-for-dollar donation scheme that would allow a fund to be created that would launch such a professional venture?

Maybe theatre in Dunedin needs a theatre co-ordinator to help support such an entity into existence similar to the one created by the DCC to support the film industry and the City of Literature. Perhaps a curated series of plays would be a good place to start drawing on the expertise in the companies that already exist, while placing them under a theatrical brand and direction that underwrites their quality.

For a small fraction of the budgets being considered for bricks and mortar theatre buildings we could have a burgeoning theatre industry. Yes theatrical productions need a venue in which to perform, but if all the available funding is used to provide venues, where will the theatrical productions the venues were built for come from?

We think that our councillors need to seriously consider that question because compelling theatre isn’t created by the availability of bricks and mortar, it’s created by creative grunt, dedication, passion, technical expertise, vision, and sweat and tears. Once a production is created, a professional theatre company will always find a place in which to perform it; a theatre building can only sit there waiting for that to happen.

Why is all this important? We’re a City of Literature. We have a responsibility to support the arts because, as historian Michael King wrote, we need to: "... listen to our own voices and trace our own footsteps; we must have our own heroes and heroines to inspire us, our own epics to both uplift and caution us; we must persist in building our own culture with our own ingredients to hand... ".

Bricks and mortar alone will not do that.