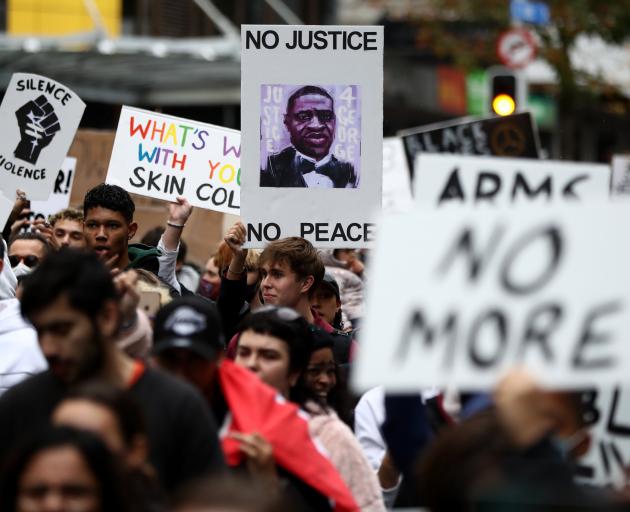 Protesters march down Auckland’s Queen St on Sunday in solidarity with protests across the United States following the killing of an unarmed black man, George Floyd, at the hands of a police officer. PHOTO: GETTY IMAGES
Over the last few days, thousands of protesters in New Zealand have joined the multitudes in America demonstrating against the death of Minneapolis man George Floyd by a white police officer.

An estimated 4000 people gathered in Aotea Square to attend the Black Lives Matter March for Solidarity, while other demonstrations took place in Wellington, Christchurch, and my home town of Dunedin.

For all New Zealand’s international reputation as a clean and green paradise governed by our relentlessly kind and positive Prime Minister, police brutality and structural racism is still a horrifying reality, especially for our Maori and Pasifika citizens.

We are not immune to the disproportionate effect of armed policing on indigenous communities and people of colour. And yet there is a push within New Zealand for more police to carry deadly weapons.

Our police officers are not routinely armed. However following the Christchurch mosque shootings in March 2019, police conducted the Armed Response Teams (ART) trial, wherein some officers were given guns in order to respond swiftly to similar terrorist attacks.

This trial focused on Canterbury, Waikato and Counties Manukau, and ended in April. A review is currently being conducted. According to police, no shots were fired by the particular trial officers, although within the trial period, three people of Maori and Pasifika descent were shot dead by police. The fact remains: police disproportionately use force — often with lethal consequences — against Maori and Pasifika people.

A stash of documents released under the Official Information Act has revealed a number of flaws with this trial. Michael Neilsen, writing for The New Zealand Herald, notes the New Zealand police were warned before and during the trial about the ‘‘severe’’ consequences of not having consulted with Maori. This lack of consultation was further compounded by an insufficient period of time to ‘‘establish a thorough baseline on current armed response operations and [Armed Offender Squad] deployments’’, according to the report. This lack of foresight means a thorough analysis of the trial’s efficacy will be impossible.

Between 2009 and 2019, two thirds of all those shot by New Zealand police were Maori or Pasifika. According to JustSpeak, a movement of young people dedicated to speaking out on criminal injustice, and cited in Laura O’Connell Rapira’s piece for The Spinoff, police are 1.8 times more likely to take legal action against Maori than Pakeha, and seven times more likely to charge a Maori person with a crime, even when that person has no police or corrections record. And yet there was no community consultation prior to the ART trial, despite the trials being conducted in areas with a disproportionate number of Maori citizens.

A survey by Action Station of 1155 Maori and Pasifika people found 85% did not support the ART trial. Of those surveyed, 87% said knowing police were armed in their communities made them feel less safe. Action Station also notes that a study from Princeton University (published in August 2018 by Jonathan Mummolo) showed that Armed Response Teams were most often used in non-emergency situations, such as for search warrants.

These teams did nothing to improve community or officer safety and were most often deployed against people of colour. According to the study author, ‘‘The routine use of militarised police tactics by local agencies threatens to further the historic tensions between marginalised groups and the state with no detectable public safety benefit.’’

The introduction of more guns in New Zealand will only further erode trust between police and the public. The more oppressive policing becomes, the greater the likelihood of violence from both sides.

Arming a greater proportion of our officers is a provocative and unnecessary act, not to mention a costly endeavour. Additionally, it is wrong to expect the average police officer to wield a gun.

Not every member of the police is physically or psychologically capable of handling and discharging a firearm.

Instead, police officers should receive more conflict management training, and ought to be highly proficient in the use of self-defence techniques and non-lethal measures of disarming someone. New Zealand should not follow the US’ lead in becoming a country where police officers shoot first and ask questions later.

Arms Down NZ is a brilliant protest group raising concerns about the excessive and disproportionate impact of armed policing on our Maori and Pacific communities. Their website features a variety of stories about Kiwis’ experiences with police. I was heartened to see the hashtag #ArmsDownNZ trending on Twitter. This is an important and ongoing conversation.

I encourage readers to contact police and your political representatives to inform them of your concern surrounding the armed police patrols. Do not be afraid to discuss the issue with your friends and whanau, and share your thoughts online. Together we can make a change. More guns on our streets will not protect our communities. As Green Party MP Golriz Ghahraman says: ‘‘The disease of state-based discrimination is not constrained to American borders. We must acknowledge that here in New Zealand, at every single step of the justice system, Maori face increased discrimination.’’

■Jean Balchin, a former English student at the University of Otago, is studying at Oxford University after being awarded a Rhodes Scholarship.

How many NZers protested, thousands? More to the point, how many protested in America, 20,000, 100,000? Last time I checked America had over 320 million--the worlds's third largest population.
What about all the millions who did not protest---why didn't they protest? Floyd was murdered, yes, but......

Do you plan to finish the sentence? He was murdered, but What?

The police also charge a lot more men compared to women. Applying the same sort of logic implies structural sexism in the police force against men.

It implies that there are more male criminals than female.

It would help if you actually looked at the stats concerning the number of people killed by police. More white people were killed than any other group.The police fatally shot nine unarmed blacks and 19 unarmed whites in 2019, according to a Washington Post database, down from 38 and 32, respectively, in 2015.In 2018 there were 7,407 black homicide victims. Assuming a comparable number of victims last year, those nine unarmed black victims of police shootings represent 0.1% of all African-Americans killed in 2019. By contrast, a police officer is 18½ times more likely to be killed by a black male than an unarmed black male is to be killed by a police officer.The latest in a series of studies undercutting the claim of systemic police bias was published in August 2019 in the Proceedings of the National Academy of Sciences. The researchers found that the more frequently officers encounter violent suspects from any given racial group, the greater the chance that a member of that group will be fatally shot by a police officer. There is “no significant evidence of antiblack disparity in the likelihood of being fatally shot by police,” yet again, you have no idea what your talking about!

No, it doesn't imply that and the statistics don't support that assertion. While arrests are sometimes used as a measure of the “first stage” of involvement with the criminal justice system, many encounters between the public and police do not result in arrest. This is especially true for women, who account for a much greater share of public-policy interactions than they do actual arrests. What's interesting is the number of men arrested declined by 30.4 percent in the last 3 years and the number of women arrested also declined but only by 6.4 percent. As men’s arrest rates have fallen sharply while women’s arrest rates have remained fairly flat. As a result, women are making up an increasingly larger share of all arrests. Consequently, women’s share of arrests, women’s share of police encounters that involve the use or threat of force has increased significantly since 1999. Common sense would dictate that individuals would do a little research before making such inane comments.

So if the police were unarmed what happens next time there is a mass shooting like the one last year in Christchurch? Last year in New Zealand, there were 3540 occasions where an offender was found with a gun. A police officer was attacked by someone wielding a gun 13 times in 2019, up by two over 2018 but remaining steady over the past five years. How do the police protect the population and themselves safely in these situations without weapons? Police data shows officers presented their firearms 305 times in 2019, while faced with more than 3500 firearms incidents with less than 1 death per million people. The logic in the article is stupid! Im not affraid of the police being armed, they need weapons to protect us and themselves. The absence of weapons for law abiding citizens to protect themselves and their property means that police need to be armed. There is ZERO logic in anything published in this article! What does some English student know about law enforcement?