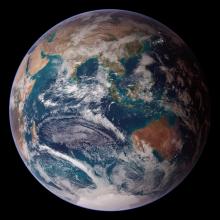 Photo: NASA
Let's work to ensure people from all over the world find a place they belong, writes Paul Trebilco.

I was at a wedding in Nelson last month, where a young man from New Zealand married a young woman from Sweden.

At the reception, the father of the bride began by saying that his parents had looked for their partner in the village where they lived, that he had looked for his partner in Sweden, and now his daughter had looked for her partner around the world and ended up marrying someone from about as far away as you could get from Sweden.

He added that he was worried that the next generation would look for their partners on another planet.

The whole occasion certainly made the reality of the globalised world in which we live even more real for me. And since then we’ve had many reminders of all the inter-connections in our world, including of course Covid-19 (coronavirus). The world is a smaller place than it used to be.

How do we live well in our increasingly globalised world where our religious, cultural and ethnic differences are often expressed in fear and prejudice towards those not like ourselves?

Jesus’ teaching speaks strongly into this situation. Rather than seeing those he interacted with as belonging to some group or other, he saw them first of all as people. He challenged any world view that speaks of "us" and "them". He spoke with a Samaritan woman, and asked her for a drink. She asked Jesus, "How is it that you, a Jew, ask a drink of me, a woman of Samaria?" (John 4:9).

In speaking with her, Jesus overcame two forms of discrimination that she suffered, that she was a woman, and that she was a Samaritan. The author of John’s Gospel adds that "Jews do not share things in common with Samaritans", for there had been deep enmity between the two groups for centuries.

Yet Jesus still asked her for a drink, and discussed serious religious issues with her. He overcame divisions that had plagued his world.

He simply would not go along with long-held prejudice and had no time for the sense of superiority that most groups had when they viewed other groups.

Jesus also instructed his followers: "If anyone wants to sue you and take your coat, give your cloak as well; and if anyone forces you to go one mile, go also the second mile" (Matthew 5:40-41). Who was forcing whom "to go one mile"?

A Jew could be forced to do this by a Roman soldier, who could force someone to carry their belongings this far. But Jesus instructed his followers to go two miles and this for the hated occupiers of the land. He was teaching his followers to overcome enmity and hatred. Again, he is overcoming barriers, deconstructing ancient prejudices, changing the way the world is to be seen.

In his teaching, Jesus undermined the idea that the world can be divided into "us" and "them" on the basis of ethnicity. Samaritans and Romans were not to be despised, but were rather recognised as neighbours.

The early Christians continued to believe that there were no "outsiders" on the basis of geography or ethnicity. They took their message "worldwide", although of course, their world was rather smaller than ours.

The apostle Paul talked about the Gospel "bearing fruit and growing in the whole world" (Col 1:6) and being "believed in throughout the world" (1 Tim 3:16). They sent letters to each other across their world of the ancient Mediterranean, letters in which they expressed their "oneness in Jesus Christ", even though people were so different in many ways.

Their sense was of being interconnected with each other, of being part of one new family. To make this real, they called each other "brother and sister", even though they had no biological or kinship connections at all. They saw themselves as adopted into a new family of God, which made them each other’s brothers and sisters, regardless of the many outward things that made them seem different and even alien to each other.

The apostle Paul also organised a collection from Gentile (non-Jewish) churches across the Mediterranean for the Jewish Christians in Jerusalem, who were suffering from the effects of a famine.

Gentiles giving money in this way to Jews was highly unusual.

Again, it involved breaking down ancient barriers between peoples and forging new patterns of belonging together.

Although "the world" for both Jesus and the early Christians was quite different from our world, they chose to make their world one in which everyone had a place. Former enemies and former strangers now all belonged together as part of a new family.

I had something of this experience back in August last year, when for a few weeks I attended an international church in Vienna.

It wasn’t a large church but there were literally people from all over the world there. We were all different, but the globalised world was all under the one roof, and it was great.

May our city and our country also be a place where people from all over our globalised world find they belong. May we help to make it so.

-  Paul Trebilco is professor of New Testament Studies in the Theology Programme at the University of Otago.