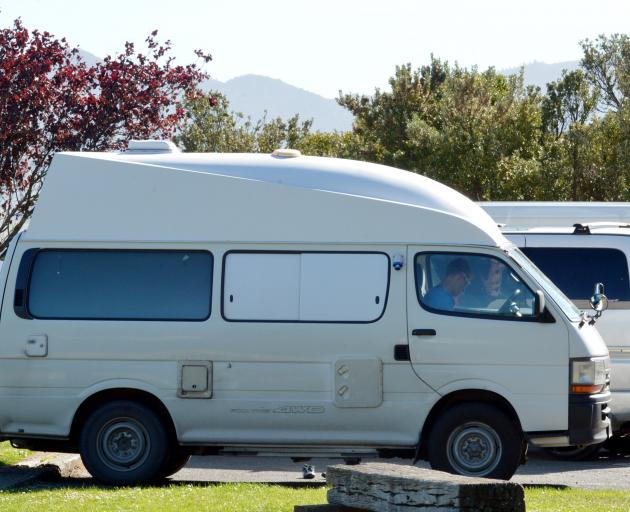 A tourism strategy needs to ask questions about the use of camper vans among a wide range of other things, the writer argues. PHOTO: ODT FILES
A strategic approach to tourism is essential, writes Robin McNeill.

When I asked, the warden at the Department of Conservation's Moke Lake campground, near Queenstown, said it was clear visitor numbers were up 20% this summer. The campground was at capacity, as was the bigger campsite down the road at Twelve Mile Creek. His estimate matches my colleagues' at Venture Southland who calculated the number of visitors to Milford Sound increased 19.8% last year. Both were off the previous year's record high. I had observed that the Doc Eglington Valley campsites were at capacity last February.

The Walking Access Commission worked hard this past year to persuade private landowners at Roaring Meg and three other sites around New Zealand to reopen tracks through their properties - the landowners had closed access because mountain bike and foot traffic was overwhelming them. Dissatisfaction in Otago at the sharp edge of tourism ran at 27% last year, according to some sources. Even Chinese language social media is becoming critical of crowding. Unsurprisingly, the recently released McKinsey Report worries that tourism's ``public licence to operate'' may be about to expire.

It makes no sense to spend less on the product than we do marketing it, especially when tourists leave behind $2.8billion each year in GST.

The McKinsey report hints we should look to high-value rather than bulk tourism. Putting aside equity concerns and a tourism hospitality industry reliant on low-wage foreign tourists for service provision, this seems sensible. However, New Zealand is a land of small shopkeepers: last summer helicopter operators dependent on tourists pressured Doc to allow them tenfold more helicopter landings on Mt Tutoko instead of increasing prices to ration the experience and increase profits. Our roads are full of camper vans and ``rent-a-bugs''. There is no end in sight of the ``mattress sleepers'' - tourists who sleep on mattresses in station wagons.

Belatedly, the McKinsey Report calls for a tourism strategy to be prepared. Yes, and soon! However, such a strategy needs public support and input. Such a strategy needs the big tourism players' views, but it especially requires input from Doc and NGOs, such as Federated Mountain Clubs, who understand the impacts of tourism on our backcountry. It requires input from the Tuataperes the tourists pass through. It needs buy-in from local councils, who live with the results. It needs to have teeth, so the shabby ex-hotel at Milford Sound can be compelled to be upgraded to match a destination that draws 10% of tourists to New Zealand. The report needs to be wide-ranging and thoughtful: do we have lots of camper vans primarily because our rural public transport is non-existent? Must we have glacier landings in every national park? How do we divert tourists to Taneatua to enjoy Ngai Tuhoe's hospitality? Should tourists pay for public goods? How do we avoid displacing locals? What does the tourist of the future look like? Then we need action, and with alacrity.

That's a tall order. Alternatively, we put up the ``Full-No Vacancy'' sign at Auckland Airport next year.