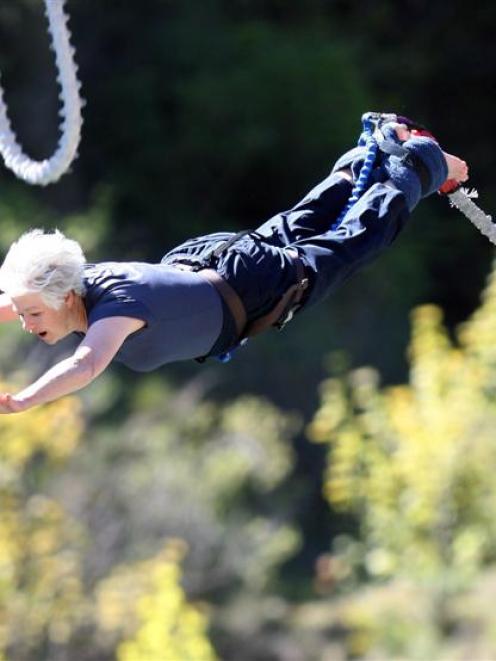 Over-educated? Does New Zealand really need people with diplomas of tourism running bungy jumps. Jeanette Fitzsimons, then co-leader of the Green Party, jumps from the Kawarau Bridge, near Queenstown, in 2008. Photo by NZPA.
Education may not be the key to national prosperity. Major changes in the funding of tertiary education will start biting this year.

Universities, polytechnics and other tertiary educators are no longer funded on a "bums-on-seats" basis. The era of tertiary institutions competing to attract students and funding is a thing of the past.

The likely outcome is that many students will be denied admission to courses because they do not meet the tighter academic entry criteria. The finger will be pointed at the Government for under-funding tertiary education.

Perhaps it is time to reconsider the role of tertiary education as a driver of economic prosperity.

Several years ago we were inundated with the mantra of the knowledge economy and the need to catch the knowledge wave. The belief was that education is the key to prosperity in the new era of technology-based economies.

A Harvard University study for the period 1960 to 1987 found little correlation between education levels and economic prosperity over a range of countries. This appears to fly in the face of conventional wisdom.

There is evidence to suggest that pouring money into tertiary education may not be the silver bullet for achieving higher living standards. Economic growth is the result of increasing the value of output per worker.

The key element is productivity levels. Much of what is learnt in school or university does little to increase the future potential output of the learner.

This is not to deny that education has great value in producing people who can live a good life and participate fully in society. The question is whether levels of tertiary education are the key to economic prosperity.

In 1960, Taiwan had a literacy rate of 54%, whereas the Philippines had a rate of 72%, yet Taiwan now has a standard of living 10 times that of the Philippines.

Until the early 1990s the Swiss had one of the lowest university participation rates in the OECD and yet had one of the highest levels of productivity and prosperity in the world. Many countries of the former Soviet Union have well educated populations yet dismal economic performance.

There seems to be a conundrum here. Surely, education levels must have some influence on productivity and living standards. The likely answer is yes but only to a limited extent.

The tertiary participation rates in New Zealand have surged over the past two decades but there is little evidence that this has translated into increased labour productivity and economic wellbeing.

The need for highly educated workers to man the knowledge economy is largely a myth. Much of the knowledge of the modern economic environment is embedded in the capital that workers use. That capital may take the form of computers, earthmoving equipment, laboratory gear or robotics.

The knowledge economy has meant that many jobs have become deskilled or redefined. The checkout operator no longer needs to add. Procedures once performed by doctors can now be done by nurses and chemists. The accountant can produce final reports at the push of a button.

What appears to have happened is that as more people have sought to gain higher qualifications this puts pressure on others to do likewise. An implicit function of any education system is to act as a sorting mechanism. As rampant qualification inflation has occurred the entry bar to various occupations has been raised, compelling people to seek higher qualifications.

The new era economy that we are living in is nothing new. Ever since the start of the industrial revolution new technology has driven economic growth. It is arguable whether this process has accelerated in recent years.

The massive technological changes from 1850 to 1950 dwarf more recent developments in their impacts on people's daily lives. Consider such innovations as cars, planes, electricity, fridges, air-conditioning and the telephone.

These innovations were not the outcome of tertiary-educated workforces. They were developed by a core of thinkers, scientists and innovators then diffused by entrepreneurs through the marketplace for mass consumption.

Prosperity is determined by how well a society uses its resources to produce final goods and services. Pouring huge amounts of public funds into formal tertiary education may be a distraction from this goal.

When the changes in funding to the tertiary sector start biting there will likely be an outcry. Cries of elitism miss the point. We need our best and brightest to be very highly educated so they can develop the tools and technologies for the rest of us to use, so we can become more productive.

But not everyone can make the All Blacks. We don't need people with management degrees driving taxis or diplomas of tourism running bungee jumps.