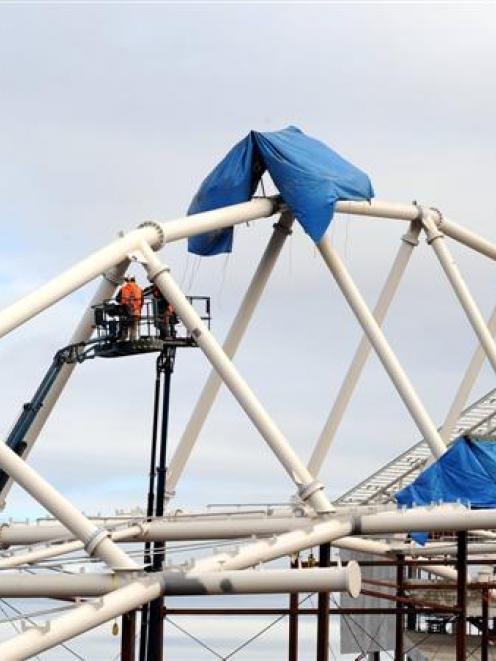 Work is carried out on the Forsyth Barr Stadium roof truss,. Photo by Stephen Jaquiery.
Does the Dunedin City Council have a recipe for increasing rates and debt, and are its elected officials either devious or incompetent - as some of the council's critics suggest? Richard Walls answers some specific criticisms.

Calvin Oaten avers (ODT 19.7.10) that after sifting through the DCC accounts, the city has a recipe for both increasing rates and increasing debt.

Unfortunately, his recipe, not for the first time, omits some key ingredients.

"No wonder Dunedin's rates are so high."

Simply an opinion. And an unsupported opinion at that.

No facts, no comparisons.

The facts would, of course, get in the way of the case Mr Oaten attempts to build.

Dunedin has one of the lowest average residential rates in the country and mixes it competitively with its peers even when the dividend income from council investments is excluded - a dividend that, this financial year, will reduce the average residential rate in Dunedin from around $2095 to $1641 on a property valued at $291,000. (Note: the figure given is approximate because of the varying impact of GST in the period.)

Surely the question that Mr Oaten and others should be asking is: do we get value for our rates dollar? That is certainly a legitimate question and one for objective debate at any time, especially when we consider our annual budgets (the draft annual plan) and, of course, right now with council elections imminent.

So while expenditure and the activities that council undertakes should be (and is) constantly under scrutiny, and bearing in mind that just maintaining services at current levels accounts for something between 90% and 95% of rating income, just what services would Mr Oaten cut?

What lesser standards would he accept?

What the council spends is set out in each draft annual plan. An insert in the relevant City Talk carries a summary of spending by activity in simplified diagrammatical form.

Last year, a rates funding working party recommendation that a breakdown of the spending should show on each rates assessment notice sent to ratepayers was adopted by the council and appeared on the reverse of the notice.

This year, the detail in the breakdown has been taken further.

It now shows both a gross and net breakdown for the general rate, which covers all activities generally referred to as discretionary: i.e. those we contribute to for community purposes as distinct from targeted rates such as water, which are for services directly delivered to individual properties.

It also shows the beneficial contribution of investment income.

Unfortunately, the detailed legal requirement relating to rating information that the assessment notice must carry does not leave sufficient space for the new breakdown and the changes in GST.

In its place, the notice for this financial year, currently being sent out, therefore explains how ratepayers may obtain rating information relating to a property: the first is by going to the DCC website at http://www.dunedin.govt.nz/services/rates-information/rates, entering your property address from the drop-down window and clicking through from there; the second is by telephoning the DCC customer service centre on 477-4000 and requesting that it be posted to you.

Now, let's turn to council debt and the "deceptions" alleged by Mr Oaten.

Straight from the "recipe book" - the now confirmed Annual Plan.

Then, says Mr Oaten: "This is achieved by transferring the DCC's costs of the stadium to Dunedin Venues Ltd, which is to be part of the DCHL group. In doing so, DVL will raise some $104 million and pay the DCC, thus removing that debt from its books. Of course it does not go away, it simply becomes DCHL's burden."

Yes, the recipe does say that Dunedin Venues Ltd will take over the debt that the DCC has incurred in building the stadium.

Nor is there anything new in that.

It is well documented.

Mr Oaten departs from the script, however, when he says Dunedin Venues Ltd "is to be part of the DCHL (Dunedin City Holdings Ltd) group".

Indeed, he does so deliberately knowing full well from a direct discussion with Mr Athol Stephens, general manager, finance and corporate, as well as exchanges with me on the What If Stadium website, that DVL, like its sister company DVML (Dunedin Venues Management Ltd), is not part of the DCHL Group.

The essential difference between the two is that CCOs remain the direct responsibility of the council and the council ultimately stands behind them.

I won't repeat the raft of reasons why the ownership and operational costs of the stadium and other similar bricks and mortar properties proposed to be included have been structured within DVL as a CCO. They have been well canvassed and result in considerable benefit to the ratepayer, directly and indirectly.

Mr Oaten writes of "an additional amount of interest amounting to $44.35 million", describing it as a "deception".

And that if it was to fall where it belongs, would "result in a rate increase this year of some 18%".

He is referring to interest that has been or will be capitalised into the final cost of assets under construction, or to be constructed.

When borrowings are needed to fund construction of an asset, accounting standards require that, like any other cost of construction, interest on the borrowings is capitalised into its cost.

Of the $44.35 million, payment of $6.7 million (15%) will be deferred by adding it into the associated debt during construction.

Once construction has been completed, repayment of the debt will start.

The remaining $37.65 million of interest is paid as it is incurred out of a mixture of rates and non-rates income.

These interest payments are already reflected in the three prudential ratios the council uses.

The interest payments have not been deferred for the purpose Mr Oaten claims.

There is no deception.

When false assertions are published, the council has no option but to publish the truth.

Mr Oaten then omits to say that at the time ownership of the stadium passes to DVL, the commitment to the repayment of the loan, the ratepayer share, remains unchanged - although the way of doing so does change.

The current levy of $66 on the average residential property with a rating valuation of $291,000 will cease in the 2011-12 year when it will instead be deducted from the investment dividend received by each ratepayer.

Such investment dividend is distributed on the same pro-rata basis as the general rate is calculated, i.e. if the value of a property is more, you receive more and vice-versa. Mr Oaten's position goes completely awry when he mischievously stirs in "intergenerational equity", suggesting it is a euphemism related to the deferment of interest.

I say mischievously because he well knows that intergenerational equity is a term (not a euphemism) applied to the funding of long-term assets that will serve successive generations of users: that is, spreading the costs over long-life assets such as a sewer or water reservoir at Mt Grand that may last for, say, 80-100 years.

Is it being suggested that the current generation should pay the lot upfront and bear the full cost of depreciation as well? That, along with the annual (and seemingly always increased) asset revaluations, would be nasty medicine for current ratepayers indeed.

Mr Oaten has been a vociferous critic of the Town Hall/Dunedin Centre redevelopment and the stadium.

The continued hit-and-run campaign he and others are running on council debt is simply rooted in that.

Dunedin is carrying a level of debt that is historically high.

Whether one agrees with that or not, it is tied to the major capital projects the council has committed to in its community plan (the LTCCP).

While the stadium is part, the major drivers of council borrowing remain core infrastructure, in particular water and wastewater.

And our borrowing pales in comparison with that of our peers to the north - Auckland recently seeking to raise a mere $350 million to fund part of their requirements in one hit.

As with the spending of rates, it is entirely legitimate for proposed capital projects - which are the only items of expenditure that can be funded by loan - and their priority to be fully debated.

But Mr Oaten consistently ignores that loans must be repaid and that the DCC plans this precisely before committing itself to taking them out.

Indeed, it has a respected record of doing so which perhaps explains why it has been able to secure funding through the turbulent period of world recession and at very competitive rates.

The debate on council spending, on its projects - on anything - does, I suggest need more rigour, objectivity and, dare I say it, more respect for the opinion of others than Mr Oaten brings to it.

Richard Walls is chairman of the DCC's finance and strategy committee.

He has yet to confirm whether he will stand for re-election this year. 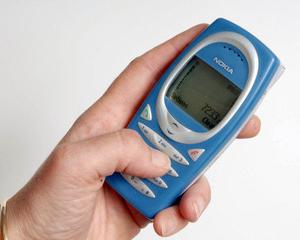