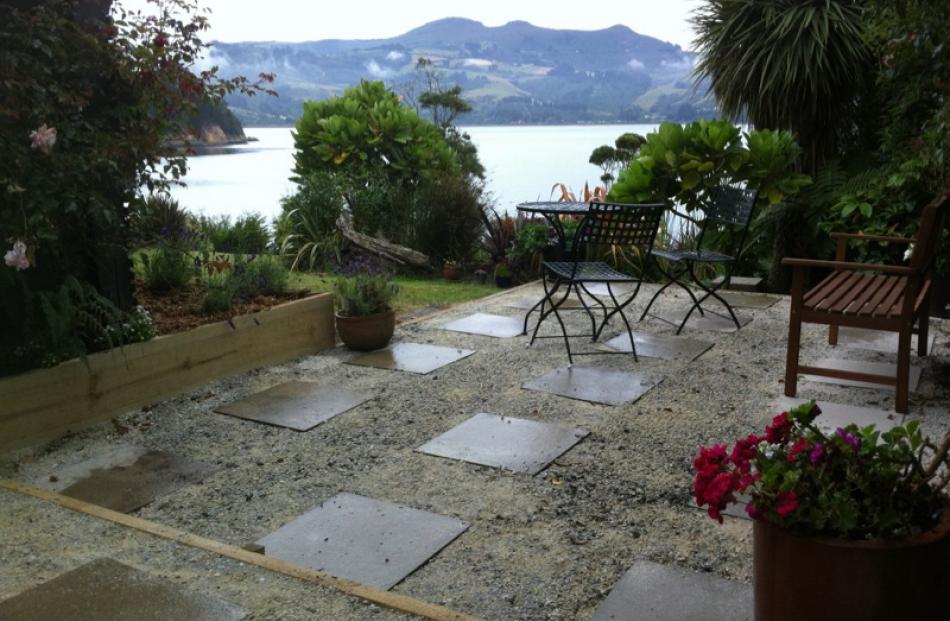 Outdoor room with a view. Photo by Simon Cunliffe.

It wasn't so much the bare, urine-burnt patches of grass at the bottom of the wide garden steps that offended. No, that could be put down to sheer sloth on my own part, shooing the dog down in that direction late in the evening instead of taking him for a regulated constitutional stroll - to do his dirty work elsewhere, or kill some wild weeds on a roadside verge.

Rather it was how, when the steps hit the ground, the patchwork surface sloped away to the right and downwards towards the makeshift square of pavers, jammed together to form a semblance of flat ground beneath the northeastern boundary of the property.

The same khaki patchwork stretched a couple of metres before dropping, step-like on to the small square. But call it a step you could not. The weather and workmanship had combined to warp out of all pretence of straightness the timber retaining plank and the earth behind it, taking advantage of the bowing wood, advanced accordingly, spreading its weedy growth as it went.

The effect, particularly when wet, was of a minor hazard for the careless of foot, or challenged of sight. If the slope didn't do for you, the bent, now rotting excuse for a step-riser might.

And when you walked forward beyond the pavers and looked back, the world seemed on a slant; the level of the pavers and the horizontal plane of the steps were out of whack, perhaps not by much but the discrepancy between the two gave the whole enterprise a lopsided look. Quite some time ago, this visual tic had begun to itch.

Furthermore, the pavers formed a square too small and too tight to be of much use, and the weeds stubbornly appeared between the cracks, however many times they were pulled.

The area cried out for attention, consideration lavished on other parts of the section at the expense of this potentially rewarding corner of the garden. For here, late in the day the stooping sun, almost spent in the west, reached out across the headland at the edge of the bay and provided, for an hour or two, a pleasant caress of warmth. It was the right place for a garden patio.

Come New Year's day, come a DIY building project, the latest in a portfolio of skirmishes between the natural world - contours, clay, sloping ground and unhelpfully rampant vegetation - and man's dominion over it.

It should, of course, have been a one-sided affair, with weapons of intelligence, craftsmanship, electric tools and the like pitted against the mere inanimacy of the substrate ground, but the scars of the battle always show: crooked angles, shonky levels, gap-toothed timber joins, and other infelicities betraying the amateur builder's handiwork.

Still, deep inside every red-blooded Kiwi bloke there is evidently a landscape builder just itching to get out. It's in the DNA and I, it seems, am no exception. Besides, how hard could it be to build a patio?

Well, harder and more time consuming than you might think.

What I admire most about watching skilled craftsmen and women at work is the certainty and confidence with which they ply their trade, as if it was all second nature; as if there was a plan or a blueprint imprinted on their frontal lobes. I suppose it's called "skill and experience".

The amateur, on the other hand, is like an ingenue groping in the dark, figuring it out as he goes, adjusting accordingly, ignoring the basics of carpentry, finally allowing the ground its small victories in return.

Three days of digging into clay compacted earth, carving out the steps; of marking and re-marking the patio area; two or three visits to the big orange shed timber department; and for the gravel and lime chip a trip or two to the garden centre around the corner. Moving the old pavers, levelling the ground, setting the retaining edges - even working around, boxing in, the climbing rose - then laying the weed matting, raking over the gravel replacing the slabs ... until, finally, an outdoor room with a view.

Not perfect, far from it, and enough of those wonky bits for the practised eye to note and nod with wry superiority, but a patio nonetheless. DIY Man's dominion reasserted. All is well with the world - at least for the moment.