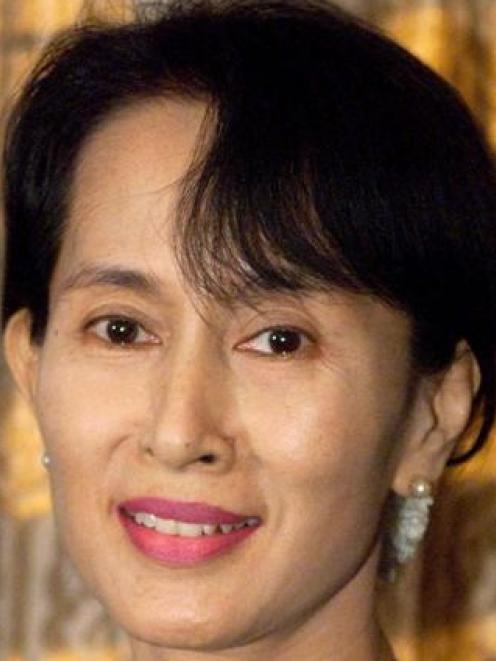 Aung San Suu Kyi. Photo from Reuters.
Last month, as the anti-Muslim violence in Burma spread from Rakhine state in western Burma to the central Burmese city of Meiktila, Aung San Suu Kyi sat among the generals on the reviewing stand as the Burmese army marched past on Armed Forces Day.

She is seen as a saint by many people - but she didn't say anything about Meiktila, where just days before at least 40 people were killed and 12,000 made homeless.

She hasn't condemned the far greater violence against the Muslim Rohingyas of Rakhine state during the past year either, but there she had at least the flimsy excuse that this group are portrayed by the military regime as illegal immigrants from Bangladesh.

The military regime even revoked their Burmese citizenship in 1982, and they have never got it back.

The claim that the Rohingyas are foreigners is a despicable lie - the first written mention of Rohingyas in Rakhine dates back to 1799 - but Aung San Suu Kyi didn't say that. She just murmured that ''We have to be very clear about what the laws of citizenship are and who are entitled to them''. Meiktila, however, was different.

The Muslims of Meiktila, who make up a third of the city's population, are not Rohingya, and there is no question about their Burmese citizenship.

There is a large military base in Meiktila, and yet for two days the army did not intervene to protect the Muslims. And once again, Aung San Suu Kyi did not condemn what was happening. What is going on here?

There is a long game being played in Burma, and we will not know its outcome until the national elections scheduled for 2015.

The officer who launched a democratic transition after he became president in 2011, General Thein Sein, seems willing to return the country to civilian control after 50 years of military rule - but he certainly intends to retain a major role for the army in Burma's politics.

Thein Sein's main motive for withdrawing the military from power is probably to end the country's pariah status. As a result of the brutal and corrupt rule of the generals, Burma has long been the poorest country in the region. But there are several reasons why he would want to keep the army's influence high.

One reason is that his fellow generals would overthrow him if he did not protect them from future prosecution for their past crimes. Another is that the army is obsessed with maintaining Burma's unity.

Only two-thirds of the country's 60 million people are actually ethnic Burmese, living mostly in the Irrawaddy river basin. All around the frontiers are large ethnic minorities - Shan, Karen, Mon, Kachin - most of which have fought against the centralising policies of the military dictatorship in the past.

The military don't believe that a strictly civilian government would be tough enough to hold the country together, so they have no intention of giving up power completely. As things stand now, however, that is precisely what will happen: in last year's by-elections, Aung San Suu Kyi's National League for Democracy won 43 out of 44 parliamentary seats at stake. The military's candidates would be simply wiped out in the 2015 elections.

The army has to find some way to make itself more popular politically, and the obvious way is to position itself as the defender of Burmese unity against treacherous minorities. Then it might win support from the majority population - or so it clearly believes.

The real separatists are way up on the frontiers of the country, far from the view of the majority population - but the Muslim (5%), Chinese (2.5%) and Indian (1.5%) minorities live right among the ethnic Burmese majority. So far only the Muslims have been targeted, but there is reason to suspect that the military was implicated even in the first outbreak of anti-Rohingya violence in Rakhine.

There is no doubt the army is now complicit in anti-Muslim violence elsewhere in Burma. The military are clearly hoping that Aung San Suu Kyi will speak out in defence of the Muslim Burmese, and thereby lose her popular support among the highly nationalistic majority.

Knowing this, she has chosen to remain silent, presumably thinking that all this can be fixed after she wins the 2015 election. This is almost certainly a mistake.

At some point in the next two years, Aung San Suu Kyi is going to have to decide which way she wants to go.