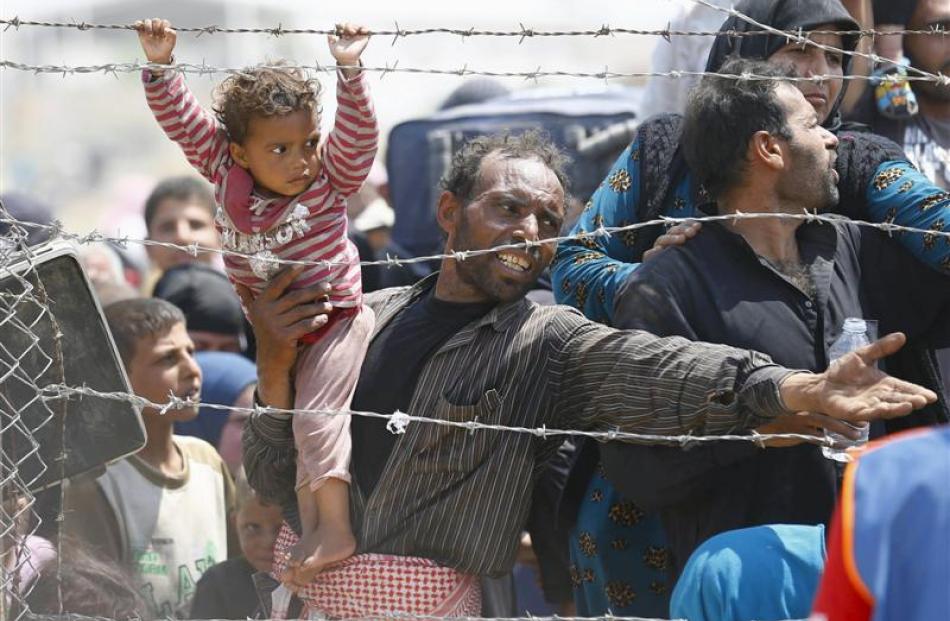 A Syrian refugee holds on to his daughter as he waits to cross into Turkey this week. Photo by Reuters.

One thing the names on the monuments in almost every town in the country will tell you is that New Zealand did its fair share in the major conflicts of the 20th century.

While New Zealand faced terrible combat losses, it was largely spared the suffering of civilians that is the almost universal experience of countries that themselves become war zones.

We are fortunate not to know what it is to have to flee our homes or country for our lives.

We are all familiar with the horrors of the industrial-scale killings of civilians by the Nazis.

But what isn't so well known is that many of those who fled Germany before the war were sent back to their deaths because they had no legal way to claim refugee protection.

At the end of the war the world reflected in shame on the way many refugees had been treated.

And so the Refugee Convention was set up.

It is the international agreement that establishes the legal right for any of us to claim protection, or asylum, in another country.

The criteria the convention set up are tough.

No-one can claim refugee status and protection unless they can show that they are fleeing war or persecution.

The convention also set up the United Nations High Commissioner for Refugees, tasked with running a system of refugee resettlement.

It is they who assess the people New Zealand accepts through its refugee quota programme - any who turn out to be economic migrants are not eligible.

This refugee assessment system generally works well but there's one massive problem: some countries simply aren't stepping up to do their fair share, and unfortunately New Zealand is one of them.

Many countries, such as Thailand and Lebanon, are forced to play a large part by accident of geography - they happen to be close to wars or human rights abuses.

Many other countries are more isolated from the issues but are still doing their bit, largely through resettlement programmes.

Canada, Sweden and even Australia, to name a few, take many times more refugees than New Zealand even on a per capita basis.

But New Zealand, separated by ocean from people arriving on its shores, takes just 750 refugees through its resettlement quota each year.

In the face of the largest number of refugees worldwide since World War 2, New Zealand hasn't increased its refugee quota in almost 30 years.

In fact, New Zealand is now 87th on world rankings for intake of refugees per capita, and falling.

While New Zealand runs a good-quality resettlement programme, the tiny size of it has led us at Amnesty International to the conclusion when it comes to refugee resettlement, New Zealand is lagging well behind.

New Zealand's refugee quota will soon be up for its three-yearly review by the Government.

Immigration Minister Michael Woodhouse has indicated that he has an open mind about the possibility of an increase.

There are three reasons that we believe compel us to do our fair share as a nation.

Firstly, as New Zealand takes on the presidency of the UN Security Council in July, we will be seeking to show ourselves in the light that we ran our Security Council election campaign - a principled voice on the world stage that punches above its weight.

We'll be talking about responses to conflicts around the world, but without doing our fair share on refugee resettlement that talk will have a hollow ring.

We can't ask other countries to do their fair share if we're not doing ours.

Secondly, this is something that we can easily do, and we can do it without compromising the quality of the programme.

It's important to remember just how tiny - even for a country our size - our intake at 750 is.

It's a fraction of the over 40,000 total net migration into the country.

There are upfront costs to resettling refugees, but we'd do well to remember that while it's often tough for them at first, most refugees eventually establish themselves well and they and their children go on to become strong contributors to our country.

And finally, bringing in a larger number will save lives.

People don't take terrifying journeys on unseaworthy boats to joyride, they do it out of desperation when the alternatives are even more horrifyingly atrocious.

Take the time to speak to refugee families who have found safety here and you will find that, for the people we can help, this means everything.

Each has a story and is very much more than a drop in the ocean.

Increasing New Zealand's refugee quota is long overdue - something we should have done a long time ago.