Transport system must respond to change 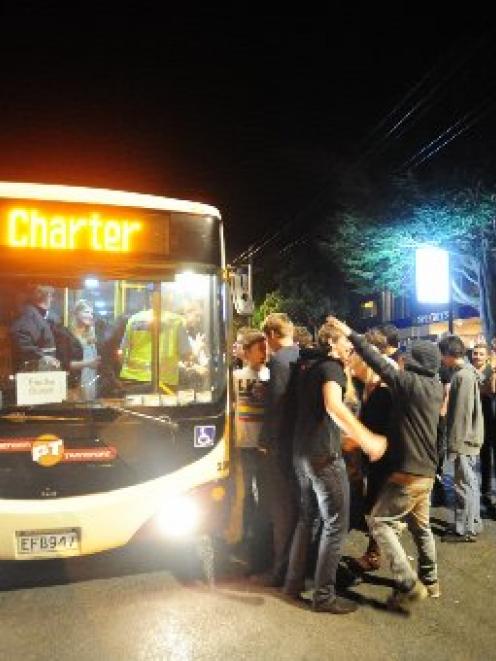 Students queue for a bus after the closing down of favourite student pub the Gardens Tavern earlier this year. The 20,000 student population is an important aspect of a resilient transport system. Photo by Craig Baxter.
One topic doing the rounds during this local election campaign will be sustainable transport.

No doubt every prospective councillor will say we need a sustainable form of public transport for Dunedin - but how realistic are the chances of this happening? It is not just about transport.

For sustainable transport to ever become a "fact of life" it needs to consider the urban form of the city - not just buildings, open space and roads, but the networks that link them and the activities that make people move around.

Transport is only part of the package; it drives land development and responds to it.

When considering sustainable transport we also need to think about the whole transport system.

Wherever we live in Dunedin most of us leave home to get to work, take children to school or after-school activities, go to the doctor, do shopping, visit people etc.

Transport is very much a social process.

Sustainable transport is not just about providing a transport service, but of making it comfortable and stress-free.

Any hope of getting cars off the road will rest with how we tackle the problems of the needs of parents, older people, commuters and freight.

The main reasons behind the central parking problems in Dunedin were two-fold: introducing increased car-parking costs on the same day as bus fares went up and having no viable alternative for the motorists to use to get into and out of town.

Nothing can be more clear-cut in showing how a parking strategy with good intent can become a disaster when considering only one part of the problem: cars.

If a reliable, frequent - buses at least every 10 minutes during rush hours - bus service with affordable fares was in place before the introduction of the parking strategy then the chances of it being accepted by the public would have greatly increased.

You are never going to satisfy everyone, however.

Any resilient transport system must adapt to social change and respond to the need for greater accessibility, as well as changes in commercial settings and freight movement. As well as this, it will need to respond to the changes peak oil will bring.

However, the current realities of a worldwide recession and the political direction here in New Zealand means - certainly in Dunedin - sustainable transport is one of the first things to be put to one side.

Those local politicians advocating a sustainable transport system for Dunedin need to understand the complexities of such a move and that, because of Dunedin's physical landscape, such an option will not come cheaply.

Telling people to leave their car at home and cycle or walk to work or catch the bus will achieve nothing.

One of the biggest issues regarding sustainable transport in Dunedin is avoiding new barriers for people already disadvantaged or marginalised.

The student area in North Dunedin and the South Dunedin area are already a victim of this, in the sense that not only do they pay more for transport but are further away from essential and community (i.e. library) services.

So, is it an impossible task? No - because nothing is impossible once you set your mind to it.

However, any piecemeal approach in an attempt to tinker with the present below-standard service by spending small amounts will be fruitless as it will not serve to encourage people to use the current service.

Any politician with a vision for Dunedin's transport system must address the fact that a major financial outlay will be required for an effective sustainable transport system, one that encompasses bus, rail, cycling and walking and not just the tinkering that will be promised.

Having a vision for 10 or even 20 years is fine, but the only visions worth considering are ones that come with a viable plan of how to get there.

Dunedin can indeed have an efficient, sustainable transport system, one that encompasses an integrated system comprising buses, trains, cycleways, walking and even light rail and cable cars, while complementing the social, community and land-use requirements of Dunedin.

These will all come at a price.

But surely Dunedin is too small to have a sustainable transport system.

Says who? The detractors always seem to quote from knowledgeable sources - mainly because they do not know any different.

A town with a population of around 120,000 like Dunedin can have an effective and enviable public transport system - just look at Hamilton where they have just one council body looking after the transport system.

Having the running of public transport in Dunedin split between the Otago Regional Council and the Dunedin City Council is probably the biggest impediment to improving the service.

Things can start to be done immediately. We have 20,000 students in the city - offer them 25% discounts to travel on buses, or even student travel cards.

As the university seems awash with money they can do their bit for Dunedin by providing free shuttle services to the university from areas populated by students.

Offer our older folk free travel from 10am to 3pm. Invercargill (population 25,000) can do it - why can't Dunedin?Any new cycleways must, where appropriate, have a median between them and the traffic lane.

You are not going to encourage more people to use a bike if there is no physical separation between them and the articulated lorry that goes past on their shoulder.

Walking corridors that are attractively landscaped to make a walking journey more appealing can be constructed.

The more people walking on a road the safer a feel it has to it. This will not cost a great deal.

Yes, subsidies may be required until sufficient numbers use bus travel, but the system will be supported by the Dunedin public if it responds to social change and the need for accessibility.

While these schemes and ideas are taking off, the wider issue of how to incorporate rail travel from West Harbour-Port Chalmers and Mosgiel into Dunedin can be developed along with the introduction of modern transport systems (such as light rail) or, being a heritage and cultural city that Dunedin claims to be, the reintroduction of trams and cable cars.

Three years ago, after the last local elections, there was talk from various councillors quoted in the ODT that one council body should look after the transport system.

We are still in the same position because no-one is prepared to deal with this political hot potato.

It is all a question of priorities and, unfortunately, what could be a vital link in keeping the economy moving by providing ease of travel around the whole of Dunedin for everyone will be consigned to the too-hard basket - not because of a lack of vision, but because of a desire to avoid taking on a tough job.

Phillip Cole is a member of Sustainable Dunedin City and a resident of Dunedin.