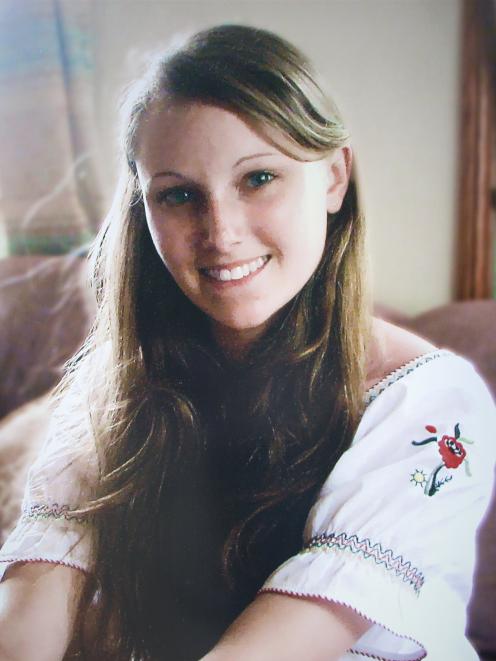 Sophie Elliott who was murdered by Clayton Weatherston in 2008. PHOTO: ODT FILES
What value do you put on life? In January 2008 Dunedin woman Sophie Elliott was murdered in her home by a former boyfriend. Her father Gil Elliott makes a case for the Government to compensate the families of victims of "non-accidental" deaths.

This is something that I have been meaning to write for sometime. I was prompted to do this when I heard on the radio news this morning, but it could be any morning, (in a coroner’s report) that yet another person had been killed in a forestry accident, albeit three years ago.

The company he worked for was fined quite a large amount of money and the family of the victim was "paid/recompensed/compensated" for his death in the amount of $110,000. Of course, no amount of money replaces a loved one, but it does help initially with the myriad things deceased families need to do and goes a slight way to compensating for lost future income.

It seems that if a worker is killed on the job or even a tourist is killed while say jet-boating, then the company or the tourist operator if found negligent is fined and compensation is awarded to the family of the victim.

I recall a case a few years ago of an accident involving a jet-boat near Queenstown where a young English female tourist was thrown into the water following a crash, was caught under a rock and drowned. The tourist operator was found to be negligent and in this instance the company was fined and (the insurance company) paid ‘‘compensation’’ to the family in excess of $100,000. The body needed to be repatriated to the UK and no doubt this money was helpful.

I could relate many instances where so-called compensation has been paid to the family of a victim following a workplace accident.

The case of the young soldier a few years back who drowned in a lake during an army exercise and where the army (read Government or taxpayer) paid the family about $100,000. Or the more recent situation of the Pike River Coal mine explosion(s) where the families of the victims were paid in excess of that sum of money (from a fund controlled by the coal company or persons associated with the coal company).

I want to move on now to non-accidental deaths, the ones where no compensation/reparation is paid. This might be hard for the general public to grasp if they have not themselves been through a situation as above or perhaps as I am about to reveal below.

In an accidental death, there are the usual things that a family must do regarding the funeral, etc and of course, a coroner’s report will follow. But in terms of the law, that is it.

Contrast a homicide, where the offender has been apprehended and pleaded not guilty in court. What follows in a case of possible murder under these circumstances are: hearings including appointment of a defence team and a prosecution team and the gathering of evidence by the police followed by a jury trial that may be 12-18 months hence. Does the accused pay anything? Not normally. The defence team is paid by the Government/taxpayer in the form of legal aid, while the prosecution team is paid by the Government through the law firm they work for.

In Australia (at least in some states, and some other countries), reparation as it is called is routinely paid (by the state government) to the families of homicide victims. My understanding is that in Australia reparation is somewhere between $50,000 and $100,000, depending on the state.

This money is necessary because homicide victims’ families have a lot of unexpected expenditure thrust upon them, like accidental death families do.

Reparation or compensation, whatever it is called, is just as necessary in a non-accidental death as it is in an accidental death. It is never enough (if paid) but does help initially. I have heard of some families of homicide victims who have almost been bankrupted following the unexpected and tragic death of a loved family member. There is that much unexpected expenditure that ensues following a murder.

A homicide example is the case of the murder of Sophie Elliott in her bedroom by an ex-partner in January 2008.

The accused admitted he killed her to the arresting police officer (not ‘‘a whodunnit’’ case). There were hearings in Dunedin, a trial 18 months later in Christchurch for a "fair trial" for the accused, at considerable expense for our family and friends, then an appeal in Wellington a year later.

No reparation was ever paid, because it never is in New Zealand in murder cases and yet is readily paid in accident cases.

Do murder victims, therefore, have no value?

The trial for the murderer in this case was almost five weeks long (accused caught in the act), contrast the David Bain trial for five deaths that was about three weeks long (the perpetrator was uncertain). Trial cost to the New Zealand taxpayer in the Weatherston case was $440,000, Appeal cost to the New Zealand taxpayer; $40,000. Incarceration costs, around $100,000 per annum.

Reparation to the family = ZERO. Victim Support offered some help. Cost to the murderer, loss of freedom.

Neither a company, business nor the state was negligent as regards the death of Sophie Elliot. They did not allow her murderer to enter her home and her bedroom. This was a terrible crime but sometimes we all have to wear things that hurt and not expect the government and tax payer to compensate us for this. The murderer is the one who should make reparations, not the state.