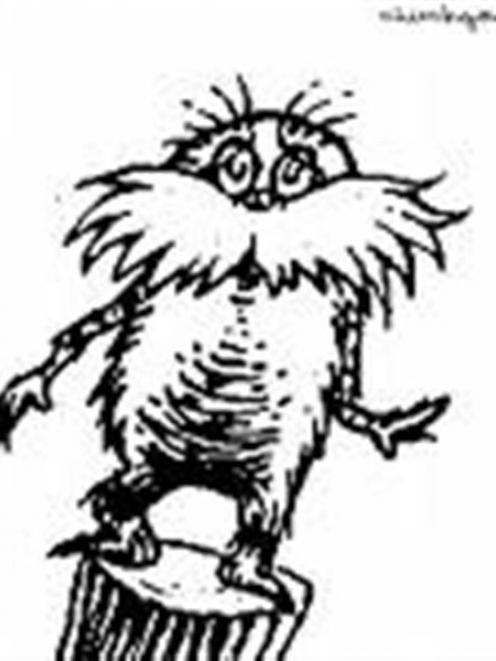 Murray Grimwood takes inspiration from a creation of the celebrated Dr Seuss to warn of the rapidly encroaching dangers of environmental degradation.

Theodor Geisel was one of the most insightful authors of all time.

He is better known, of course, as Dr Seuss, and ever the most green of them all has to be his 1970 offering, The Lorax.

The story chronicles the activities of an entrepreneur named aptly - the "Onceler".

He arrives in a spot where there are "Truffula trees, mile after mile in the fresh morning breeze", and where bears, birds and fish (or at least, their Seuss equivalents), all live untrammelled, unimpacted, unstressed lives.

In other words, a pristine environment.

He proceeds to chop down a tree, make a consumer product from it, and flog it off.

From the tree stump appears a smallish, brownish, mossy type man, who berates the Onceler, but is told to shut up.

We have met the Lorax.

The story goes on to document the impacts of the Onceler's expanding operation, as the place is gradually rendered unliveable for wildlife. Every step of the way, the Lorax berates, defends and warns.

Every step of the way, he is berated, attacked, and ignored.

Finally, the last tree falls, the redundant workers leave, and nothing is left living under the "smoke smuggered stars". You get the picture.

The Onceler failed to address the true cost of the resource he was using, failed to understand that exponential growth is neither a straight-line graph nor sustainable, failed even to attempt compensation or mitigation. There are important lessons here.

The Onceler should only have been allowed to chop trees on a replacement-programme basis.

A bottom-line figure on his water use (and discharge quality) should have been established, one which guaranteed all existing flora and fauna no debilitating impact.

The most important lesson though, is the appraisal-in-hindsight of social interactions: the Lorax could only fight a rearguard action, so ultimately the only question about his stand was "how long"?

The Onceler was only interested in "biggering" his money, and failed to put a dollar figure on the pristine nature of the environment, the real cost of the trees, or on the impact on the poor old bears, birds and fish.

Both lost, or more accurately, all lost.

Let us apply this to the RMA.

There is pressure to make money from what appear to be free resources - fish, trees, land, minerals, water.

Human nature being what it is, those who extract would prefer to avoid the costs of compensation, mitigation and rehabilitation.

Those should in turn be addressed by rules, caps, quotas, limits and outright vetoes, set as national and local standards.

There should be two parts to establishing those standards, one being that you must rely on science.

The other is more important; if the science is as yet unclear, you must err on the side of caution, and not indulge the action.

Put that another way - if we have to wait until a species is extinct to prove that it was going to be so, I suggest we have not progressed much past the illogic of witch-dunking.

Let me give you a current example, the Hectors dolphin.

Endangered, and nationally recognised as such.

Commercial fishermen go to court saying that they will lose dollars if they cannot use set-nets.

They argue that the case for set-nets being responsible for dolphin deaths (they who have to breathe at the surface every two minutes, or drown) has not been proven.

The science is there - enough to raise doubt level to at least probable, but who actually defends the Hectors dolphins? Given that they face execution, should they get legal aid? A defence counsel and a chance to brief same? An adequately-funded government department to champion their cause? They get the Ministry of Fisheries (if I were a dolphin, I would be extremely uneasy about relying on a commercial regulator for my survival) and a bunch of - essentially volunteer - Loraxes.

The actions of whom can only be rearguard, as we have established. Bigger picture, local councils and currently central government are not neutral arbiters.

Power, ego, kudos, all make for a pro-development bias.

A classic example is the ETS, where our representatives have equivocated their way past a fart tax, been lobbied-to for delay, been complained-to about cost, and do not want it to impact economic growth.

The actual CO2 change they have achieved to date, is nil.

If and when the Loraxes get to the Environment Court, they still face an uphill battle.

The Lorax types typically have to meet somewhere after hours, do the legal legwork themselves, and fund a front-person on the day.

All they can expect from councils and departments, is a kick for touch.

Worse, there is a thing called an expert witness, upon whose evidence the court will typically place greater weight, and who will inevitably come from the game in question.

If the game is a small, tight-knit one (like dam-building, power-transmission, ports or mining) the instinct for the expert witness will be to avoid damaging career-path options within the industry. Which is why we see less of them going in to bat on the Lorax side.

Ultimately, there should be no need for a Lorax.

The formal systems and personnel should be in place to set the limits, caps and vetoes, but one look at the saga of US Supreme Court appointments tells us that it requires more - it requires a mature society.

The current Nick Smith initiative to speed up processes flies in the face of the caution approach which must apply to all no-way-back applications, and isn't that all of them? The next phase will be interesting; where caps (like fishing quota) are put on everything.

Finite limits in a finite world.

There will be a lot of unrequited, well-funded angst out there. We know the Oncelers will live to regret their actions.

We know the Lorax types can only slow the degradation, buying time until that social maturity happens.

Dr Seuss, of course, saw it, understood it, and clearly presented it way back in 1970.

It was pitched at entry-level, too - pity some of us are such slow learners.

Murray Grimwood is a Waitati farmer and occasional commentator on environmental issues.