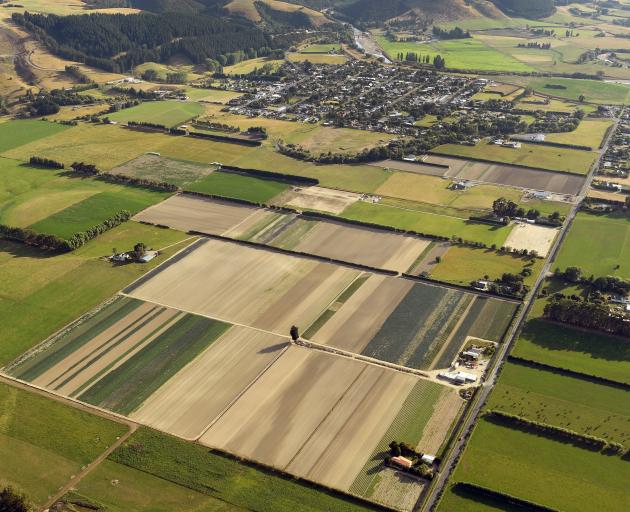 Elite soils, like those on this market garden near Outram, need to be protected from development. PHOTO: ODT FILES
Elite soil is a disappearing priceless national asset, writes  Selva Selvarajah.

During the unprecedented and unexpected Covid-19 crisis, the supermarkets and our supply chains have served us well with an ample supply of fruits and vegetables.

Who produces our fruits and vegetables? Our horticultural farming sector, which employs more than 60,000 workers.

Our diverse diet preferences and mushrooming bright ideas on food production and resilience continue to ignore the threats to our horticultural industry. Leaving the diminishing irrigation water availability and the increasing environmental restrictions and demand for workforce aside, the declining access to land resources, particularly high-class soils has been cancerous, because high quality horticultural production demands high-class soils.

Soils as such contain much greater and diverse micro-organisms than water. Soils are living matters and not dirt as some of us call them.

High-class soils are more special. They are nature's geological marvels with excellent physical and chemical properties conducive to high yield and quality. The unique ability of such soils to support diverse crops earned ‘‘versatile soils’’ status and the complimentary term ‘‘elite soils’' because they occupy only 5% of our land (1.34million ha). Most such soils are in flat or gently rolling landscapes.

Where do we find these magic soils?

The Canterbury, Waikato, Taranaki and Manawatu-Whanganui regions are gifted with more than 70% of our elite soils, while Otago has a meagre 3.6% and the carrot-growing Southland region 12.4%.

Even if the entirety of Otago's elite soils are utilised to grow the local fruits and vegetables, the regional residents' (4.8% of our national population) and the tourists' demand can outstrip supply, leaving local resilience on the back foot. The West Coast drew the short straw with no such soils and has been at the mercy of other regions for produce.

Lifestyle blocks are the next enemy. Much of the 187,000ha in lifestyle blocks is non-productive, which occupies 13.5% of our elite soils. Elite soils are lifelines for our horticultural industry with typically high revenues which use large work forces.

For example, the gross revenues from potatoes and pip fruit are $28,000 and $45,000 per hectare respectively.

Given the rarity and the proximity to urban areas, the district-based trade-off of these disproportionately distributed elite soils to housing could impact our whole nation's self-sufficiency in fruits and vegetables, income, export and job opportunities.

With many housing and infrastructure shovel-ready projects waiting to bypass the normal RMA process, it is highly likely the assault on our versatile soils will continue unless the appointed panels decline such projects.

The Auckland region — which lost 10,080ha of prime land between 1975 and 2012, and has partial control over the market gardening capital Pukekohe — has the potential to smother another 6010ha of our prime land with concrete and tarmac in the immediate future.

We are a peculiar nation with a history of depreciating our strategic natural assets and advantages with the ‘‘she'll be right’’ culture of reacting too slowly to risks and threats. We scarified 70% of our native flora and 90% of our wetlands before beginning protection.

We are yet to recognise our nationally outstanding freshwater bodies and landscapes. It has taken 23 years for an inadequate national direction on freshwater management since the Resource Management Act (RMA) was enacted in 1991. Does the RMA safeguard our elite soils?

The RMA is toothless in sustaining our highly productive land. Despite the fact our horticultural industry is underpinned by our unique soils, there are no powers to control the use and protect our prime land from fractionation and urbanisation. Unlike degraded water quality which can be restored, the loss of each hectare of our elite soils is irreversible, like our diminishing endangered native animal species.

The good news is that at last, last year, central government proposed the first national policies on highly productive land after 29 years of the RMA.

The proposed national policy statement articulates elegantly and correctly, ‘‘Our land is a precious taonga — an irreplaceable treasure and a source of life and wellness for our country. Our economy depends on our land, and our history and culture are tied to it’’.

The bad news is the most crucial policy proposed is incompatible with those sentiments.

The window-dressing proposal warrants costly regional and district plan changes which are unlikely to protect the remaining soils.

It wilfully permits relinquishing our versatile soils for inappropriate subdivisions and infrastructure development, promoting the steady carving of our significant natural features thus stealing from our future generations for short-term gains.

I hope you are now convinced our elite soils are national assets and deserve full protection rather than being traded off cheaply and regularly for housing and roading. We have generous land parcels with poor productivity for large-scale housing which may not be within the immediate reach of the existing infrastructure or housing areas.

If we wish to safeguard the unique soil remnants for our future generations, it is not too late to urbanise less productive land despite the short-term additional infrastructure cost.

Our versatile soils which possess untapped potential to supply high quality diverse and novel produces for our rapidly changing dietary requirements are priceless gifts to our future generations, hence worth retaining at any cost.

Are any new housing projects likely to drain off our wetland remnants or destroy our national parks? The answer is no. If so, why treat the endangered elite soils any differently?

The only viable options for our Government are to ditch the proposed highly productive land policies and accord full protection status for elite soils by national environmental standards or other regulations.

Such a move will save millions on ratepayer funded costly plan changes, horticultural jobs and export revenues and keep our horticultural imports in check.

■Dr Selva Selvarajah is the founder of Enviroknowledge Ltd which trains environmental professionals.

"In 2016, we consumed $2.1billion worth of our own fruits and vegetables and exported $3.1billion worth. We consume more than 90% of our vegetables produced in New Zealand."
"The Canterbury, Waikato, Taranaki and Manawatu-Whanganui regions are gifted with more than 70% of our elite soils, while Otago has a meagre 3.6% and the carrot-growing Southland region 12.4%."
"Even if the entirety of Otago's elite soils are utilised to grow the local fruits and vegetables, the regional residents' (4.8% of our national population) and the tourists' demand can outstrip supply"
Wow, I didn't know that !!!
I see Outram is nearly all dairy now. Makes me wonder what the forces are stopped it being our market gardening area. What is it that stops it from being a major employer and exporter of veg.
The netherlands is the size of Canterbury but is the second largest exporter of food by value in the world, second only to the US.
Why can't we be like that ????