Following months of warmer-than-average temperatures, parts of Otago and Southland just got their first taste of "normal" June weather.

Tara Hills (near Omarama) was the only location where temperatures were below average. 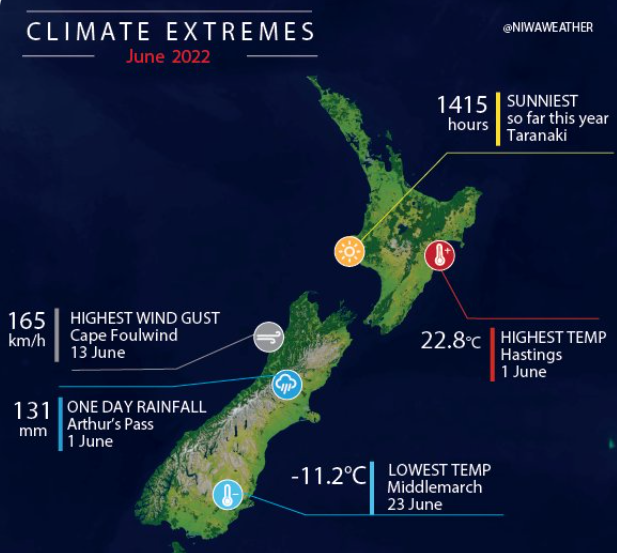 The lowest temperature of the month for the whole country was -11.2degC, observed at Middlemarch on June 23.

Tauranga was the wettest & sunniest centre, while Dunedin was the driest & least sunny 🧐

🌞 Taranaki remains the sunniest region so far this year.https://t.co/rcxSGxpeOi pic.twitter.com/Gsa9KqwM2r

Rainfall and soil moisture levels were at opposite ends of the scale for the southern region.

"It was especially wet in inland parts of Otago and Canterbury, where rainfall totals observed were approximately double the June average, respectively.

"By the end of June, soils were significantly drier than normal for eastern parts of Otago and Canterbury, from Balclutha north to Banks Peninsula.

"This pattern is consistent with the northwesterly air flow anomaly observed."

One is likely on Friday, another possible on Monday & more possible later next week.

The theme will be wetter than normal conditions (🟢) with the potential for flooding 🌊 pic.twitter.com/bGzYLEn8CX

Several new records were set in the southern region during June.

At the other end of the scale, Dunedin Airport recorded its lowest June temperature (-8.6degC) on June 23, and Middlemarch recorded its second-lowest (-11.2degC) on the same day.

Mr Macara said the Tasman Sea and Southern Ocean were particularly unsettled with numerous strong low-pressure systems and fronts, especially during the first half of the month.

"The prevalence of these air flows, and ongoing warmer than average sea surface temperatures, meant it was a warm start to winter for most of the country."

But parts of Otago and Southland received heavy snowfall in mid-June, followed by a prolonged spell of cold days and nights associated with high atmospheric pressure.

Overall, the nationwide average temperature in June 2022 was 9.9degC, making it the eighth-warmest June since records began in 1909.