Stormwater outlet Andersons Bay Inlet. Photo: Stephen Jaquiery
More than $160 million has been earmarked for southern councils as the Government announced a $2.5 billion support package for its planned overhaul of water services today.

Today, Prime Minister Jacinda Ardern said the reforms were designed to benefit New Zealanders no matter where they were in the country.

And the support package was designed to make sure no council was worse off despite the change to their asset base.

To ensure that, $500million of the $2.5billion support package would be used to help councils transition into new roles, as local government bodies that no longer provided water services for ratepayers.

The remaining $2 billion was compensation for the loss of assets from councils’ books and to ‘‘invest in the future", Ms Ardern said.

“New Zealand’s water systems are facing a significant crisis and will continue to do so without major transformation,’’ she said.

Dunedin Mayor Aaron Hawkins said the case for change in water service delivery had been made at a national level, but the real question for local councils, and their communities, is whether it stacked up locally.

There were still big questions about how the four proposed water service providers would "give effect to local aspirations, and how they would be be held accountable locally".

"We have been told all the way through that once the detail has been nailed down, we’ll be able to have that kōrero with our community. What that looks like exactly remains to be seen," Mr Hawkins said.

"Until we see what that final picture looks like, and get feedback on that from our community, it’s impossible to make a call on whether it stacks up." 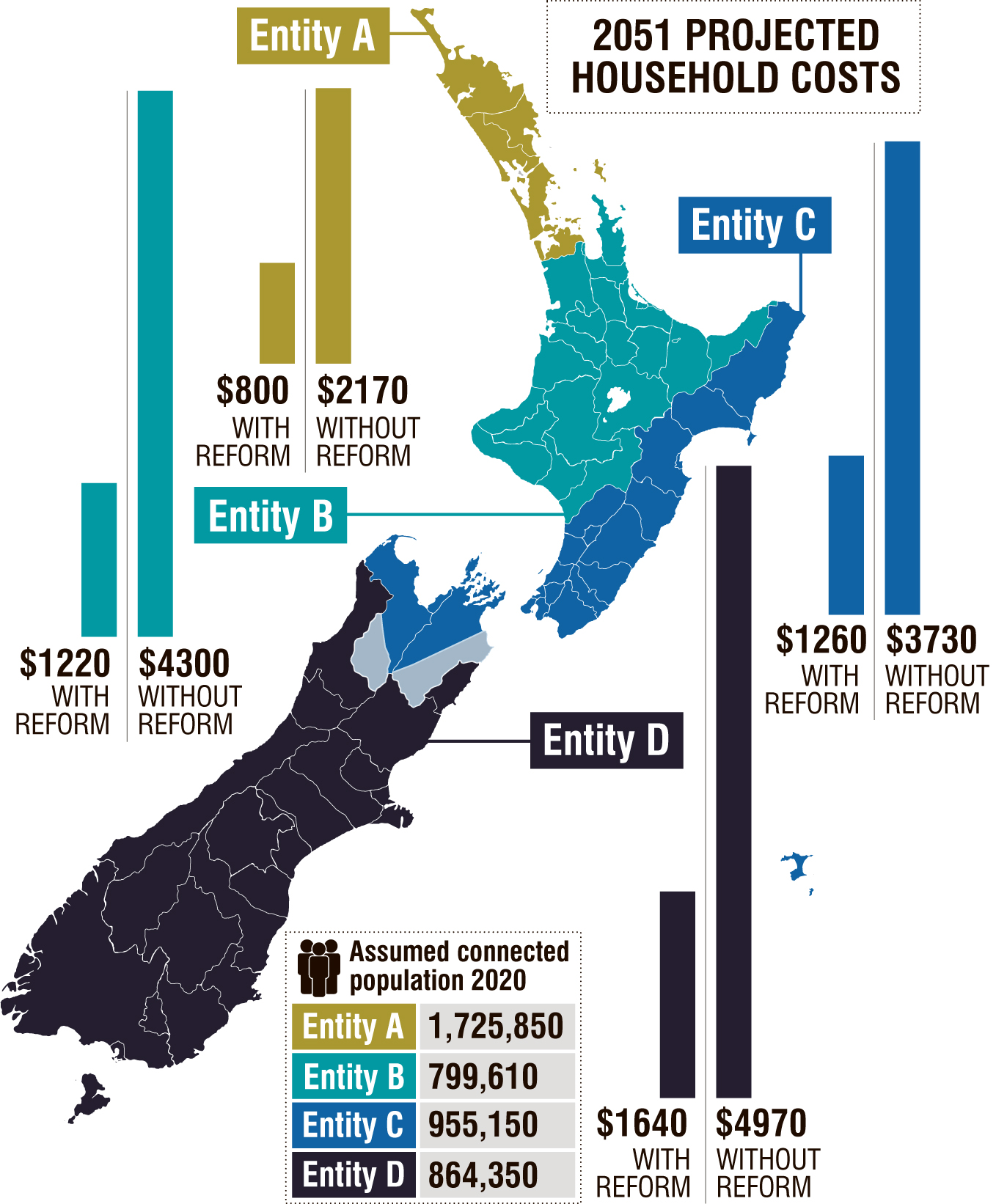 But she said the reforms offered an opportunity for Government and local councils to work together to ensure the reforms were fit for purpose.

The Government signed a commitment to work with LGNZ to engage and consult with councils and other stakeholders over the next six to eight weeks.

“The reforms are about acting for the greater good, with significant benefits to all communities. But they will have the best chance of success if all councils participate," Ms Mahuta said.

"We are working with the sector to ensure everyone understands the reform-related information, and to explain the policy proposals, the benefits of reform, and the details of the support package.

“All of our water assets will be retained in local ownership; that has been a bottom line for us."

There was a public referendum provision to provide the ultimate protection against privatisation.

There would also be mechanisms to ensure a strong community say in how the assets and services are run and how planning will be managed.

The $500 million component of the support package sought to address the costs and financial impacts that councils would incur such as the transfer of water assets, liabilities, revenue and staff to a new water services entity.

The funding also ensured councils would be able to continue to sustainably perform their non-water related roles and functions.

The larger portion of the support package, which comprises $1 billion Crown funding and $1 billion from the new water services entities was allocated to councils on the basis of a nationally consistent formula, based on population, relative deprivation and land area, she said.

The funding package announced today comes on top of the $761 million committed to the reform programme in 2020, and $296 million announced in Budget 2021 for the costs involved with the establishment and transition of the new water entities.

Across New Zealand an up to $185 billion investment over the next 30 years is expected to be required to maintain, replace and upgrade ageing assets, and to provide for growth, she said.

Meanwhile, Leader of the Opposition Judith Collins called the support package a bribe for councils to accept reforms that would result in "low accountability, bloated service entities, more bureaucracy, and messy cross-subsidising between neighbouring regions".

“National has been vocal in proposing central government investment in council infrastructure, however, our approach would be to tie this to requirements for councils to build housing," she said.

“The Government has simply created a slush fund to buy compliance from local governments.

We had an election last October and this significant issue was not debated and I can't recall any mention of it whatsoever.

This government couldnt deliver a baby let alone a transformational review of 3waters. Be aware, this will cost consumers.

If one had a conspiracy bent to their thinking, they would almost see this is a bribe. How fortunate we are all so grounded to see that this is NOT a bribe.

Can someone show the science besides the projected costs figures? It looks like they are taken from thin air.
I wonder if during electricity reform in 1970s there were similar pamphlets claiming power bill savings.

You're dreaming.
If you think those dollars and cents will come close to the cost of the assets. A redistribution of our rates to bring backyard plant up to date with the costs to us is what's happening here. Any ratepayer funded infrastructure given to the government (remember when we had our own power generation at Waipori?) cannot be adequately monitored, maintained and controlled from afar. Why stop at three waters if that's the case.

Did anyone bother to ask the ratepayers and tax payers what we want done with the assets we contribute to every quarter and the tax money that is being doled out as a 'sweetner'. I for one am not convinced this move is in our best interest.