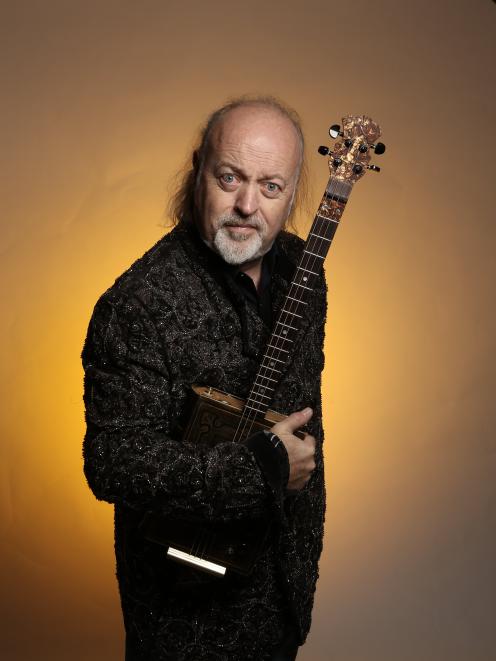 No stranger to the South ... Bill Bailey will bring his new show, En Route To Normal, to Invercargill and Dunedin next month. PHOTO: SUPPLIED
Likening himself to a dog with zoomies, internationally known comedian, musician and actor Bill Bailey is set to hit Southern stages next month. Laura Smith spoke to Bailey on day three of his managed isolation.

To be in New Zealand is a blessed relief, Bill Bailey says.

Even managed isolation has been pleasant, the United Kingdom comedian suggests.

He has kept busy speaking to media about his upcoming tour, and doing dance, fitness and gym sessions, all via Zoom.

He said it was no real hardship spending his time in the hotel, and staff there had been amazingly friendly and supportive.

"Honestly, it’s a testament to how well New Zealanders dealt with the whole pandemic."

There was a marked contrast with how it was in the UK, he said.

"The utter shambles in the UK, with this blithering toxic hay-bale Boris, and his useless shower of incompetence. How they’ve stuffed it up so royally is beyond belief."

To be in New Zealand was a blessed relief.

A frequent visitor to New Zealand’s shores, Bailey was looking forward to performing once more.

Stopping when the pandemic hit had been devastating, he said.

The live arts in the UK had been struggling, and while he had attempted to perform Zoom gigs, it did not work well for him.

The option of performing without an audience had brought home to him how comedy was a two-way artform.

And so, he had chosen to craft a show which, among other things, mused on the effects of Covid-19.

En Route To Normal would tour 12 cities, starting on March 13 in Wellington.

From there, he would head south to perform in Invercargill, at the Civic Theatre on March 16 and then Dunedin, at the town hall on March 17.

When asked about his previous experiences in the deep South, Bailey said they had been good.

Dunedin was one of the first New Zealand centres he performed in outside Auckland.

On tour with American comedian Rich Hall, the pair were facing an empty venue ten minutes before showtime.

An argument ensued about who would perform first.

As for Invercargill, he found a new love.

"I was so taken by the place I wrote a song about it."

His first trip to the Southern city had included a coastal tour, which involved seeing some of the local wildlife.

"I just love the wild places ... this is the perfect place for me."

He enjoyed visiting places on the edge of things, he said.

"On coastlines, or the southernmost or northernmost. That year I went to Invercargill, I had done a show in the Arctic Circle ... I looked it up, it’s the most northerly and most southerly gig on the planet. I managed to fit them in one year."

"It’s brought about by the energy of the audience. That’s why I find it so hard to do gigs online, not getting that energy or tension you get in a crowd."

He would feed off that atmosphere in his upcoming shows.

"This is something that has been denied to me now for a year, I have no idea what’s going to happen. I might go completely, totally bananas."

It was the longest he had gone without doing a live show in the past 20 years, he said.

His show covered topics such as people’s reliance on technology, which featured ’90s house music based on the Skype call song.

Music, a key element of his shows, was something he had been thinking about a lot during lockdown.

"What is music, where does music come from? Who was the first person to write something down?"

He incorporated his music to mix up the dynamic of his shows; the intellectual or cerebral side of comedy combined well with the subconscious effect of music, he said.