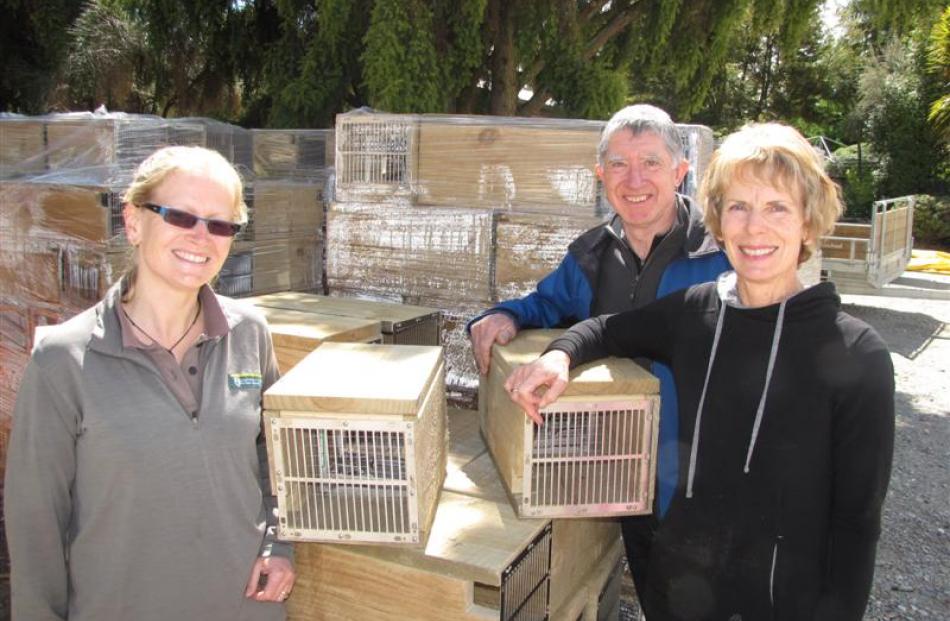 Matukituki Charitable Trust founders Derek and Gillian Crombie (right), and Department of Conservation biodiversity ranger Flo Gaud, with more than 250 traps which will be installed in the West Matukituki Valley this summer. Photo by Lucy Ibbotson.

Derek and Gillian Crombie's work with the Matukituki Charitable Trust is aimed at aiding the preservation and rehabilitation of native birds and wildlife in the West Matukituki Valley, within Mt Aspiring National Park, by means of predator control. Their long-term commitment to the project has been recognised as a finalist in the Inland Otago Conservation Awards.

What is it about the project you are involved in that got you both interested in conservation and drives your work?

We have been visiting the valley for over 30 years and in the last 10 we realised the number of kea was declining rapidly. When we discussed this with Doc it became apparent that most species were in similar decline and Doc did not have the resources to address the issue without more support. We decided we had to do something to ensure future generations could experience the valley as we had.

How does the project you're involved in benefit conservation?

The main strategy we have is to start with predator control in the upper West Matukituki and then hopefully extend the area to join into other groups that are doing similar work in East Matukituki and the lower valley down to Lake Wanaka. The upper valley has a natural barrier to reinvasion and along with good predator control should create an ''island sanctuary'' where wildlife can develop and spread to the lower valley.

What do you both get out of your work in conservation?

We have really enjoyed meeting a wide range of people, including Doc staff across New Zealand, who share similar aspirations and commitment, but the main objective is to ''make a difference'' and see the results of our efforts achieve the reintroduction of lost species and hopefully kiwi back in the valley.

What challenges has the project faced and how have they been overcome?

The biggest hurdle was establishing the Matukituki Charitable Trust as an organisation that would be secure for the long term and then finding the funding to start the project.

We had a lot of assistance from other similar organisations which provided material and documents that we could use to get the trust set up legally. In reality the support we have had from Doc, volunteers and sponsors has made the task easy, but we did have to provide a reasonable amount of funding and effort ourselves. The initial support of foundation volunteers and sponsors was critical to reach the stage where we were able to apply to the Doc Community Conservation Partnership Fund to meet some of the costs for the first two years' work. This funding will meet about half the cost of installing all the 700 traps required to reduce the population of rats, stoats, ferrets and possum. This is a massive start for the trust, and the valley, and with back-up from our volunteers to maintain the traps we hope to have predators to very low levels within two years.

What direction do you see your conservation work going in the future?

Our focus for the first three years will be to install and maintain a network of 700 traps. Once that is stable we will extend the trapping to specific areas such as the alpine zone where rock wren and kea nest. We will then be focused on monitoring existing species and reintroduction of species such as weka, mohua, and hopefully kiwi. Our aim then will be to ensure visitors to the valley have the opportunity to see these birds around the public access areas like Rob Roy Valley and Aspiring Hut as well as the two high school lodges. This is a 10-year project. We hope we can help others adopt similar schemes in other areas so Aspiring Park is returned to its best.