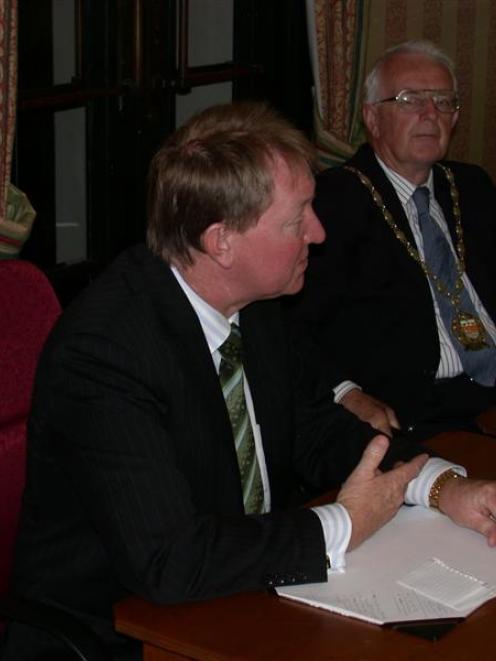 Minister for the Environment Nick Smith (left) gives his views on the future of Environment Canterbury to Waitaki Mayor Alex Familton (right) and the Waitaki District Council in Oamaru yesterday. Photo by David Bruce.
The Government is unlikely to fully implement a report which recommends sacking the elected Environment Canterbury regional council, replacing it with commissioners and splitting water management from the other functions of the regional council.

Minister for the Environment Nick Smith, in Oamaru yesterday, said decisions on the future of Environment Canterbury (ECan) needed to be made urgently -"within weeks rather than months" - but may not be as drastic as recommendations in a report the Government requested from a review panel.

He indicated he was unlikely to fully accept all recommendations from the review panel, chaired by former Cabinet minister Wyatt Creech.

The reports recommendations included establishing a separate authority to manage fresh water in Canterbury and ECan continuing with other regional functions.

The Creech report was highly critical of ECan, especially its management of about 70% of New Zealand's fresh water.

Dr Smith yesterday started a tour of the 10 district and city councils in Canterbury with a briefing of the Waitaki District Council.

He has met the 10 mayors, but wants councils' views.

"Finally, it is the Government who will have to make the call," he said.

• "Some sort of agreement" with ECan to ensure the issues raised in the report were sorted, but he wondered whether that was enough.

• Using his powers under the Resource Management Act (RMA) to appoint commissioners to run ECan RMA functions - a disadvantage is that would require two separate organisations of elected councillors and commissioners.

• Replacing the elected council with commissioners, with a clear mandate to sort out the most urgent issues.

• Fully implementing the report's recommendations, which included replacing the council with commissioners while water management functions were removed to a Canterbury Water Management Authority, with ECan retaining other functions.

There was "a very high threshold" for the Government to intervene in local government.

If it did not, "we will be back here within a decade, no further ahead".

However, he personally favoured some sort of middle ground to resolve the urgent issues.

He doubted a separate authority to manage water within the Canterbury region could be justified, with ECan retaining other regional functions.

One example he used was separating water use from land use, both of which had an impact on issues such as water quality.

"If we take away water functions, what is left that we can justify a further [local government] body?"Waitaki councillors all agreed something needed to be done urgently.

Cr Struan Munro, who has dealt with ECan as a councillor and privately as an Otematata farmer, said the big concern for the Waitaki district was the length of time taken to deal with resource consent applications for water, and the cost of those.

Cr Alistair Mavor said the issue was "entirely water", along with a lack of rural representation - and Waitaki in particular - on the regional council.

Waitaki Mayor Alex Familton said there were urgent problems with ECan that must be addressed, which required that the Government stepped in.

His council supported urgent action by the Government to whatever level was deemed necessary.