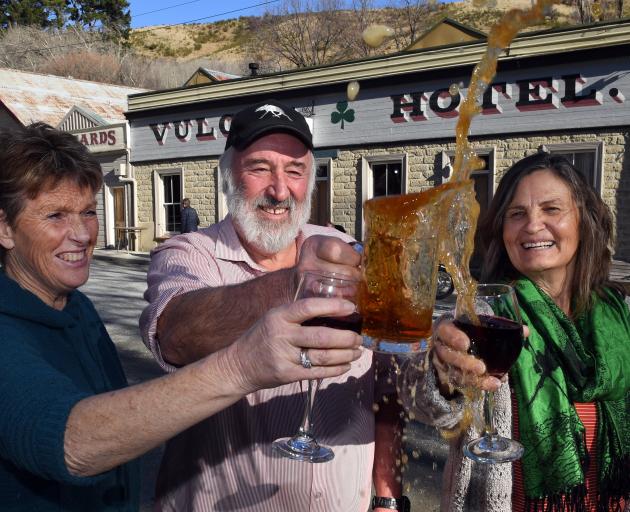 Vulcan Hotel manager Sue Ingram and new owners Gerry and Denise and Shaw celebrate the transition of the landmark hotel to new ownership. PHOTO: STEPHEN JAQUIERY
The wandering spirit in one of New Zealand’s most famous watering holes can rest a little easier with news her home is in good hands.

The Vulcan Hotel is off the market, providing stability for its ghost, "The Rose", and for the wider St Bathans community.

The Rose, a prostitute who plied her trade from room one of the hotel but also travelled for business to other rooms and beyond, had seen a lot in her time but nothing like 2020 when The Vulcan briefly closed, for the first time in its history, as a result of a business deal gone sour.

Royce Clark, a Canterbury electrician, was one of six shareholders in the building since 2011, and he got the hotel running again — always with a view to sell it.

On May 3, the deal was sealed and new owners Gerry and Denise Shaw were handed the keys to the 1882 mudbrick hotel, built at the height of Otago’s gold rush, after paying $530,000.

A month on, Mr and Mrs Shaw are still learning tales of its ghostly presence.

Sue Ingram was installed as manager and had worked at the hotel "on and off " for 28 years.

The Rose was murdered in room one for the "little bit money and gold she had", Mrs Ingram said.

"The murderer was never found and that’s why she’s still here."

She said she was convinced of her presence.

"You catch glimpses of her out of the corner of your eye. That happens quite often."

Taps would often turn on and off, room one could be icy cold even when there was sunlight streaming in and there were tales of men being pinned down in their beds, Mrs Ingram said.

He had been outside the hotel with a real estate agent when Mrs Ingram approached and asked, "Are you going to buy the place?".

It was a homecoming of sorts for him. His mother was brought up in nearby Cambrian and his cousin owned Cambrian Station.

"I used to holiday on the farm from about age 12."

He was motivated to buy it because he had heard a rumour about it being turned into a holiday home.

"I didn’t want that because it really is the heart of the town."

The couple have also bought the cottage two doors up from the hotel and are "tidying it up" as a base for themselves away from the hotel. That "tidy-up" would also apply to the interior of The Vulcan with only cosmetic changes made, Mr Shaw said.