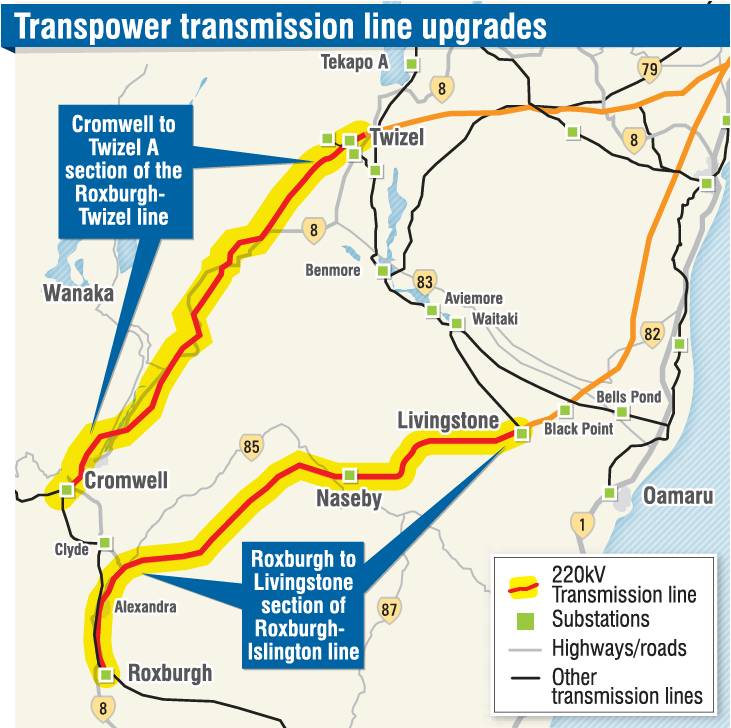 A $100 million upgrade of two of Transpower’s high-voltage lines through Otago is under way, with the biggest job set to begin in January.

The lines run from Roxburgh to Livingstone, near Oamaru (142km), and from Cromwell to Twizel (140km).

They carry about 600MW but will be able to carry 1000MW after the upgrade.

However, the line to Livingstone was a much bigger job, involving the installation of about 850km of new, heavy-duty conductors [lines].

Seven pylon towers would need to be replaced, and 322 of the 434 towers needed their foundations strengthened.

Work on 58 has been completed.

The upgrade will allow Transpower to ship the electricity from the Manapouri power station currently used by Rio Tinto’s Tiwai aluminium smelter north, if and when it closes. Rio Tinto said it could close in August 2021.

The completion date for the upgrade was originally winter 2023. The smelter announcement meant the date was brought forward to May 2022.

Meeting the new completion date meant having more wiring crews, each of up to 65 people, working simultaneously.

Two wiring crews would start the job with a third joining in for the final year, Mr Noble said.

The first part of the upgrade project, completed in 2015-16, involved spending $38million on the lines so they could carry more electricity south to improve the reliability of the power supply to the smelter and Southland in case Manapouri had a dry year.

Mr Noble said upgrading the supply south was a "good option" then.

"I guess you look at it now and go, you could have waited six years and it [the smelter] won’t be there. It’s still a useful thing to have, if you have got the capacity going both ways."

Mr Noble said the Cromwell-Twizel line, with 252 pylon towers, already had quite good capacity but putting more electricity through it — running it "hotter" — meant lines would sag more.

To ensure they remained well clear of the earth, they would be raised where necessary or some earthworks done.

Mr Noble said work on a line between Aviemore and Benmore was part of the original project but a decision to go ahead had not yet been made.

Environment Minister David Parker announced this week fast-tracking the upgrade would be considered by an "expert consenting panel" with a decision in early 2021.

Transpower may establish a "workers village" for up to 100 staff in the Ranfurly, Naseby area.