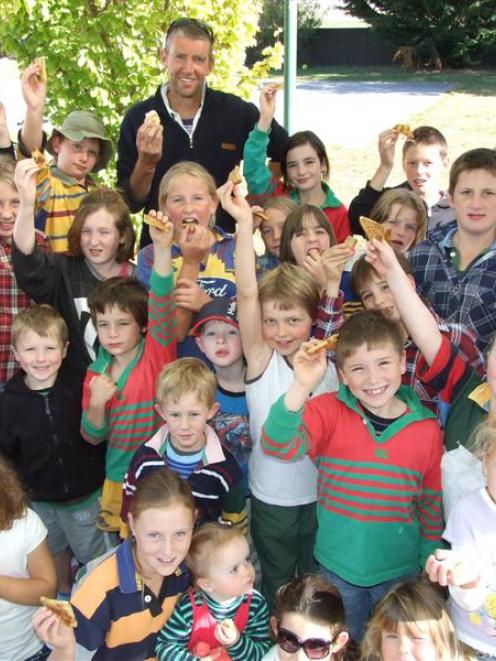 "Just as well my surname wasn't Jones, they'd have struggled to theme a day around that," Sinnamon said.

The 45-year-old multisport athlete and farmer plans to complete the marathon run within 24 hours, starting at Middlemarch and arriving in Clyde by about 11am on Saturday.

His run is a fund-raiser for Sport Central and 13 schools along the trail and throughout Central Otago are involved.

Some will be joining in for part of the journey while others are staging fund-raising activities at their own schools.

Sinnamon has taken part in four multisport events in the past couple of months - the Coast to Coast, the Goldrush, the rail trail duathlon and the Ghost to Ghost.

"So I haven't been training as such for this run, but used those events to get fit, " he said.

"You can't get too hung up about it; this isn't going to be a race."

This will be his longest run both in distance and in time.

The longest time he has spent running has been about four hours.

He occasionally runs from Poolburn to Alexandra, a distance of 35km, and that takes him three hours.

"This trip will be a challenge mentally as well as physically," Sinnamon said.

He will run at about 6-7kmh - "it'll be jogging - not much faster than walking speed".

Sport Central was a good organisation to support and it could use the extra funds to run even more sports events for young people, he said.

He was amazed how the community had rallied behind the idea.

"Running the rail trail is something that's been at the back of my mind for a while. I've done sections of it but never the whole thing in one go."

Rail trail trust chairwoman Daphne Hull said as far as she was aware, nobody had run the complete length of the trail in one go.

The worst-case scenario would be a "howling nor'wester," Sinnamon said.

"I'm planning to finish in under 24 hours if the weather plays the game and nothing goes wrong. Getting used to running slowly will be very difficult."

He was taking a "shearing-gang approach" to sustenance during the journey.

"After two hours, I'll have a bit of a feed, like smoko, and then after four hours a bigger feed and so on."

Hot cross buns, creamed rice, bananas and burgers are all on the menu.

He will have company throughout the trip, with a few extras rostered on during the night.

Poolburn principal Simon Waymouth said schools had rallied to support the cause and the Poolburn pupils were excited about Spice Day.

"His sporting efforts and goal-setting are a great example for our pupils."

Recipes featuring cinnamon had been in the school newsletters for the past month during the build-up to the event.

Sinnamon said it was strange to be greeted by 34 "lookalikes".