By Jared Morgan
0 Comments
A man has been arrested after a 10-hour manhunt sparked by him allegedly pointing a gun at an officer, stealing a police car and a civilian’s car, and leading a pursuit across Otago on Saturday night.

The 38-year-old man was arrested at a Milton property about 10am yesterday after the property was surrounded by police and the armed offenders squad. It followed a search of more than 10 hours in the South Otago town.

Acting southern district commander Acting Superintendent Darryl Sweeney said police teams worked through the night to find the man and he would face a raft of charges.

Police acted on a tip-off from a member of the public, sent the squad and police dog handlers and the man "came out voluntarily".

The saga began near the Lindis Pass about 6.30pm and unfolded rapidly over the next five hours as more police resources were brought in from across the region in a bid to apprehend the man.

"The man failed to stop for police about 6.30pm on Saturday. A pursuit was then initiated and the vehicle came to a stop near Cromwell," Acting Supt Sweeney said.

"The driver of that vehicle presented a firearm at an officer, before taking a police vehicle and fleeing the scene. 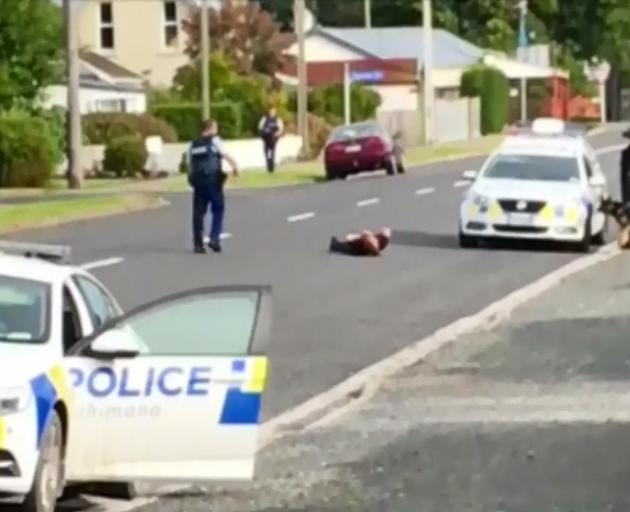 A man was arrested yesterday after a chase around much of Otago. He had allegedly pointed a gun at an officer and took a police car and another car in his attempt to escape. He was arrested at a Milton property at 10am yesterday after it was surrounded by police and the armed offenders squad. PHOTO: ADAM WYBER
"He then travelled towards Alexandra, abandoning the police vehicle and taking a vehicle from a member of the public."

The Otago Daily Times understands no firearm was used in the carjacking.

"The helicopters tracked him a fair bit of the way."

The vehicle the man took was recovered in Milton about 11.45pm, after he fled on foot, Acting Supt Sweeney said.

The officer initially involved had been offered support after the event, and an investigation team had been set up, he said.

As the incident was in its early stages, nine grass fires broke out along about 1km of State Highway 8 between Tarras and Cromwell and eight fire appliances used to contain them.

Firefighters left the scene about 10.30pm.

Acting Supt Sweeney said the fires were "currently not linked" and he did not believe there was any damage to the police vehicle the man took that might have sparked the blazes.

The arrested man was not known for lighting fires, he said.