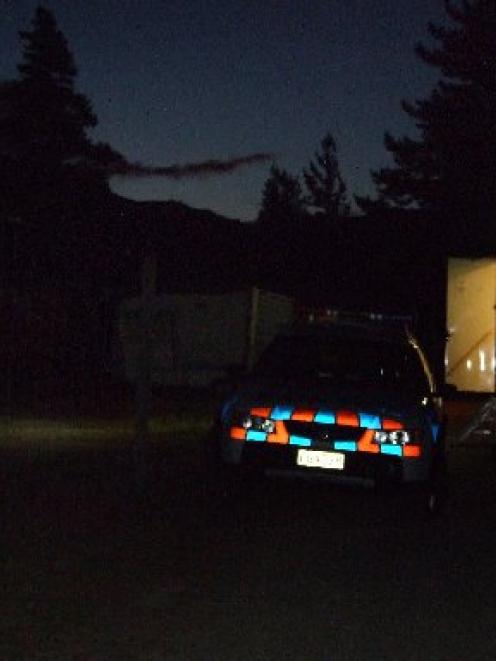 The scene of a police investigation last night after a body was discovered in a Cromwell caravan.
Police were ''unwilling to speculate'' last night whether a man's body found in a stored caravan at Cromwell yesterday was Simon James Garrick, who has been missing for about a year.

Detective Sergeant Derek Shaw, of the Alexandra CIB, second in charge of the investigation, said the death was being treated as ''unexplained''.

The remains had been in the caravan ''for months'' and specialist forensic assistance would be required to identify the body.

''Because of the state of the body, that may take some time,'' Det Sgt Shaw said. Asked if it might be Mr Garrick, he said although the Central Otago man had been missing for about a year, he was unwilling to speculate on the identity of the person in the caravan.

''That's for a number of reasons, including out of respect for the next-of-kin of the person found in the caravan.

''It's too early to comment about the identity, given we haven't entered the caravan yet or begun a scene examination.''

He said a woman from outside Central Otago was checking her caravan about 10.30am yesterday. It had been stored at a Cromwell caravan park. .

''It was the first time she'd checked it for over a year and upon entering the caravan, she found a scene of disarray and what appeared to be the remains of a male person on the floor.''

The caravan had been locked and was stored among hundreds of other stored caravans. It was still locked when she inspected it, he said. She alerted camp staff and police were called.

An Environmental Science and Research team and a forensic pathologist would arrive at the scene today.

''It's a confined scene, within the caravan, but quite complex,'' Det Sgt Shaw said.

''We're treating it as an unexplained death; going through the protocols for homicide but not declaring it as a homicide investigation at this stage.''

At that time, Det Sgt Shaw said he was concerned Mr Garrick had ''met an untimely death'' and a homicide inquiry was launched.

Mr Garrick's Central Otago-based family reported him missing in May this year.

He had not accessed his cellphone, passport or bank accounts for a year.

He usually kept in close contact with his family, but he did not attend his father's funeral in December.

Mr Garrick worked as an excavator driver in Central Otago.