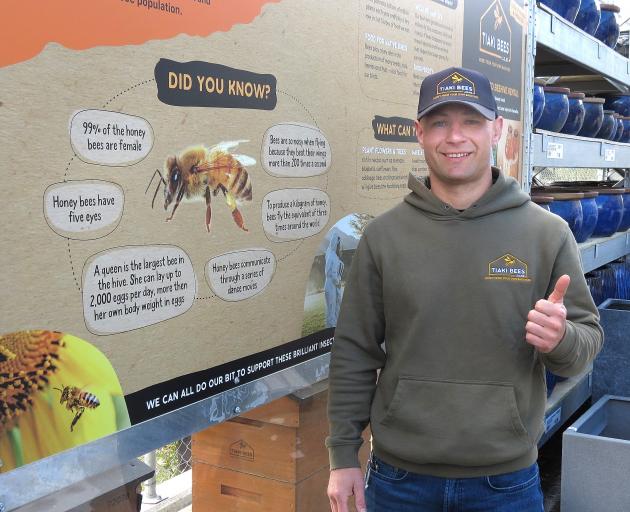 Barna Szocs with his display of working hives at Mitre 10 Mega Wanaka. PHOTOS: JARED MORGAN
A new display at a Wanaka hardware store is creating a buzz with customers.

It is also serving the environment.

Between 20,000 and 60,000 bees per beehive housed in two hives took up residence at the Mitre 10 Mega Wanaka store’s garden centre this week in a New Zealand first.

The bespoke hives are the brainchild of Barna Szocs, who emigrated to New Zealand from his native Hungary a decade ago.

Working for Skydive Wanaka, his love of flight translated to a smaller scale  several years ago when he got first beehive and quickly became hooked.

Since then he  finished a New Zealand qualification in apiculture, read anything and every thing he could find about bees, and steadily grew the number of his hives each year. 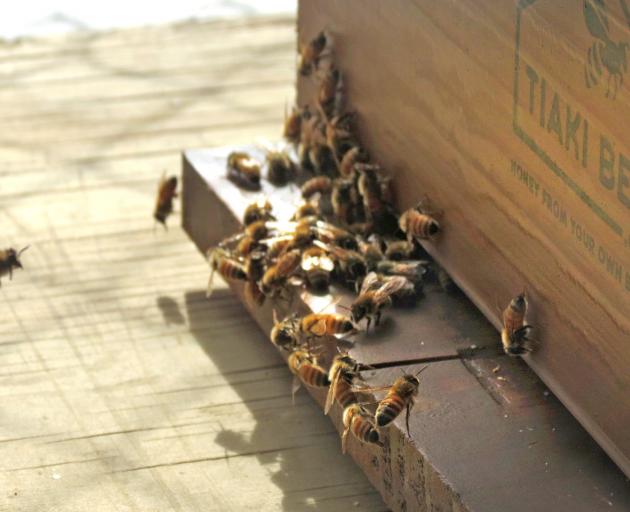 Bees mobilise for work from one of two hives.
He worked for a commercial bee enterprise before that burgeoned into his own business, Tiaki Bees, which he started about a year ago, he said.

‘‘It started growing and people around Wanaka started coming on board.’’ His business has since expanded beyond Wanaka to Queenstown, Cromwell and  Alexandra.

It offers hive rental, and the superfood produce — raw unfiltered honey — is offered back to the customer.

He was less focused on large agricultural crops; his bees were more about pollinating plants and trees on smaller- scale land holdings.

The hives typically stood between one and three boxes depending on the season, and levels were added as honey production ramped up, he said.

The store’s management con tacted him with the idea to set up hives at the store.

Those with allergies to bee stings need not fear: the bees were housed behind clear perspex screens, much like at a zoo.

They were free to come and go from the hives, travelling up to 3km to gather food — pollen and water — and nectar, the latter being the base ingredient of honey, from through the fence that enclosed the garden centre.

Also included was an information board about bees and honey production.

Store manager Mark Watson said hosting the hives was a way of showing global responsibility and citizenship as well as rais ing awareness of the plight of bees and their place in the foodchain.

‘‘We thought putting the bees in a controlled environment would be a great way of educating the public.’’