Cavalcade added to the cycle of life 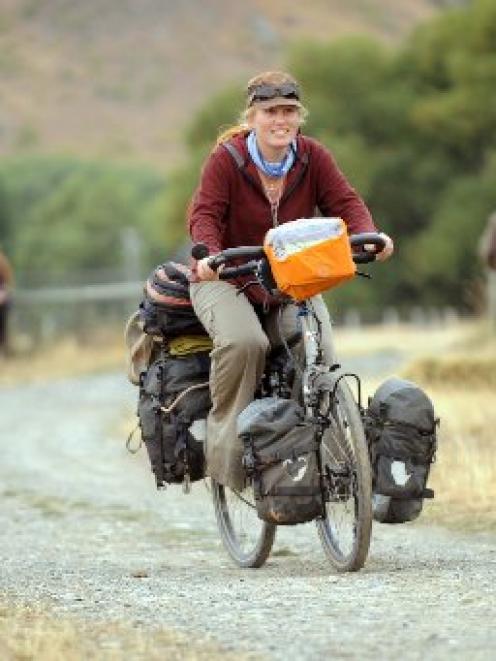 Ms Wouters (32), originally from the Netherlands, has spent the past five years cycling around the world and clocked up 50,000km.

On Saturday, she was staying about 5km down the road from where trail boss Alastair Gibson's trail was gathering at Twin Peaks, near Omarama, when she read about the cavalcade in the newspaper.

Always keen for a new adventure, she cycled over to the trail and asked if she could join them.

Although she was not following the trail on her bike - it was being transported in a horse-float - she had offered to give a hand.

"I'll do whatever. It's nice to be around people," she said.

Since leaving home five years ago in March, Ms Wouters has travelled throughout Europe, Turkey, Iran, Asia and Australia.

The names of the countries were written on her saddle-bags, as people were always curious where she had been.

While in the Northern Territory, she even met Milton Jones, of the television series Keeping Up With The Joneses.

She carried her own tent, sleeping bag, food, computer, stove, "spares for everything", and even a dress.

"I've got too many clothes but you never know when you've got to dress up."

She did leave behind a pair of shiny red high heeled shoes she bought in Australia after discovering she could not walk in heels.

While the countryside was beautiful, it was "the people that make it everywhere" and she enjoyed unexpected adventures, like meeting up with the cavalcade. "It's fun ... to explore," she said.

Ms Wouters is flying back to Australia at the end of April, where she planned to cycle around Queensland. She plans never to stop cycling.