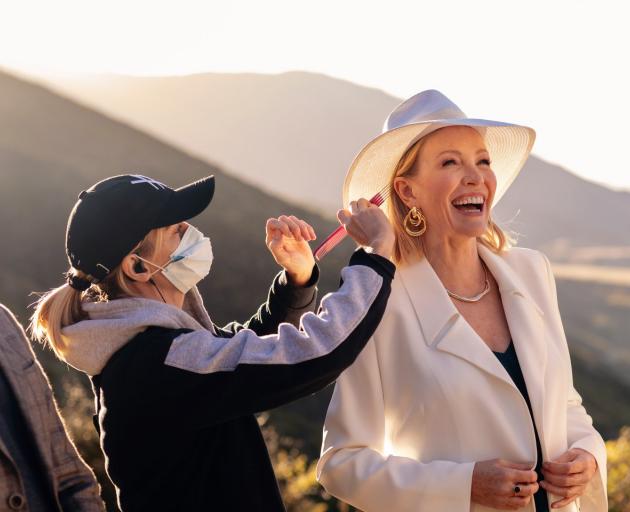 Rebecca Gibney gets ready for her role as Sydney socialite Daisy Munroe in romantic comedy Under the Vines, being filmed in Central Otago. PHOTO: SUPPLIED/DEAN O’GORMAN
Hundreds of Central Otago residents have roles as extras in one of the latest productions being filmed in the district.

The six-part series, Under the Vines, is being filmed in Alexandra, Earnscleugh-Clyde, Gibbston and briefly in Dunedin.

Cast and crew have set up at a Central Otago hall, providing a base close to the set and other locations.

The series stars Rebecca Gibney, who was in Wanted and Packed to the Rafters, and Charles Edwards, who featured in The Crown, The Terror, and Downton Abbey.

AMC Networks streamer Acorn TV has teamed with TVNZ to commission the series.

Producer Carmen Leonard said the cast and crew had loved working and living in the region.

‘‘The friendly locals have welcomed us with open arms, the team are enjoying sampling the wonderful activities and events available in the area and are eternally grateful to be shooting in what is one of the most beautiful places in the world.’’

Leonard has also worked on Outrageous Fortune and The Casketeers.

There are 31 cast members, only one of whom is not from New Zealand.

Only one key crew member is from overseas.

The series follows Edwards and Gibney as two unlikely
city slickers who inherit a failing vineyard in rural New Zealand.

Gibney features as Sydney socialite Daisy Munroe, who heads to New Zealand for a vacation at her recently deceased stepfather’s winery, which she intends to sell.

Little does she know that the vineyard has a co-owner: grumpy British-born lawyer, Louis Oakley (Edwards), who also travels to New Zealand to escape a spiralling series of unfortunate events in his life.

Neither have done a hard day’s work in their lives and both despise the other, but they must somehow make the vineyard successful so they can sell up, split up, and get out of there.