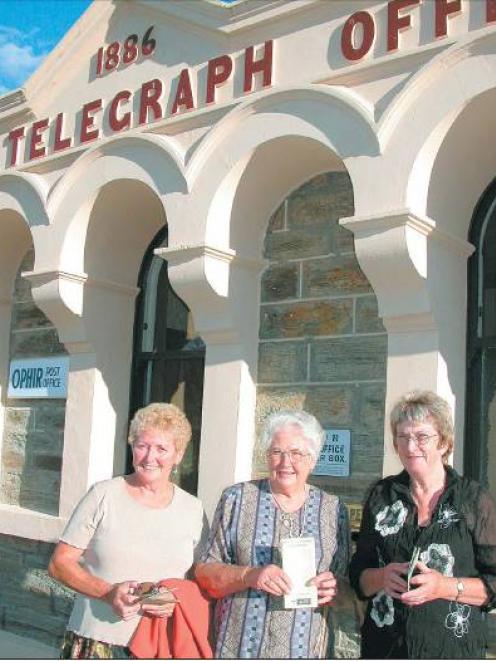 The promotion group held a function in Ophir on Monday to launch four different brochures - three Walk Around pamphlets featuring Ophir, St Bathans and Clyde and another outlining a self-drive heritage tour.

Group president Selar Henderson said some were updated and revamped versions of earlier brochures but all had a print run of 10,000 and were vanishing fast.

‘‘We're already looking at reprints for some and they've been a spectacular success,'' Mr Henderson said.

Promote Dunstan covered Fruitlands, Clyde, the Manuherikia Valley and a ‘‘chunk'' of the Ida Valley.

Central Otago Mayor Malcolm Macpherson said the stories about the region were important to visitors.

‘‘It changes people's appreciation of who we are and what we stand for,'' Dr Macpherson said.

‘‘There can't be a better investment than that.''

Graye Shattky, of St Bathans, said it was rewarding to see the project come to fruition.

‘‘These brochures are a timely reminder of how much we are indebted to the early pioneers,'' Mr Shattky said.

Irene Leask, of Ophir, said travellers would leave the township richer for the knowledge contained in the brochures.

The Clyde booklet had been revamped and reprinted four times, Carole Haig, of Clyde, said.

Promote Dunstan's next project would be a brochure on the Ida and Manuherikia Valleys, with plenty of striking images and details on the attractions of the area.

‘‘All these brochures are a very good example of Promote Dunstan going out into the area and saying ‘Your area is important to us','' Mr Henderson said.

Sisters Mary Blyth, of Alexandra, and Anne Wright, of St Bathans, were among those who helped with the publications.

Mrs Wright did pen and ink drawings for the Ophir and St Bathans brochures, while Mrs Blyth provided the words about St Bathans.

‘‘She sets me these jobs,'' Mrs Blyth joked.

‘‘I took up painting in my later years and I've been doing it for over a decade now,'' Mrs Wright said.

She has opened an art gallery in St Bathans.

Working together on the brochures has prompted the sisters to tackle an even bigger project - a book on St Bathans.

‘‘There were so many reminiscences of early St Bathans' life that we didn't have room for in the brochure,'' Mrs Blyth said.