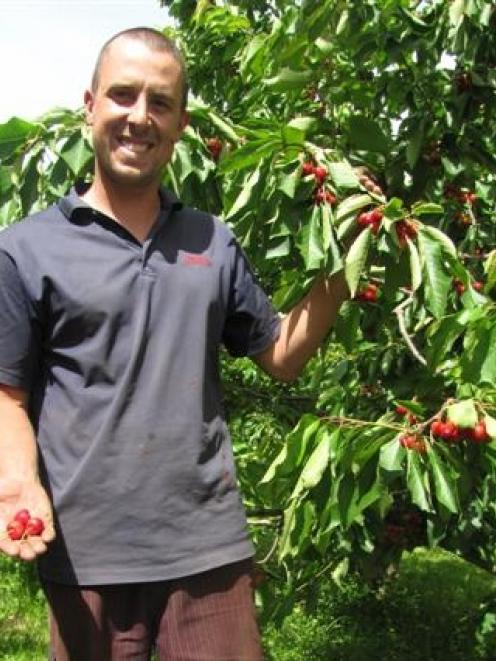 Summerfruit Orchards orchard manager Tim Hope with Sonnet cherries almost ready for picking. Photo by Sarah Marquet.
The first of this season's cherries are on supermarket shelves and growers are getting more money for them than last year.

Cromwell grower and Jackson Orchard partner Mark Jackson said he had been picking early varieties such as Earlise and Burlat and sending them "all over New Zealand", getting "between $10 and $17" a kilogram for them.

He said that was "what we expected at the start of the season" and it was higher than the "under $10" they got last year.

"But that is to do with the massive crops people had ... and the economic climate.

"Most growers had massive crops last year, but not this year.

"Usually when you get a big crop you get a smaller one the next year."

Though crops may be smaller than last year, Mr Jackson and Summerfruit New Zealand chairman Gary Bennetts both said there would still be "plenty" of cherries around for christmas.

Mr Jackson said the fruit was usually ready earlier in Cromwell and other growers in the region seemed to concentrate on export varieties leading to a "market advantage" for his early varieties.

He expected to start picking for export next week when the "harder varieties" would be ready.

Mr Bennetts, also a Roxburgh-based grower, said he would begin picking for export in a couple of weeks but the bulk of the picking would be done after Christmas.

He said he would harvest some for the local market before Christmas "but not much" as most of his cherries were later varieties, grown for overseas markets.

The fruit was about a week later this year than last due mostly to cooler weather, the men said..

"It was a tricky spring weather wise; it was cold and windy," Mr Nicholls said.

The men agreed the recent high rainfall had been good for their crops.

"The rain is good for cherries. If anything, it's keeping the moisture in the soil," Mr Bennetts said.

However, now that the fruit had developed, they were hoping there wouldn't be much rain until the cherries were harvested as it would cause the fruit to split.

"We don't want any for the next eight weeks," Mr Nicholls said.