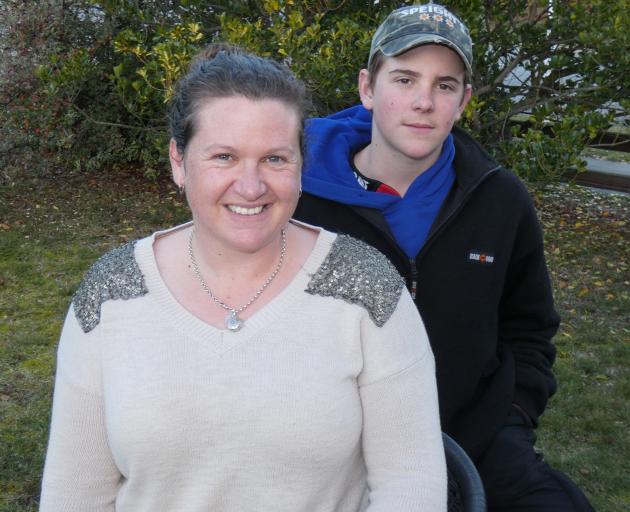 Kristy Velenski and her son James Ensor-Velenski (16), of Clyde, are happy his concussion has subsided after a year of challenges. Photo: Simon Henderson

A Central Otago teenager is speaking out about the importance of safety on the sports field after an injury sent him on a year-long journey of recovery. Simon Henderson finds out about the complexities of concussion and recommended best practice.

The challenge of concussion has been a year of pain for 16-year­old James Ensor-Velenski, of Clyde.

Last June James was enjoying a game of rugby in the weekend.

During the game he got ‘‘kneed in the back of the head’’ while at the bottom of the ruck.

The game stopped and the referee and coaches from both teams checked how he was.

Coach Duncan Randall said they conducted tests to check if James was all right which he passed, so he carried on playing.

About 10 minutes later however James hit his head a second time.

‘‘I got dump tackled and got whiplash,’’ James said.

James was ‘‘removed from the field immediately and monitored’’, Mr Randall said.

‘‘We said to him basically he needed to go the the medical centre and have a concussion test.’’

Mr Randall said they offered to take him, but James said he was going to wait for his mother to collect him.

James went off to the side and for the rest of the game he had his head in his hands.

‘‘I just looked at the ground and I couldn’t really remember much after that to be honest.’’

When his mother Kristy Velenski came to collect him after the game ‘‘he was like a drunk old man,’’ she said.

They did not know it at the time, but this was the beginning of a year of pain for James.

By the following Monday James was still not feeling well.

‘‘I remember going to the first class and I just sat there with my head in my hands.’’

His teachers encouraged him to go to the doctor’s clinic, where they assessed he was still concussed and needed to take a week off school.

Miss Velenski said this was not the first time James had experienced concussion — ‘‘as a rough and tumble boy’’ — there had been a few.

Other times when she had taken him to the doctors the advice had been to monitor him and make sure he was all right.

‘‘So I didn’t rush him to the doctor’s this time because I was just going to get the same old story,’’ she said.

But this time what began as just a week at home turned into 10 months off school, and a year of concussion symptoms.

Another episode was a further challenge for James when he was on holiday ‘‘up on the farm in the Maniototo’’ several weeks after the rugby game.

‘‘It was real cold and there was ice everywhere and I slipped up and hit my head.’’

James was referred to Southern Rehab, who worked with him to help with recovery.

He flew to Christchurch to stay with his father, which enabled him to be treated at their clinic, sometimes having appointments every day including physiotherapy, occupational therapy and memory tests.

But he did not seem to be getting any better — ‘‘If anything he was slightly getting worse’’, Miss Velenski said.

‘‘I couldn’t watch TV, I could only walk for about 20 minutes and I would be stuffed,’’ James said.

His balance was bad, he had sensitivity to light, was wearing a hat and sunglasses, even inside, and was taking 16 painkillers a day.

Finally, after looking online to try to find other solutions, Miss Velenski got in touch with the Brain Injury Association.

Liaison officer for the Otago region Cathy Matthews visited the family and was ‘‘a breath of fresh air’’, Miss Velenski said.

‘‘She was the rocket that got stuff moving.’’

Mrs Matthews was able to help find other solutions, including discussions with ACC and helping to get an appointment with Helen Tufui of the Headache Clinic in Invercargill.

‘‘Within the first session of James seeing Helen he was cured 90%,’’ Miss Velenski said.

The solution that seemed to work for James was treating it as a neck injury.

‘‘It is like we had two injuries — concussion and a neck injury.’’

Work on joint mobility and correcting James’s posture was the key to recovery for James.

James was now back at school and working to catch up on his schoolwork.

But he was still avoiding rugby for the moment, and his advice was to take concussion seriously.

Coach Duncan Randall said the safety of their players was paramount.

After his concussion event James had an ‘‘immediate stand-down of four weeks’’.

‘‘Before he even thought about coming back he had to have a medical clearance from a doctor, to show that he was not showing any signs or symptoms.’’

‘‘The welfare of our boys is always number one,’’ Mr Randall said.

Dunstan High School principal Reece Goldsmith said some creative use of funding, combined with James having a pretty clear view of where he was heading upon leaving school, had seen him placed in an independent programme, working in a quiet space with teacher support.

‘‘At the start of this year it was apparent that while James was ready to return to school, a ‘normal’ school programme would not have worked while he was still recovering.’’

‘‘He is primarily working on employment skills type work — he has already achieved his NCEA literacy and numeracy requirements — with an apprenticeship lined up at the end of the year,’’ Mr Goldsmith said.

New Zealand Rugby medical director Dr Ian Murphy said they advised coaches to tell their team to look after each other on the field. Everyone including players, coaches, managers and referees should know the signs of concussion. ‘‘We emphasise the four R’s — Recognise, Remove, Refer and Return.’’ If anyone suspects a concussion they should remove the player from play and refer them to a GP for medical attention, Dr Murphy said. New Zealand Rugby has the following best practice advice for any player:

★ Player is removed from field as soon as a concussion is suspected.

★ Player is monitored and sent home with parent with advice on what to do for the first 48 hours and told to see a GP.

★ Player sees GP — concussion is confirmed — player is provided with steps developed by NZR on how to get back to school and play.

★ Player follows the graduated return to play which all coaches in NZ have also been educated on.

★ Player is reviewed by doctor to meet the following criteria (returned to normal symptoms scores, completed the graduated return to play, returned fully to school or work, does not get symptoms when exercising) and are cleared to return to contact training or told they need more time.

★ If a player is cleared they can return to contact training.

The Brain Injury Association provides a free service including information and advice, and regular support groups in Wanaka and Alexandra. Liaison officer for the Otago region Cathy Matthews said referrals from a medical professional were not needed. ‘‘Anybody can just ring us up.’’ For further information email liaison.dunedin@brain-injury.org.nz , phone (03) 471 6156 or cellphone 027 303 7727