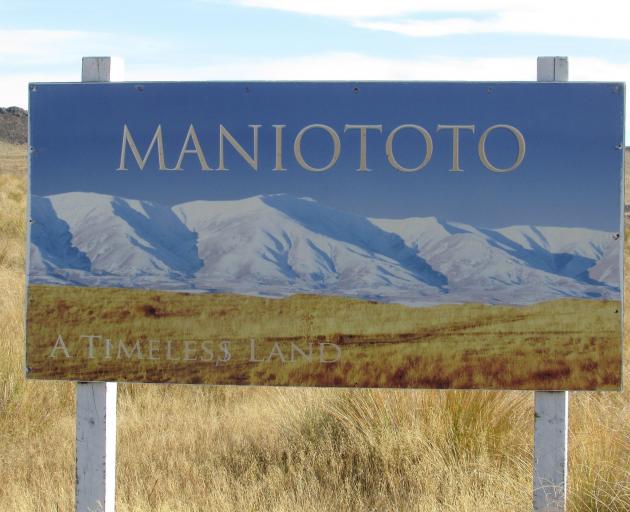 A dispute over the correct spelling of Maniatoto/Maniototo is not new and has been argued for almost a century.

Central Otago District Council chief executive Sanchia Jacobs said in a recent column that the council had adopted the Maniatoto spelling as historically accurate and it would no longer be called Maniototo.

She said that Maniototo had no meaning, relevance or value to manu whenua, whereas Maniatoto meant plains of blood, and referred to the red tussock that covered the landscape.

Any decision to amend the spelling of the names officially sat with iwi, Ms Jacobs said.

In 1928, the Honorary Geographic Board of New Zealand approved the spelling Maniatoto, but the county council was not pleased, she said.

It was believed that was because it had already installed a large sign with the alternative spelling.

The New Zealand Geographic Board was established in 1946 and in 1948 reaffirmed the Maniatoto spelling.

An article from the Central Otago News in August 1955 refers to the county council’s "silent defiance to the ruling of that august body, the New Zealand Geographic Board".

Ms Tamati-Elliffe said there were inquiries by the board on the topic every year until the 1960s, when it seemed to have given up.

She referenced a Kai Tahu atlas, available online at www.kahurumanu.co.nz and recognised by the New Zealand Geographic Board as an authoritative source of place names, that gave more than a thousand traditional names alongside citations.

"For our people today, post-settlement, restoring our language is very important to our identity," she said.

The disputed spelling of the Manuherekia/Manuherikia River is more straightforward.

Over 2018-19, the Otago Regional Council amended its spelling of Manuherikia to Manuherekia in its documents and communications, to reflect the traditional Kai Tahu spelling.

Iwi relationships and strategic stakeholders principal adviser David Cooper said the use of the Kai Tahu spelling was part of the regional council’s intent to deliver on partnership commitments to mana whenua based on the principles of the Treaty of Waitangi.

The Central Otago District Council also adopted the Manuherekia spelling, which Ms Jacobs said was the correct and authentic name for the river.

The decision was an operational one rather than one officially adopted by the council, she said.

Ms Tamati-Elliffe said "manu" meant "birds" and "here" "to snare or bind", and referred to the river as an important food gathering place.

Mr Cooper said there had been "completely understandable" concerns expressed about changes to place names, "given these are place names that people have grown up using, and which mean something to them, describing areas that are important to them".

"We’re not tone-deaf to the concerns that are being expressed and we’re not planning wholesale changes, but in the Manuherekia example we deemed adoption of traditional Kai Tahu spelling was an important step for ORC to take," he said.