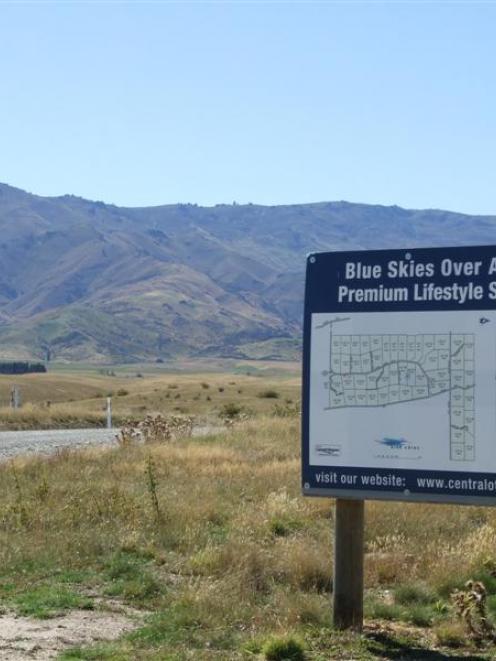 The Blue Skies subdivision at Springvale, near Alexandra. Photo by Lynda van Kempen.
Blue skies near Alexandra have turned cloudy for a Christchurch developer.

Paul Martin spent $10 million on infrastructure for his Blue Skies 50-lot subdivision on 500ha at Springvale, 14km from Alexandra, but said lifestyle blocks were the first to be "hit" during the credit crunch.

The company that owned the subdivision, Big Sky Developments Ltd, was placed into liquidation in December.

Mr Martin, who is the director and only shareholder of Big Sky, said the subdivision was made up of 50 lifestyle properties, ranging in size from 8ha to 10.5ha.

When it was first marketed two years ago, 41 of the lots sold unconditionally.

"Fourteen of the actual sales failed to be completed, so the potential buyers forfeited their deposits, but them settling in full for the properties was a critical part of the plan," Mr Martin said.

Twenty-three of the blocks were sold to Springvale Creek Ltd.

Mr Martin is also a director of that company.

Those blocks were under contract to a building company.

Blue Skies house and land packages were now being marketed from $399,000 each.

Mr Deuchrass said he was still gathering information on the company.

"We need to see that the company that is in liquidation has been paid for the sales of the property."

Mr Martin said he was disappointed at the lack of local support for his project.

All the sales had been to out-of-towners.

"They see the vision of what I was trying to do."

He had received no credit for enhancing the area, having invested $10 million in infrastructure, paying for the land, sealing Golden Rd, and providing power, telephone lines and water to the sites.