Curlers 'drop everything' for sport 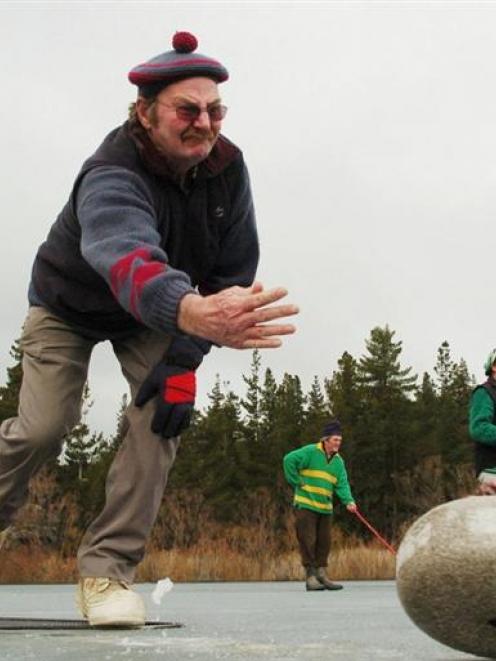 Ian Clouston (Chatto Creek). Photo by Gerard O'Brien.
Even a bad day's curling is better than a good day at work.

So say the lads from the Poolburn Curling Club, and they received no argument yesterday as 50 curlers took part in a mini-bonspiel on the lower Manorburn dam, near Alexandra.

The trophy goes to the winner of a one-day tournament contested once each season when there is enough ice on the Manorburn.

Defending champion Poolburn was the overall winner yesterday with 87 points, ahead of Chatto Creek on 78.

As play began in earnest yesterday, the rumble of granite stones sliding along the ice, the calls from the skips and the thud of stone hitting stone echoed around the basin.

With temperatures hovering just above zero, the ice was good in the morning but started "sweating" as the day warmed up a little.

There were no complaints from the curlers, who were happy to be playing for the rosebowl for the first time in two years.

"When it comes to curling, this is the real McCoy," Poolburn curler Al Williamson said.

He and team-mates Wes Flannery, Lindsay Scott and Shane Turfus agreed it was "the best sport in the world".

All were farmers, lucky to be able to "drop everything" and heed the call to compete - thanks to supportive partners and family, they said.

One of the Manorburn club's icemasters, Bert Kemp, said there was about 13cm of ice covering the dam, separating the curlers from "black and cold" water 20m deep in places.