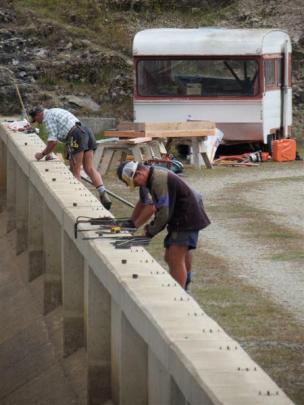 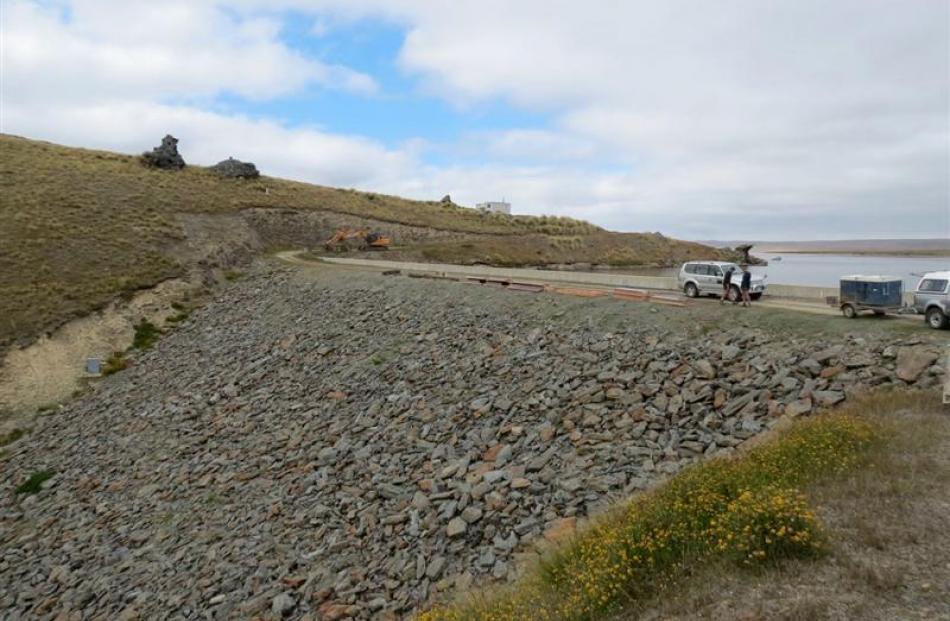 The downstream face of the rockfill dam, viewed from the left bank.

Work has finally started on raising the height of the Loganburn Dam at Paerau to boost its storage capacity - a project delayed for several years because of plans to construct the boundry's biggest wind farm nearby.

The $2 billion, 176-turbine Project Hayes wind farm was shelved two years ago, but it was one of the main factors in the delay to the dam project, Maniototo Irrigation Company Ltd chairman Geoff Crutchley said.

''Project Hayes involved plans to use the dam as an access for heavy machinery and there would've been modifications to the main approaches to the dam and its main accessways. It seemed wiser to hold off doing anything while those plans were active.''

Its original consents were from the Central Otago District Council, but law changes in the interim meant it had to apply to the Otago Regional Council for building consent.

It gained those consents recently and work began on the $160,000 project last week, Mr Crutchley said.

''The delays are disappointing and have caused us extra expense, but the project is finally under way now.''

The work is expected to take 10 weeks and involved raising the dam by 80cm by building an 80cm-high spillway and increasing the height of the coping wall along the top of the dam.

''That work is purely to improve the reliability of the scheme. What we want to do is squeeze a little bit more out of it.''

It would increase the storage by 11.5 million cu m. The dam, which was completed in 1983, stored about 85 million cu m of water.

''We'd anticipate [before the upgrade] the dam would fail to supply maybe one year in 10, but you get phases where we might have two or three years of rationing in a decade ... This gives us more potential storage on the occasions when there's a particularly wet spell. It's not going to fill to the top very often,'' Mr Crutchley said.

The dam, which is located on the southern end of the Rock and Pillar Range, about 12km south of Paerau, provided irrigation for 9300ha.

The modifications to the structure would not alter the area irrigated.

About 60 farmers were involved in the scheme and the irrigators would be paying for the dam project - ''in terms of cost benefit, for the $160,000,it's pretty good'', he said.

The Loganburn Dam is next to the Great Moss Swamp, which has been classified as a regionally significant wetland.

The Logan Burn feeds into the Taieri River.

TrustPower is permitted to generate power when water from the dam is released for irrigation.