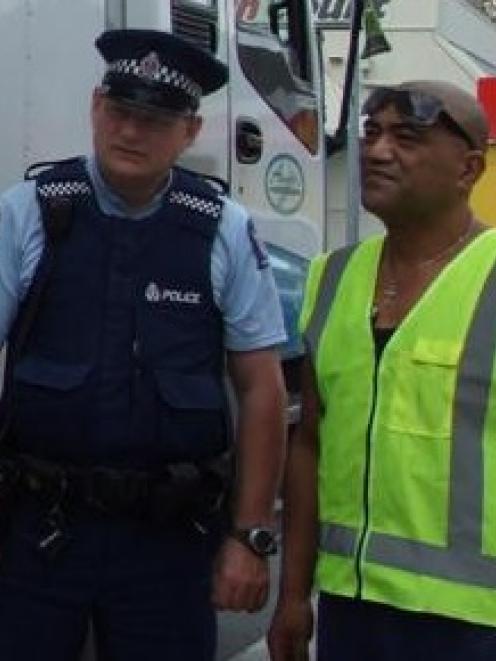 Senior Constable Mike Colligan and truck driver Vincent Pirikahu with Mr Pirikahu's vehicle. Photo by Lynda Van Kempen.
A Christchurch truck driver drove around Queenstown for several hours yesterday morning without realising taggers had painted a racist message on the side of his truck.

Vincent Pirikahu had parked his truck on Alexandra's Centennial Ave while he was staying in a motel on Tuesday night.

When he left town yesterday morning while it was still dark, he did not not notice a racist message had been painted on the truck next to a drawing of a noose.

"I'd been driving around Queenstown for a while and wondered why people were pointing their fingers at me," Mr Pirikahu said.

"Someone said `You better look at the side of your truck, mate,' and then I noticed it."

He was offended by the graffiti.

Senior Constable Mike Colligan, of Alexandra, said the tagging incident was one of about six in which similar slogans, swastikas and "white power" messages were daubed around Alexandra early yesterday morning.

Road signs, a fence next to pensioner flats in the town, the flats' mailbox, a caravan and another truck had all been tagged.

"It's obviously the same person or people because it's all done with black spray paint and similar comments and symbols," Snr Const Colligan said.

"We don't want tagging in our town so we'll be stamping on this big time."

Snr Const Colligan believed it was the work of visitors rather than locals.

He said the police wanted to hear from anyone who heard or saw anything suspicious around town early yesterday morning.