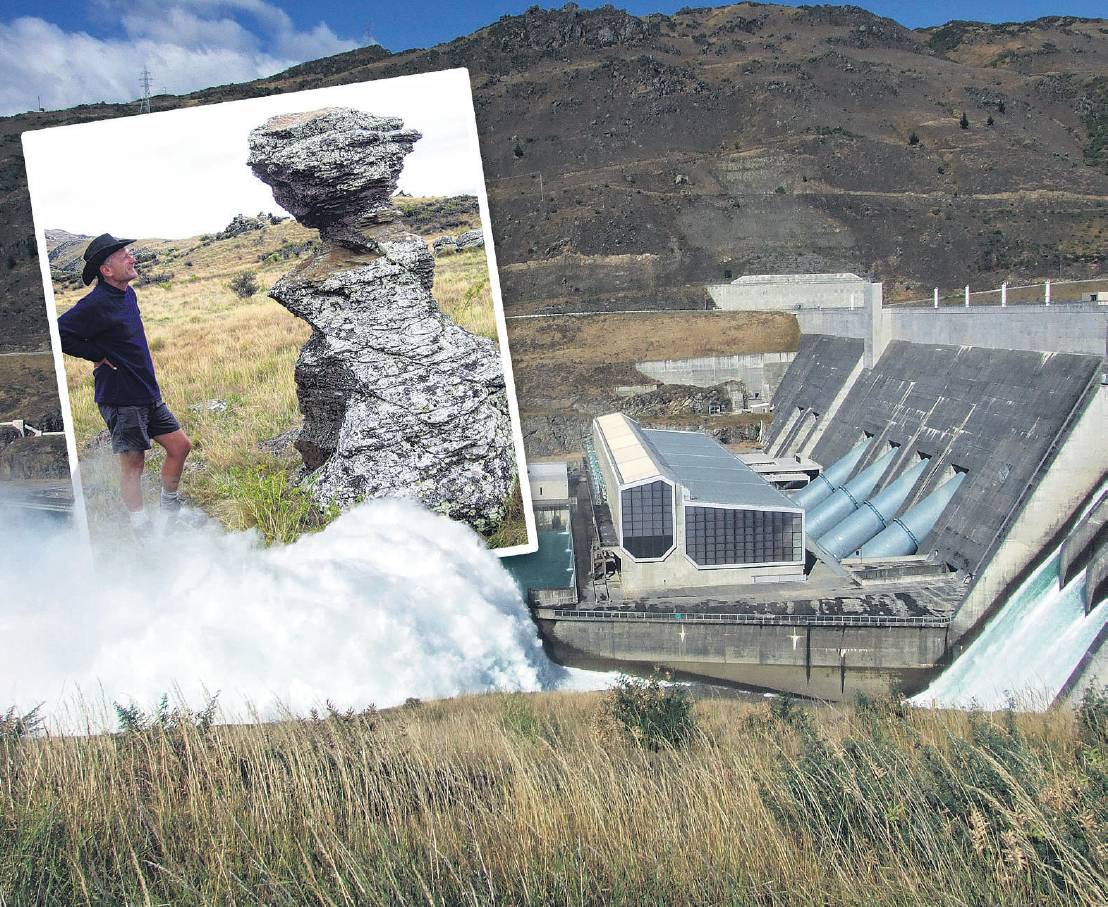 The Clyde Dam will stand the test of time, University of Otago Prof Mark Stirling says.(Inset) Prof Stirling examines one of the fragile geologic formations used to assess the new seismic design levels for the dam. PHOTO: ODT FILES and DAVID BARRELL
Checking the rocks near Clyde Dam to see if the towering concrete structure could withstand a devastating shake was almost too simple a plan.

But University of Otago earthquake science chairman Prof Mark Stirling had rather special rocks in mind. Seemingly gravity-defying rocks about 2km from the Clyde Dam in Central Otago, known as fragile geologic features (FGFs), were for the first time used to check the safety and seismic design of the structure — or any major structure.

The analysis of the 24,000-year-old rocks showed original hazard estimates for the site were way too strong for the rocks to have survived, Prof Stirling said.

Stemming from work that he began as a student in the United States under seismology pioneer and University of Nevada, Reno, Emeritus Foundation Prof James Brune decades ago, Prof Stirling along with New Zealand and international colleagues, identified the precarious-looking FGFs and determined what size of catastrophic event would be required to shake them down.

The team used the data to look at what had happened historically in the area and determined "how realistic" or reliable the present hazard assessment was.

Because of the downstream consequences of dam failure, dams were required to be "bulletproof" for very, very rare events, Prof Stirling said.

However, through the work the seismic design levels at the dam were reduced to 60% of the levels determined through the more traditional sophisticated calculations used in hazard assessment, he said.

"The move that our field has gone into is asking ‘Is there any way of making sense of these high numbers?’

"‘Is there any way of assessing how realistic they are or how reliable they are?’

"Let’s go through those sophisticated hazard models, but also use these rocks in the area to make sure the hazard analyses aren’t overcooking things too much.

"They’ve been through everything that could happen in that area," Prof Stirling said.

Beyond saving construction, or strengthening, costs for companies, Prof Stirling said he was pleased to prove the worth of what was once considered an outsiders’ fanciful idea.

The FGFs had gone from being a relatively fringe area of science that there was a lot of scepticism about, into actual design, he said.

As the researchers reported in the Bulletin of the Seismological Society of America, this week, the peak ground acceleration for the new Safety Evaluation Earthquake spectrum, developed from the rock data, as well as an updated seismic hazard model for the region, was significantly reduced compared with preliminary estimates developed in 2012.

Coincidentally, the levels dropped back to the original design levels of the dam.

Survivorship bias is a huge problem here? These FGFs survived some earthquakes, what about the ones that didn't? What was the starting population? If many similar structures were destroyed, and are long gone, studying the reminders could generate misleading conclusions.