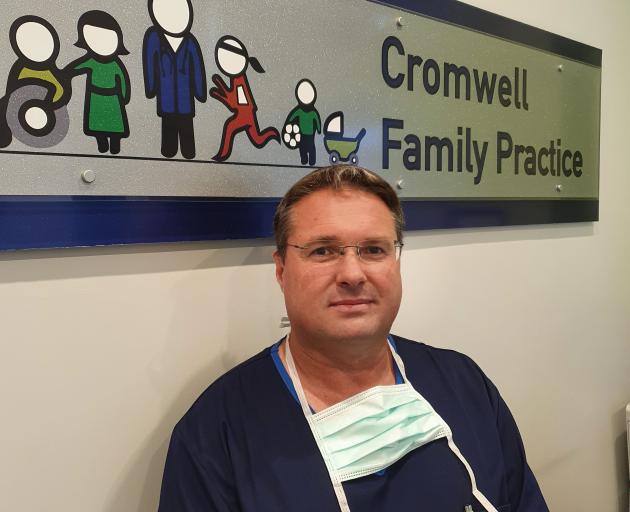 Greg White of Cromwell Family Practice. PHOTO: ODT FILES
A Cromwell GP says he was prepared to quit the Covid-19 vaccination rollout but remained out of concern for his patients.

Greg White was one of the first southern GPs to agree to offer Covid-19 vaccinations, but he and colleagues did so before any system was in place to reimburse medical centres for the work.

"We in good faith agreed to participate despite no guarantee of payments, but were told repeatedly, we could invoice for ‘all reasonable costs’.

Dr White has been a stern critic of how the Ministry of Health has handled the rollout and in particular its insistence on setting up its own booking system rather than allowing GP clinics to use their systems.

He said the amount of money his clinic had sought, about 10 hours of staff time in June, was not much, but he felt his and other centres were owed it on principle.

"We were told that a reasonable amount to invoice for was the base fee plus any reasonable extra, and that this included extensive staff training and technical requirements to access the Covid-19 immunisation register, plus booking patients in who couldn’t manage the booking system and sending out all the invites the DHBs asked.

"We then had the rug pulled out and were told only the base vaccination fee would be paid from now on, and we had to pay for all sharps after also being reassured this would be provided."

His centre only received a contract from the ministry eight weeks after it started vaccinating, Dr White said.

"So far we have had one payment but are unclear when the next ones will come.

"So it is a mess, but we will soldier on, but each week we have serious discussions about pulling out of the programme as it is so badly planned and implemented."

Ministry vaccination and immunisation programme lead Joe Bourne said that in April, in the early stages of the rollout, the cold store requirements then in place for the Pfizer vaccine meant it was not anticipated that general practices would be involved.

Once Pfizer relaxed that requirement, in consultation with primary care, a price per dose was developed, which the Southern District Health Board switched over to on June 1.

"Initial funding was based on a reasonable-costs basis while a population-based funding model was developed," he said.

"The price [for the per-dose scheme] is higher than that associated with other vaccinations because it recognises the additional complexity associated with the Pfizer vaccine."

An SDHB spokeswoman said that it was not aware of any GPs being out of pocket, and the organisation understood that all queries raised with it had been resolved.

The idea that instead of being on one data base, the covid vaccine rollout for millions of Kiwis should be on hundreds of different GP databases, is ludicrous. First, GPs complained they should be doing covid vaccines because it was so simple (despite at the time there not being enough vaccines for the wider rollout) , then they realised they had neither the staff nor equipment required for cold chain accreditation, then they complained they were too busy, then they complained they weren't getting enough help. Now they want to use hundreds of different databases?

I got an email stating I could book my jab from the platform my Dr uses. When I clicked the link it said warning dangerous route or something that would make those less comp savy unplug their pc thinking they had downloaded a virus in a scam. Inspiring.

Sounds to me that you were scammed. The official authorities are not using Dr's platforms. Any link that suggest you can is highly doubtful.

In a situation like this speed is the key. The ministry needs to engage with the GPs to get the maximum community coverage. The GPs already do flu vaccinations and get their payments for this work from the ministry using existing systems. They are also much more aware of the needs of their patients. This top down approach from the ministry is simply too slow. We need this done before delta arrives otherwise the country will face another level 4 lockdown. We can't afford that to let that happen again.