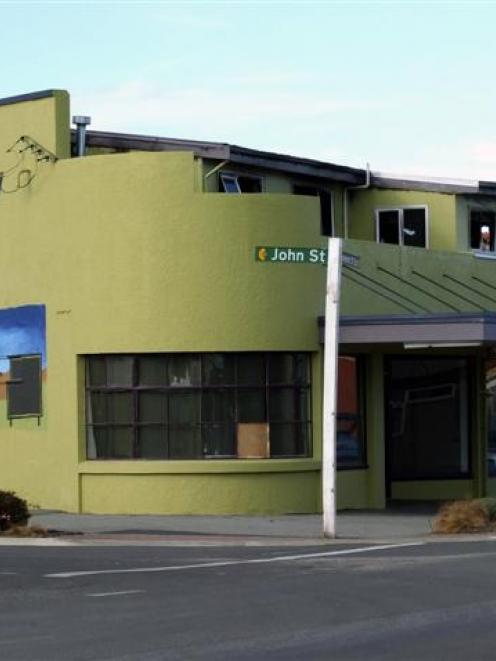 The Ranfurly Auto building. Photo by Lynda Van Kempen.
Rural Art Deco Maniototo will investigate the extent and cost of work needed to save the facade of a distinctive curved building which was damaged by fire earlier this year in Ranfurly's main street.

The commercial property owned by Dick and Janet Parker housed their two companies, Ranfurly Auto and Ranfurly Bike Hire, as well as the couple's residential apartment.

It was destroyed on March 8 in a fire thought to be the town's largest structure blaze in three decades.

The back of the property was cleared but the facade of the early 1950s building remains standing.

A meeting was held recently between the Parkers, chairman of the Maniototo Community Board Richard Smith, community and economic development co-ordinator Amie Pont, of Project Maniototo, and the Rural Art Deco Maniototo committee.

It was agreed that the Art Deco group would look into the possibilities for the site, group chairwoman Diane Paterson said.

"Given this is a significant Art Deco building for Ranfurly with its distinctive rounded and windowed corner it is hoped that the facade can be saved and then plans developed for how the remaining site can be used, " she said.

The groups involved in the meeting and members of the public said the building was important for the economic and social wellbeing of the Maniototo community, Mrs Pont said.

The Parkers were happy for the Art Deco committee to begin a feasibility study of the site, with a focus on the extent and cost of work needed to save the facade.

"There's been a fair bit of public interest in what's happening with the building so we want to explore all the avenues for it," Mrs Parker said.

"It ... would leave a gap if it went. I wouldn't mind a dollar for every time it's been photographed by visitors.

"It certainly appeals to people," she said.

The couple have decided not to rebuild on site but have yet to decide whether to continue operating Ranfurly Auto from other premises.

Ranfurly Bike Hire has been relocated to a rental property.