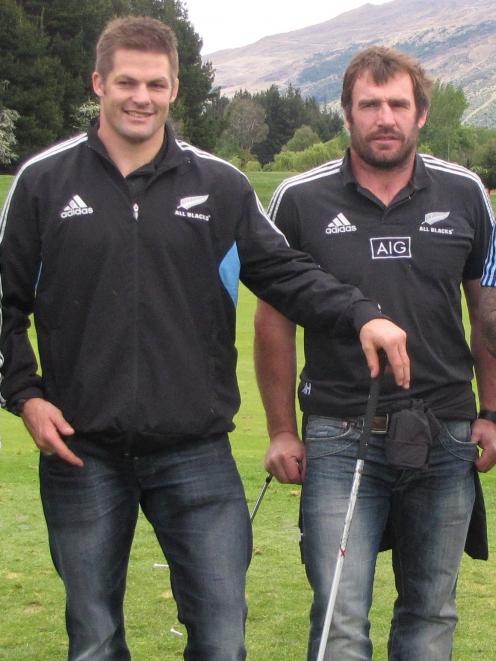 Former All Blacks captain Richie McCaw (left) and Andrew Hore relax during a game of golf in Queenstown in 2013. Photo: Tracey Roxburgh.
In October last year, former All Black and Central Otago resident Andrew Hore had his firearms licence revoked by police. It came after a man was accidentally shot on his property on the first day of the duck-shooting season last year. Rob Kidd reports on how the former rugby player has called in the big guns in a bid to have his licence returned.

When Andrew Hore lost his firearms licence he called on his old mate and former All Black captain Ritchie McCaw to help him out.

And it was not just the recently retired rugby star who spoke up on Mr Hore’s behalf; a member of the All Blacks’ management team, a police officer of 22 years and a Central Otago district councillor also came to his aid.

The former Highlanders hooker, who made a cameo appearance in Otago’s NPC Championship final loss last month, was stripped of his licence after an incident at his Patearoa farm on May 2, 2015, where a man was accidentally shot in the arm.

Mr Hore took his case to the Dunedin District Court where the appeal against the police’s decision was heard this week.

His lawyer, David Robinson, spoke of the glowing references provided to the court on his client’s behalf but it was only clear how wide-reaching those supporting documents were after the ODT was granted access to the file by Judge Michael Crosbie.

A certain Richard Hugh McCaw, who describes himself as a "company director residing in Christchurch", provided a letter and an affidavit for Mr Hore in which he called him a "careful and competent" gun user.

The All Black icon of 148 caps compared his friend’s attitude on the pitch to how he acted with a rifle.

"Although he enjoys a laugh, when it comes to doing things right in these type of circumstances, I must say I saw the same attitude he displayed for me in the rugby teams we were involved in. I relied on his knowledge and maturity a huge amount especially when times of pressure arose to navigate through these times, help us get the results we were after on the rugby field ... these type of attitudes are similar to the ones I observed when we were using firearms," Mr McCaw wrote.

During the incident which saw Mr Hore lose his licence, he and five friends had spent the day duck-shooting but their fun ended abruptly when one of the group — Daniel Parker, whose firearms licence had been previously revoked — was shot in the arm.

Mr Hore  and others told paramedics three of them had fallen from the back of an all-terrain vehicle as they drove over uneven ground, a firearm also came off and discharged, hitting Parker.

But police remain unconvinced about the story and deemed Mr Hore not to be a fit and proper person to use firearms.

Before losing his licence he was convicted in the Alexandra District Court of supplying a firearm to an unlicensed person and was fined $400, with court costs of $130.

An appeal against the conviction in the High Court was unsuccessful.

And it was not just former teammates Mr Hore called on.All Blacks mental-skills coach Gilbert Enoka also lent his voice to those who backed the 38-year-old, calling him "honest, loyal and reliable".

"As a professional sportsperson he has been subjected to huge periods of pressure — both on the field and off it — and he has navigated these periods stoically. In fact he has been a pillar of strength to those around him that have often wobbled somewhat. There was a high degree of media scrutiny attached to his role as an All Black and within this bubble Andrew exhibited a calm demeanour, and coped well with all the associated pressures," he wrote in an affidavit.

Central Otago district councillor Stuart Duncan knew Mr Hore from their school days together.He told the court the two of them hunted at least 30 times a year and he trusted  Mr Hore to supervise his two children when using firearms.

"From the moment he picks up a gun he does everything right," he wrote.

Mr Duncan was also keen to point out the costs Mr Hore would incur employing contractors if he was unable to shoot pests on his "rabbit-prone property".

He said the pair had worked together over farm thefts and poaching but Mr Hore never lost his cool.

"I have always been impressed by the sensible and restrained attitude Andrew has adopted when dealing with these issues," he wrote.

In court this week Mr Robinson questioned Inspector Olaf Jensen, who was responsible for Mr Hore’s firearms licence being revoked.

He asked whether it was true Snr Const Burke was now facing disciplinary proceedings over the reference letter.

Insp Jensen said he could not comment on individual employment matters but police officers in general were instructed to avoid "conflicts of interest".

In his own affidavit to the court, Mr Hore also mentioned the plight of Snr Const Burke.

"I was surprised to learn that he is now being subjected to a ‘code of conduct’ inquiry by his police superiors after writing in support of me."

In the affidavit, Mr Hore also describes how he was taught how to handle firearms at the age of 10 by his father.

He detailed the weapons he used on his  18,500ha  farm known as "Stonehenge".

Among the seven firearms are shotguns for pest control and rifles for hunting, as well as a .223 that had been given to him as a present to mark 50 All Black tests.

Mr Hore’s statement deals with the now infamous seal incident from 2005, too.He wrote that the shotguns were only in the boat on that occasion because he was uncomfortable leaving them visible in a car.

"At some point we made the foolish decision to fire at seals. I fired four shots," Mr Hore said.

"I simply didn’t know that it was unlawful to shoot seals."

He outlined for the court how important for pest control and livestock euthanasia it was for him to have a firearms licence while running his farm and said the court proceedings had emphasised the seriousness of safety.

"I regret the shortcomings that have led to this, and confirm to the court my resolve to ensure firearms are used safely."

"To date the alleged accidental discharge of the firearm cannot be explained," police say.

When questioned, Mr Hore and the five other men on his property told the same story: three of them fell off the back of an all-terrain vehicle, a firearm went off and one of them was shot in the arm.

No spent cartridge was found in the area and the firearm which supposedly discharged was examined by an armourer and found not to be defective.

"The only evidence at the scene was flesh belonging to [Daniel] Parker that was observed by the attending ambulance officers, adjacent to where Parker was attended to. That flesh was among the tussocks," Insp  Jensen said in an affidavit.

The officer admitted in court he was sceptical of the ex-All Black’s version of events.

"His account is rather vague and lacking in detail," Insp Jensen said.

One of the ambulance officers who arrived to treat the injured man said comments were made in her presence about "keeping to the story".

She described the men as highly intoxicated, with one of the party even stumbling over to Mr Parker as he lay on the ground and slapping his face.

Mr Hore said he had only consumed six to eight stubbies in the nine hours before the incident and had put on a "large hot meal for lunch" of chips, pies and sausages.

While being taken to hospital, Mr Parker later admitted he had consumed bourbon during the day.

"Duck-shooting is a social event. There is always some alcohol consumed. It will be the same in almost every mai mai across the country," Mr Hore said in his affidavit.

But he stressed: "we were not intoxicated".

The night before the shoot, he had left firearms unattended in a maimai, which he admitted was a breach of the Arms Act.

However, he wrote in his statement that he considered his actions did not constitute a flagrant breach of safety protocols, "given the remote location" of  the hut.

Judge Michael Crosbie will consider the evidence from both sides before ruling on whether Mr Hore’s firearms licence should be reinstated.

He is not required to determine how Mr Parker was shot.

The judge told the court he expected his judgement to be available in a couple of weeks.