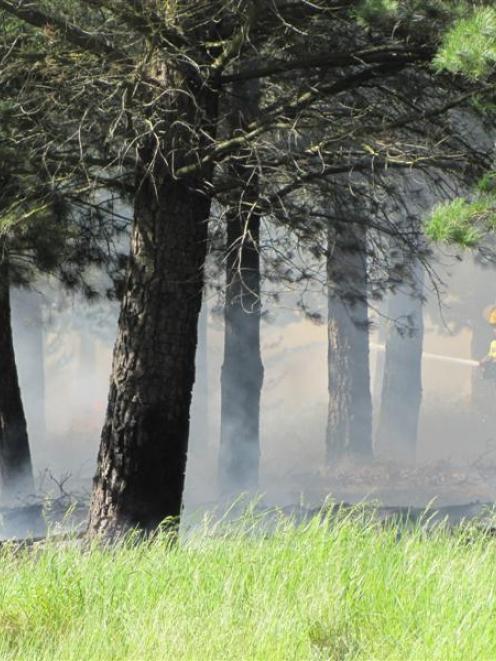 A firefighter tackles one of fires in the Pines reserve north of Alexandra yesterday. Photo by Sarah Marquet.
Several scrub fires caused by hot ashes flying from a rubbish truck broke out along State Highway 8 between Alexandra and Clyde just after 4pm yesterday.

The Alexandra and Clyde Volunteer Fire Brigades as well as the rural fire crew and Department of Conservation (Doc) - because it was within 1km of Doc land - attended the fires with more than 30 firefighters, five fire engines and several tankers.

Doc Central Otago manager Mike Tubbs said he was not sure how the fire started but believed it was "with or near a vehicle" and an investigation would follow.

Liz Pratt, wife of rubbish collection contractor Lindsay Pratt, confirmed to the Otago Daily Times when contacted last night the fire was started by hot ash being carried in the rubbish truck. Mr Pratt had driven to Dunstan Hospital in Clyde to empty the ash bins and was on his way back to the Alexandra transfer station when hot ashes must have flown from the truck and set fire to grass along the side of the road.

Mr Tubbs said the section of the fire in the Pines reserve near the Alexandra golf course was burning at three points which covered "about half a hectare".

Alexandra Chief Fire Officer Russell Anderson said they used "quite a few tanks of water" which each held "about 6000 litres".

Clyde Chief Fire Officer Richard Davidson said the Clyde crew was called to two fires but found them to be an almost "continuous string" from around the intersection of SH8 and the airport road, down to the Alexandra golf course where the other fire was.

He did not know the size of the area these fires covered.

Although the smoke was being blown away from the road, the road was closed by police while the fires were controlled.

One lane was later opened, and then the other once the fire was extinguished.

Mr Davidson said even though there had been a lot of rain lately and it was a restricted fire season it was still particularly dangerous, especially with the strong winds common at this time of year.

• Another fire occurred shortly before 2.30pm on Earnscleugh Rd. Mr Anderson said the wind had felled a tree which landed on power lines and snapped them.

They then sparked and set fire to a small pump house and surrounding vegetation.

The fire brigade had to wait for "10 to 15 minutes" for two Delta linemen to arrive to cut power to the lines before it could put out the fire.

Mr Anderson said the tree had possibly been weak and dying and it was a windy time of year.

"It's Murphy's law that they [trees] always topple into the lines."

One fire engine and a rural tanker attended the incident with 10 men.

Mr Anderson said it took 45 minutes to extinguish the fire.