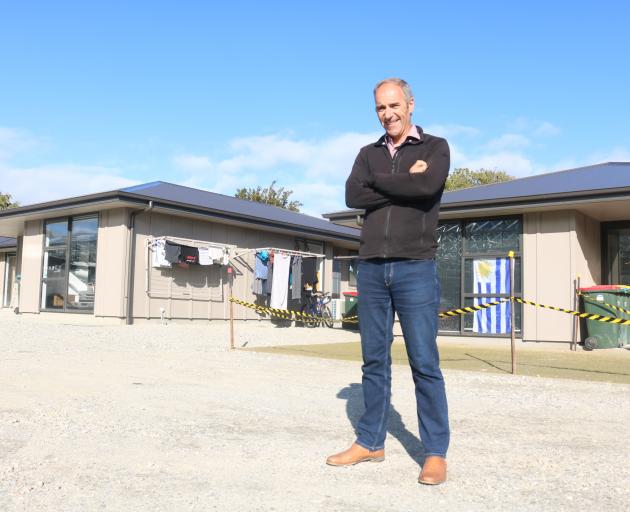 Otago Polytechnic Central Campus head of school Alex Huffadine says the new accommodation complex is part of a $3million redevelopment plan for the Cromwell campus. Photo: Tom Kitchin
Forget being stuck in a cold, damp house as a student in the infamous Central Otago winter.

An accommodation block for 25 students was built over spring and summer.

Construction started in October and finished in February.

Students moved in at the start of the academic year to fully self-contained units - beds, desks, cutlery and crockery were all provided.

''They can literally just arrive off the plane,'' Central Campus head of school Alex Huffadine said.

There are five units and each unit houses five students.

As of yesterday, 18 students were living in the complex and Mr Huffadine expected it to be full in two weeks.

Mr Huffadine said the new accommodation blocks were the first of their kind on the Cromwell campus.

''Accommodation is one of the biggest pitch points of [student] recruitment.''

The accommodation was part of a larger $3million redevelopment of the entire Cromwell campus.

Mr Huffadine said the main campus should eventually move from the corner of Erris & Ray Streets in the township to a new site on Bannockburn Rd, the main road between Cromwell and Bannockburn.

He hoped that in the next two years, the town site would be mostly, if not all, accommodation.

''Our buildings [on the town campus] are not fit for purpose now. You need a modern environment for learning today. A redevelopment will keep maintenance costs low.''

Part of the redevelopment would include building a new Trades Academy on the Bannockburn site that was planned to be built by July.

Yesterday, the Otago Daily Times reported the polytechnic received a $175,000 grant from the Central Lakes Trust for tools and equipment at the academy.

The Central Campus has the equivalent of 220 full-time students which equates to 600 enrolments.

The polytechnic also opened a new accommodation complex in Dunedin - Te Pa Tauira - at the start of this year.