Music festival declared a hit by all 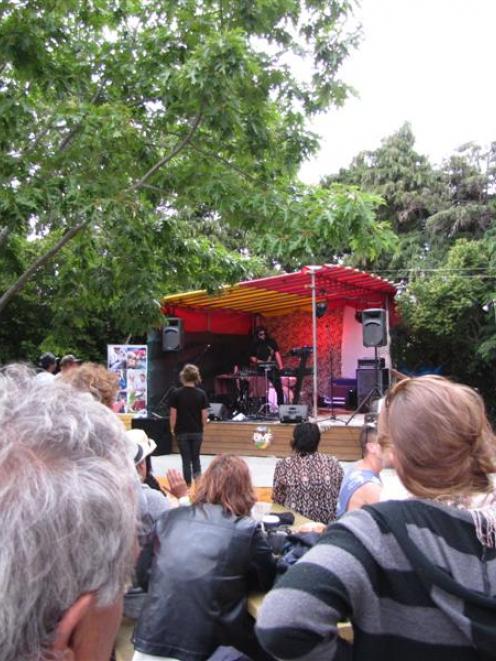 Civilian Sol (Dannevirke L'Hiboux, of Wanaka) played a late-afternoon set at the Banny Music Fest. Photo by Sarah Marquet.
Despite a few hiccups - such as the pub running out of beer - the inaugural Banny Music Fest has been declared a great success by its organisers.

Fourteen bands from Otago and Southland played to a capacity crowd at the free event hosted by the Bannockburn Hotel on Saturday.

At its peak, by mid-afternoon, about 400 people packed into the hotel's beer garden but about 750 adults, plus children, experienced the 11-hour event.

''It was just awesome. Well over and above our expectation,'' organiser Blair Scoullar said yesterday.

He and Some What Damaged bandmate Wade Hutchinson had conceived the festival after discussing how nice it would be to relax with a drink and watch a few other local bands.

Their band performed at noon to open the festival and was followed by the likes of the Junction, Ropatah and the Zuchinni Bros.

The final band to play, after a few technical issues, was Panther Claw, of Queenstown.

Although the music side of the festival went almost without a hitch, it was not quite the same for the bar. Bannockburn Hotel manager Bron Stewart said it ran out of beer and had to get more kegs in and, due to health and safety issues, had to stop admitting people at the festival's peak until others left and there was room.

''It was starting to get a bit crowded ... Because of health and safety we were being a bit cautious, especially because it was the first time.''

Despite that, ''it was just fantastic, the crowd was fantastic, everyone behaved themselves and the atmosphere was just wonderful'', she said.

On a normal Saturday the pub would sell about 100 meals but during the festival it tripled that amount, she said. It also sold 17 kegs of beer.

Although the festival was free, people were asked to make a donation to St John. About $1000 was raised.

Both parties said they were keen to hold the event next year.